On Ismail Merchant and his book Passage From India, and the actor in him 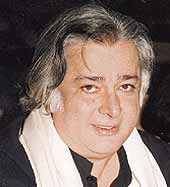 Has he left the real Ismail Merchant in the book?
It would have been a big fat book if he put in everything and anything from his life of 66 years.

Has he been too nice?
The book has some very interesting and true anecdotes. Some people have been hurt.

What would you have added to the book?
I would have said (he laughs) that he is dreadful, a disgusting Hitler-type of producer. But saat khoon maaf hain when I realised that his intention is to make a good film. You forgive him and all his bulldozing ways.

It has brought Ismail, James Ivory and you together after a long time in Delhi. Any nostalgia moments?
It is very nice. We are here after 41 years, when we were making the Householder.

All of you were planning to go to old Delhi where the film was shot.
We were. Unfortunately we just discovered that the owner of 7/7 Daryaganj, Inder Narayan, is no more.

Has Ismail mellowed, and how has Ivory changed?
Ismail seems to have mellowed, and Jim is growing, I won't say old, but maturing beautifully in both looks and wisdom?

And Shashi Kapoor? Mellowing?
I am 65, I will be on March 18. I am a grandfather five times and I hope I will be many more times.

Do you see more of your father in you as you grow older?
I don't have his strength and wisdom. He did so much.

You've started travelling again.
I want to. Recently I went to Ranthambhore to say hello to the tigers. On the first day I saw 20 of them.