Sharon's Stone On Our Heart

As Delhi prepares to welcome the Israeli PM, it wilfully forgets his past for its own interests Updates 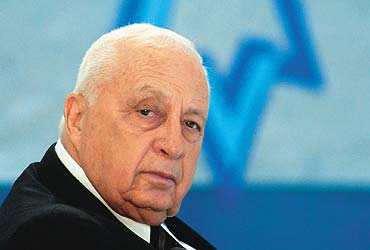 outlookindia.com
-0001-11-30T00:00:00+0553
When Israeli Prime Minister Ariel Sharon, best remembered in most parts of the world for masterminding the massacre of Palestinians in the Shabra and Shatila refugee camps in Lebanon, lands in New Delhi, he’ll be the establishment’s toast. Elsewhere, demonstrators will have marked his arrival with protests, in New Delhi, Agra, Mumbai, and even in Thiruvananthapuram and Calcutta which he won’t be visiting. Many even argue that Sharon makes Slobodan Milosevic look like a saint.

It’s a sensitive point for many who are watching from the sidelines. Asks M.H. Ansari, a former permanent representative to the UN: "If an individual is so tainted, what signal are you sending to the world on the Palestinian question? After all, you were party to all resolutions against Israel, including the one on the Shabra and Shatila massacres?" As Israel’s defence minister in 1982, Sharon oversaw the invasion of southern Lebanon that resulted in the killing of over 2,000 Palestinians by Christian militias backed by Israel during the long night of the Lebanese civil war. The Security Council condemned it as a criminal massacre through its Resolution 521 (1982) adopted unanimously.

In diplomacy, though, you can’t always display your disquiet or moral positions. jnu’s P.R. Kumaraswamy points out: "As Indians we can’t pick and choose leaders of other countries. After all, Sharon is a democratically elected leader. If you can shake hands with Musharraf who was responsible for Kargil, why not Sharon? If PLO’s Abu Mazen can deal with Sharon, what’s your problem?" But there’s no denying that Sharon’s visit is yet another defining moment in India’s pragmatic tilt in foreign policy that includes, among other things, dumping the Saharwi Arab Democratic Republic (a western Sahara region fighting Moroccan occupation), cosying up to the Myanmarese junta and conceding Chinese hegemony over Tibet with an astonishing explicitness.

Attempts to justify Sharon’s visit has some drawing a parallel between Kashmir and Palestine. A government official, however, points out: "On his recent visit to New Delhi, Palestinian foreign minister Nabil Shaath said there was no legitimate comparison between Kashmir and Palestine. What’s happening in Palestine is occupation." It was not surprising, therefore, when National Security Advisor Brajesh Mishra, in his zeal to promote the idea of a US-India-Israel trilateral axis, deliberately forgot to mention the occupation of Palestine as he waxed lyrical about "fundamental similarities" between India, the US and Israel at the American Jewish Committee meet in New York this May.

True, yet critics point out that Sharon has visited just four countries—the US, UK, Turkey and Norway. With India becoming the fifth country to welcome him, it isn’t surprising to find critics perceive a decisive swing towards Israel—and, consequently, away from Palestine. In the popular perception, the problem of terrorism, despite the sharp differences in its nature as it exists in India and Israel, inspires many to see a convergence of interests between the two countries. Sharon’s senior advisor Ra’anan Gissin says: "There’s a basic understanding and agreement between Israel and India that despite the fact that circumstances surrounding the nature of the terrorism we face are different, one can’t compromise with terror." This is precisely the comment that would gladden the Hindutva brigade that wants India to emulate Sharon’s Israel.

It’s difficult getting a fix on India’s defence relationship with Israel. Israeli and Indian officials tend to focus narrowly on achievements in the civilian aspects. They point to the fact that bilateral trade (excluding defence and tourism) has swollen enormously from a modest base of US $200 million in 1992 to US $1,273 million in 2002. During Sharon’s visit four agreements are likely to be signed on health, drug trafficking, environment and visa-free travel for officials.

But the question most would want to know is: is the Phalcon deal final? Says Gissin: "Phalcon is a trilateral deal involving the Russians, Israel and India. The deal will go through because there’s no objection by any of those involved." Israel has been concertedly trying to sell defence equipment to India and its agents have swamped Delhi’s arms bazaar. As one Indian defence official points out, "Jerusalem has been a holy city for Christians, Muslims and Jews. Lately, it has also become a holy city for the Indian armed forces."

Gissin hopes Sharon’s visit would "pave the way for a better understanding of Israel" among Indians who are unaware that it’s a "peace-seeking country".

By V. Sudarshan and Pinhas Inbari in Jerusalem