Shards From A Lost Script

What does the IGNCA actually do? Why is it always mired in controversies? 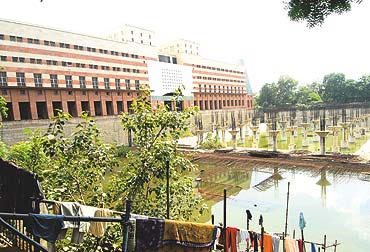 The Indira Gandhi National Centre for the Arts (IGNCA) has a talent for making news for the wrong reasons. This talent came into full play earlier this month when its staffers celebrated victory in a long-running turf war with the National Manuscripts Mission (NMM), with the usual leaks to the media

and whispered allegations about financial irregularities. In the past, such talk has centred on IGNCA's own workings. However, the subject this time was the NMM, which is said to have ignored financial procedures and norms.

In essence, however, this is a battle for territory. The NMM was set up in 2003, with IGNCA as its nodal agency. Along the way, the mission, which is housed in an IGNCA building, managed to slough off its subordinate status (with more than a little help from the department of culture) and functioned autonomously, leading to a slew of complaints from the IGNCA to the government.

While speculation is rife about why NMM finally lost the battle with IGNCA (the department of culture has now put the mission firmly back in IGNCA's control), the controversy has also turned the spotlight on IGNCA itself, increasingly characterised as a lumbering, reclusive and inscrutable giant on a downward spiral. What has struck observers—and judging by the comments of some staffers, rankled greatly within IGNCA—is that the NMM managed to generate a buzz around its activities that IGNCA has rarely achieved, or even tried to achieve. NMM celebrated its milestones in documenting manuscripts across the country, held well-curated exhibitions, has even been sending out regular newsletters to the scholarly community. Said a wellknown scholar wryly: "Whatever the rights and wrongs of the matter, the fact is, we heard from the NMM. We never hear from the IGNCA."

The NMM's director, Sudha Gopalakrishnan, who resigned from her post in early September (six months before the her term ended) saying she couldn't work under a "dysfunctional" IGNCA, also delivered a few parting shots. "IGNCA has, in recent years, plumbed the depths of non-performance. It has not taken any cultural initiatives—academic professionals who worked for it have left in frustration," she told Outlook. Gopalakrishnan denied financial lapses and said she quit because "NMM needed flexibility and functional autonomy to carry out its action plan, which has now been taken away. Now the IGNCA culture will prevail over NMM, and derail what we have done".

The IGNCA was conceived on a grand scale, as a major resource centre and research organisation for the study of all the arts, from fundamental classical texts to oral traditions, from literature to the entire range of the visual and performing arts. It was also meant to be a vibrant forum for performances, exhibitions, multi-media projections, conferences, seminars and workshops on the arts, for dialogues between the arts and other disciplines; and (rather ironically in hindsight, given its own series of crises) to evolve models for arts administration in India. The physical home of this vast array of activities was to be a mammoth eight-building complex on 25 acres of prime land on Delhi's Central Vista, designed by Ralph Lerner, an American architect selected through an international competition. It was meant to be completed—and this is a date that raises a laugh or two today—in 1993. 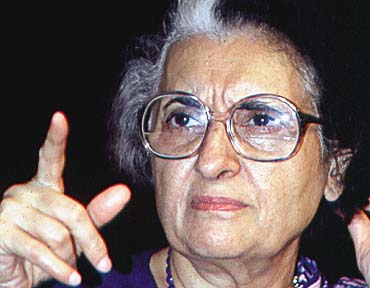 Today, the vast site, an eerie enclave of silence in the heart of the capital, speaks eloquently of ambitions that have crashed to the ground. The reasons stretch from unrealistic proposals to mismanagement and lack of funds. While the IGNCA has received huge amounts of taxpayers' money—Rs 100 crore for its building works, Rs 50 crore for a corpus to run the place, another Rs 4 crore in smaller payouts—funding did not keep pace with its needs. Neglect was marked during NDA rule when the IGNCA was identified as a political foe due to its links with the Gandhi family. (Its board was also shaken up, and its work went into a limbo.) But curiously, the neglect has continued well into UPA rule. The Rs 90 crore promised to IGNCA by the Centre in the 10th Plan (2002-07) is yet to materialise.

Today, only one of Lerner's buildings is up and still only partly running. This centrally air-conditioned behemoth, its interiors boasting giant pillars and cavernous halls, soaks up a large chunk of the Rs 1.25 crore spent annually on basic upkeep of the IGNCA. (Maintainence and the salary bill eat substantially into earnings from its corpus.) An entire wing of this building is non-operational for logistical reasons—24 guestrooms within it meant to house visiting scholars are yet to receive their first guest. Next to this building are the steel entrails of a construction site, sticking out of the ground amid large pools of muddy water; a contractor, who alleges non-payment of dues, has occupied a part of the adjacent grounds while a court battle is on. The rest of IGNCA is housed in partitioned colonial structures that were supposed to make way for new buildings. Plans have now been drastically scaled down—the construction site will become an underground parking lot, instead of the administrative block originally envisaged. Planned galleries will not be built, and the newly-appointed board of trustees, says the IGNCA's new president, diplomat Chinmaya Gharekhan, is now looking for private funding for the construction of an auditorium, which will be shared with the funder in a "public-private partnership".

The IGNCA's intellectual infrastructure is also in poor shape. Of the 250-odd staff, less than one-tenth are research scholars, mostly young scholars still establishing themselves. Of nine posts of professors, five are vacant. An IAS officer, K.K. Chakravarty, who also has a scholarly background, oversees both administrative and academic work, as member-secretary of the IGNCA's trust, and CEO of the centre. The post of academic director, once held by Kapila Vatsyayan, who conceived IGNCA, has been abolished.

Chakravarty maintains that despite financial constraints, the IGNCA's creative and research output has been impressive. In a conversation with Outlook, he detailed projects in areas including Vedic chanting, rock art, Indian diaspora studies, culture and gender studies, identities in the North East, under the unifying theme of "relationships—across disciplines, communities, faiths, cultures". However, scholars and art historians and even a trustee of the centre took the view that the IGNCA's recent activities have lacked cohesion, rigour and institutional vision. Said the trustee: "Kapila Vatsayayan had a vision, whether you agreed with it or not. Today, the agendas and lists of activities of the IGNCA look serious but in reality the output is patchy. Its esoteric and marginal exhibitions electrify no one. Its events are random, and have a sarkari feel to them. There is no sense of the centre energising the cultural life of the city."

Commented an eminent scholar and art historian, "An advanced research institution should have a different quality of research output. The IGNCA once had a very good publications programme, centred around fundamental texts, and organised notable exhibitions on philosophical themes, but its recent work is scattered and simply not of that calibre." He also pointed out: "Many of the best international and national scholars come to Delhi but the IGNCA is not on their map."

Gharekhan defends IGNCA's output, but does concede shortcomings. "The centre has not been alive to the task of explaining what it has done. Academics and scholars here have taken the line that it is a research-oriented institution and publicity and public relations is not our concern. I take the line that the taxpayer's money is being spent here, and people have a right to know what is going on". He promises to initiate activities that will make people "aware of the existence of IGNCA". With a new board of trustees, and with a promised infusion of funds—a projected Rs 147 crore in funds in the 11th Plan, of which Rs 12 crore has recently been received—perhaps IGNCA has a chance to prove it can make news for the right reasons. But first it has to find its way.