Omar's arrest is no end of the trail, it still doesn't tell us if Pearl's dead or alive 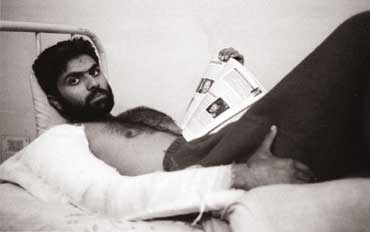 But what Omar told the court sent a frisson of fear and disappointment among the assembled journalists and officials. This was the moment Karachi—and the world—had been waiting for; this was possibly the chance to know where the kidnapped Wall Street Journal reporter Daniel Pearl was. And Omar dashed the hopes in a jiffy. "As far as I understand, he's dead," declared Omar, accused of kidnapping Pearl. Accused? No, not really, in fact he is the guilty. He told the judge as much, "Yes, I kidnapped him. I know he's dead. I will not defend the case." The police managed to get him remanded for 13 days.

Ordinarily, in most criminal cases, this is reason enough to celebrate. But not this time. The world media was asking the question: is Daniel Pearl dead? A few hours later on the same day Sindh police chief Kamal Shah held a press conference to explain why Omar's statement should not be believed. For one, Shah pointed out, Omar's confession didn't have legal validity (it wasn't made under oath), that it could not be used against him in a legal case. In other words, Omar could afford to be sensationally reckless. Second, and more important, the police chief pointed to the sheer welter of contradictory statements Omar had been making. He had earlier told them that Pearl was alive, that he (Omar) was the mastermind in the sensational kidnapping case but didn't know where the journalist was, that he could talk and convince the abductors to release their victim. Conclusion: don't declare Pearl dead until his body is found. At the time of writing this report, this argument was the only tenuous reason to hope Pearl was alive.