With the assembly polls closing in, the party's hunting hard for a vote-worthy issue 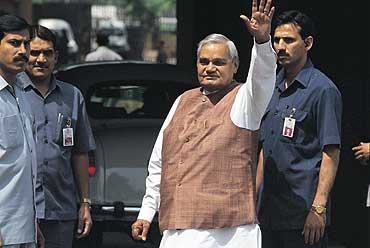 outlookindia.com
-0001-11-30T00:00:00+0553
On the face of it, this is the silly season. As politicians fly abroad or to their constituencies, and Parliament takes a break, there's a political lull every summer. But this year's different. Beneath the surface calm, crucial political moves are being executed, vital postures are being adopted. Especially within the BJP.

With a slew of assembly elections round the corner, leading up to the general elections next year, the ruling party can't afford to go on a summer holiday. More so because things are not exactly going by the book in the four states scheduled for polls later this year.

Much to the BJP's discomfort, the Congress has its nose ahead. The party's high profile women candidates, Uma Bharati in Madhya Pradesh and Vasundhara Raje in Rajasthan, have not really covered themselves with glory. Which is why Sangh parivar strategists emphasise that after the assembly polls, the fight for New Delhi is bound to be starkly different—in content and form.

BJP leaders believe in the general elections their party has an advantage, given the quality of their leadership and its electoral alliances. Party president Venkaiah Naidu told Outlook that as in the polls in 1998 and 1999, the 2004 election campaign too will be centred on Vajpayee's personality. "We will highlight Vajpayeeji ka naam/Vajpayeeji ka kaam (Vajpayee's reputation and his achievements)," says Naidu. After some initial doubts, partymen now admit that Vajpayee's peace initiative with Pakistan has boosted his image and helped him occupy the middle ground in Indian politics.

With Vajpayee leading the way, extreme Hindutva is not on the cards. After the initial high, Narendra Modi has been cut to size by the central leadership. Even so, some deft moves are being made to create the right atmospherics so that the Centre can appease the vhp on the Ram temple issue. Says a highly placed party source: "The temple issue will again pick up before the general elections. The BJP's position will be determined by the desire to please its cadre—the party knows there are no votes in the temple issue."

Clearly, the Hindutva card has failed in the states. The party now has to look for other issues. Naidu rationalises: "Trishul was made into an issue by the Congress, not the BJP. It's the Congress which is raising issues like cow slaughter and trishuls. We want to focus on health, education, electricity and water." Many BJP leaders say in private that the party would have fared better with "conventional" candidates against the Congress chief ministers in Rajasthan and MP, Digvijay Singh and Ashok Gehlot. Says a senior BJP minister: "The two women look weak in comparison. If they win, it will be because of anti-incumbency, not their credibility."

Partymen also admit that the BJP is poorly placed in Chhattisgarh and Delhi. There is a chance in MP as the BJP's vote base has traditionally been only marginally less than that of the Congress. The fear is that the Congress CMs in MP and Chhattisgarh, being "master manipulators" could easily "manage" the situation in the event of a close contest. This is why BJP leaders have been making a lot of noise about strengthening the anti-defection law.

Rajasthan, considered a win-win scenario by the BJP earlier, has turned out to be a real challenge. Gehlot, once described as the weakest of the Congress CMs, may well turn out to be the smartest. Gehlot's 14 per cent reservation for the poor among the forward castes has led to panic reactions in the BJP, which is now frightened of losing its high caste constituency. Though Rajasthan has a history of BJP rule, insiders stress that it tends to sweep either way and Gehlot may just have turned the tide in his favour.

As for reservation, Gehlot may have opened a Pandora's box.This is bound to rewrite the electoral rules in the general elections. Just two days after the Rajasthan CM's announcement, the PM promised to set up a commission to study and recommend reservations for the poor among the forward castes. Naidu admits that reservation will become a "very big issue" in the general elections. "Right from the Jan Sangh days, the BJP has been committed to reservation for forward castes," he says. "The party had even passed a resolution supporting this at a national executive meet in Bhopal in 1985. We are the original champions of this idea." Once again, the BJP is realising that caste is a potent card in India, while Hindutva works only in "special circumstances".

Though the Congress may have stumped the BJP on reservations, party strategists point out that in an era of coalition rule at the Centre, the Congress is yet to articulate a clear policy about alliances. Says a BJP leader: "We have evolved a coalition dharma. In the next election too we will remain committed to the NDA cause. The NDA experiment is vital to all our future plans." Of particular significance, says Naidu, will be the alliance with the bsp. "We have invested a lot in Mayawati and it will work to our advantage in 2004," he says.

Indeed, say insiders, small parties will be dropped in the run up to the polls while other alliances will be forged. The "big card" will be played in Tamil Nadu —the DMK might be ditched for the AIADMK. Either way, the idea is that Vajpayee must lead an alliance of parties representing every part of India. That's the BJP's biggest strength, say its election managers. Unlike the Congress, still hung up on single-party rule, the BJP has learnt the art of sharing power and accommodating regional parties.

That's why BJP leaders argue that even a defeat in the assembly polls will not be a major setback. The Lok Sabha polls will be different in character and quality. Says Naidu, rather bluntly: "In the states we are combating strong Congress CMs. At the Centre, we have Vajpayee. They have Sonia. Where's the contest?"