Round II of the Match-Fixing Bout: Proactive parents vs wary NRI bachelors 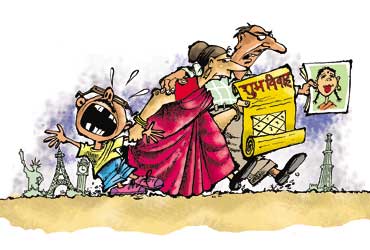 outlookindia.com
-0001-11-30T00:00:00+05:53
Giving into family pressure, Hersh, 30, who did his schooling in Hyderabad and is now a native Californian, agreed to see an Indian woman who claimed to share his love for quirky martial arts movies. The first meeting:

"So martial arts movies are cool?"

With a real fan, says Hersh, the conversation could have gone on for a minimum 15 minutes:

"Word, his next movie is Tom-Yung-Goong. No digital in that one either."

"Oh, for real! I heard Yuen Wo Ping is doing the final fight choreography."

"No way, Wo will never work on a Thai movie."

...There was no second meeting. But the second round in the Match-Fixing Bout between parents and their eligible unmarried nri sons is on here in the US. If the first had parents patiently waiting for their America-settled sons to fly into India for a vacation before they snared him into matrimony, the sequel has them swooping down to the US to yoke their male progeny to wedlock.

For the (rare) uninitiated, Indian men, like women, are subjected to parental pressure to marry because it's the "right age" or before they get "too old". A pressure that doesn't ease just because these Indian Men might have turned Non Resident Indian Men. The conversations pick up speed as they approach 30, the last acceptable frontier to stay single. But like Hersh, there is a new generation of men who are not ready to settle down and have to deal with the same sort of family pressure women go through. The problem is that, unlike women, who have been dealing with this for generations, men are fairly clueless on how to handle it and are running scared. Their arguments range from the fact that their parents are setting them up for the wrong reasons including societal pressure, and a feeling of failing in their parental duties to picking conservative and sheltered girls who have nothing in common with their sons except caste and colour.

Also, doesn't help that their parents have become much more proactive, and are thinking little of landing up in the United States with the biodatas of prospective brides, driven by the fear that their good little boy would end up marrying a "white woman".

On a recent evening, Mahender, a software engineer from Hyderabad currently based in Brooklyn, was making a batch of idlis for dinner while cleaning up his apartment for his parents' upcoming visit. That basically meant getting rid of the alcohol and thinking of strategies to deflect, if not altogether avoid, the inevitable topic of marriage. His main worry was that they might be bringing photos of prospective wives for him even though he has repeatedly told them that he wasn't interested. "But it's the same old routine," he says, adding, "You're 29, this is the right age, you have to get married before you turn too old, what are your plans." Since they will be staying with him, there's no way he can run away from a confrontation.

Analysing the family pressure as he checked on the idlis, Mahender says that it is rooted in the fact that Indian parents tend to realise their dreams through their children. "If you study well, get a good job and then marry by a certain age, then you, and in turn they, are successful," he says. And until his recent digging in of heels, he could have been considered the ideal son since he is an IIT Madras graduate. "But if you stray from this pattern even a bit, it's as if they are failing because they are worried about what their friends and relatives, their peers in society, will say."

Having turned 30 last month, Hersh agrees that society drives pressure. "My mom thinks she's failed me and failed as a parent," he says. He recalls that at a family gathering in Hyderabad, all his aunts were teasing his mother that she wasn't doing a very good job as a mom because her son was still single. "There is this concept that our kids will reflect on us so everything boils down to izzat ka sawal (a matter of honour)," he says.

To make up for it, she tries to set him up whenever she can. He recalls how he recently caved in to the emotional blackmail and met a girl from Hyderabad recommended by his family. "She was laughing at some of the stuff I was saying, but parts of it went over her head. She just didn't get everything I was saying." Like the woman who professed a love for martial arts movies but didn't really know a thing about them.

Maybe Mahender's fears of what may happen during his parents' vacation are not that unfounded. Ask Satees, a 27-year-old software professional from Andhra Pradesh currently based in New York. His parents, on a visit last summer, along with his favourite pickle, brought photos and biodata of girls. The worst was yet to come. During one argument his mother started crying. "I just didn't know what to do," he recalls. "I was totally lost. I looked at my dad for support, but I just couldn't do anything." However, he is very clear that he will not give in even a little bit to pacify his parents.

Another issue that these men have with their family's attempts to match-make is that their parents have no clue about their lifestyles or interests and tend to choose a woman because she comes from the correct caste and background. "I like to go to the beach or go hiking or camping, and that's such an American lifestyle that I don't think that the women my parents are looking at have had an opportunity or exposure to develop those interests," says Satees.

Hersh agrees. "The girls my family tends to suggest look like side actors from old Telugu films, complete with a flower in their hair. They are so frail and that's just not my type." He recently quit his job and spent a year backpacking across Japan, Thailand, Singapore and India, sleeping in hostels and taking the cheapest transportation available, ie, a lot of walking. "I don't know how many of these girls my family is looking at would be into that."

And apart from the conventional expectations, they say that living in America has added another dimension to their checklist—physical compatibility. "But my parents aren't going to go around asking the girl they pick how you're going to be in the sack with my son now, are they?" says Hersh. "And unless I want my family's reputation completely ruined in Hyderabad, I can't tell an aunt who wants to set me up if I can first casually date that girl before I figure out whether I like her or not."

Interestingly, not all their American friends are sympathetic to their pain. "Some of my white friends are envious that I have such a convenient fall-back plan, should my own efforts lead to nothing of consequence," admits Hersh. Satees adds that some of his friends who were on the anti-arranged marriage bandwagon have gone over to the other side and are in fact quite eager to be set up.

Kartik, a Delhiite now working in New York, thinks he has an answer on how to handle his parents. "I'm the one who calls them so I can easily control it," he says. "I'll just call them less frequently." Though 28, he is a newcomer to the under-pressure group. His parents waited for him to finish his PhD before they started the 'now that you are set professionally' conversation. But if he thinks that he's safe because he has gotten away easy so long, he may be in for a rude shock. His father is planning to visit him later this year and this iit graduate admits that he is slightly worried that that trip may intensify the "family pressure". Clearly, the young NRI today is the Nuptially Reluctant Indian.