The new government starts by meeting one of its pre-poll promises. Can it deliver on the rest? More Coverage 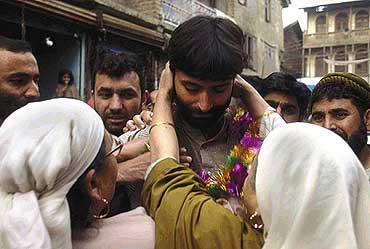 outlookindia.com
-0001-11-30T00:00:00+0553
Closer up, Mufti Mohammed Sayeed has stepped into the shoes of his guru and political mentor, the late CM Gulam Mohammed Sadiq. The Mufti was introduced to state politics by Sadiq in the '60s when he held the reins of the troubled state in the aftermath of the Hazratbal agitation. It was in 1964 that Sadiq had coined his classic political doctrine of the 'healing touch'. Four decades on, Sadiq's protege intends to pay gurudakshina and hopefully realise the agenda set up by his former boss.

Last week, the Mufti took the first step in that direction. In keeping with his pre-poll promise, the new chief minister announced the release of a few political prisoners, some incarcerated without trial for over a decade and others frequent 'guests of the state'. The most prominent among them was Yasin Malik, enfant terrible of Kashmir's azadi brigade and JKLF chairman. And while the cases of the Jamaat-e-Islami's Syed Ali Shah Geelani and Sheikh Abdul Aziz of the People's League were kept pending, those who tasted freedom included several others held as hardcore terrorists during the decade-long separatist violence. Almost as if to herald this policy of leniency, on the eve of the Mufti's swearing-in itself, a Srinagar court had let off JKLF leader Showkat Bakshi, the main accused in the kidnapping of his daughter Rubaiyya in December 1989.

Also on the list of those released—via instruments like parole, as in Malik's case—were former JKLF commander Nazir Ahmed Sheikh and top Hizbul terrorist Mohammed Ayub Dar. On November 14, four more were freed: Bashir Ahmed Bhat of the JKLF, Sheikh Abdul Rashid and Pervaiz Ahmed Dar of the Hurriyat and Abdul Rahim Wani, a district president of the Mufti's own People's Democratic Party (PDP). It would appear that this list will be fairly long by the time the "healing touch" exercise is complete.

Of course, as the chief minister realises, 2002 is not the '60s. Sadiq was dealing with politicians and not with separatist gunmen-cum-politicians or politicians-cum-separatist gunmen. Often, the distinction is difficult to make. Malik, minutes after being released unconditionally, launched a frontal attack against the CM: "I dare him to contest free and fair elections. Let there be elections under an independent commission, not the Indian Election Commission." He went a step further. Malik said the Mufti's PDP had the blessings of separatists since while other political rallies—mainly the NC's—had been attacked, the Mufti's rallies had been left untouched. "I hope he has informed (PM Atal Behari) Vajpayee about his separatist links," Malik added maliciously. In the process, he revealed—like many other separatist leaders in the Valley—that the Pakistani line had to be toed at some point or the other.

Clearly, in a situation like this, no healing touch is possible unless the Centre cooperates. While that largely appeared to be happening, there were discordant voices from within the government. Union home minister L.K. Advani said a duly empowered committee should screen the cases before the detainees are released and that the Centre and the state should cooperate in the fight against terrorism. "No decision should be taken that weakens the country and the resolve to fight terrorism," he said.

Defence minister George Fernandes held a contrary view. "What's in the state government's power to do, they will continue to do. There is nothing wrong in that," he said in Bangalore. Fernandes held that the new j&k government had during the election campaign made commitments which they were merely carrying out. Asked if there was a divergence of views in the government on the decision to release extremists, BJP spokesman V.K. Malhotra said, "Well this is the NDA situation. All NDA partners need not agree on everything.The BJP view is that there should be a committee to oversee the release, while the Samata Party holds another view."

The question, then, is how much divergence is right for Kashmir's healing touch. Union home ministry officials who briefed Outlook say there are various categories of those arrested under the Public Safety Act. "The first are Pakistani nationals who obviously cannot be released. Then there are those cases where chargesheets have been filed, where the government can take a lenient view. The third category is of those who have been arrested without investigation. Most releases could well fall under this third category," says an official. In any case, he says, since law and order is a state subject, and POTA is not to be applied in the state, the Centre may not have too much of a role to play except an advisory one, at best.

Home ministry officials have also been at pains to explain Advani's position. According to them, all that Advani is saying is that people who are being released should be thoroughly examined and that the home minister was at nno point against the release of detainees, per se. This thesis may be put to test once the release of prisoners gathers some more momentum.

There could be other effects as well. The RSS—whose front was humbled badly in the Jammu assembly segments they were claiming as their very own—accuses the Congress of going soft on terrorism. Congress leaders deny that and are wary of being called 'soft', in view of the impending polls in Gujarat in December where the BJP is going to campaign on a strong anti-terrorist agenda. The BJP, on the other hand, cannot be seen to be diluting that agenda in Kashmir.

The even more contentious issue at stake will be the Mufti's pre-poll promise of disbanding the Special Operations Group (SOG), the dreaded anti-terrorist strike force culled from the state police force. Now that he is CM, the Mufti's advisors and the Centre have told him that it would have to "be a carefully considered political decision because terrorism is not yet dead in the state". The chief minister has toned down the rhetoric a bit: he now says that the force will be merged into its parent body, the state police. There is also great resistance from the security and intelligence community, which feels that disbanding the SOG would give the militants the upper hand.

Says Kulbir Krishna, who is with the idsa, "It is no secret that the SOG has killed or captured more militants than the army, intelligence, the paramilitary forces and the state police all put together. Their sources of intelligence are top-notch, they being local people, their arms and motivation is amongst the best and the SOG will be very difficult to replace." What has gone against the SOG are some of their questionable tactics used in pursuance of their aims—something that the Mufti capitalised on during his election campaign.

The mood in the Valley is clearly upbeat. To an average Kashmiri, the release of prisoners comes even as there is better availability of electricity during the holy month of Ramzan. As against the previous government's non-negotiable daily power cut of 14 hours, the new chief minister has reduced the daily curtailment to an hour-and-a-half. Prisoners are joining their families at a time when the new government has promised compensation of ex-gratia to even those killed by security forces. Until now, compensation was only given to victims of terrorist violence or those killed in cross-firing between terrorists and security forces.

Significantly, the Mufti's victory in tandem with the Congress seriously threatens to erode the Hurriyat's credibility, with its leaders making one outrageous claim after another. Mirwaiz Umer Farooq, who heads the Awami Action Committee, attributed the release of prisoners to international pressure.There is a growing opinion in Kashmir that the Hurriyat has to deliver now by galvanising locals instead of giving speeches from the safety and comfort of their well-appointed drawing rooms. If not, the new combination of the PDP-Congress could well leave them without jobs or a political future—and privately, they are quite inclined to agree.

Says cabinet minister Ghulam Hasan Mir, "This is an exercise by the separatists not to give credit to the Mufti for such bold initiatives. Where was that pressure during the previous state governments when dozens were being added to those already imprisoned? Why was the SOG not asked to suspend its activities until we came? Why was no attempt made to stop using POTA before we appeared on the scene? We have taken it upon ourselves to dress up the festering wounds of the people."

Mir, of course, is not unaware of the inherent perils of following such a lofty agenda. The pitfalls of alliance politics are as tricky as the explosives that separatists have triggered throughout the state. Mir says that while the problems are for everyone to see, there is no reason why a fresh effort should not be made. Indeed, why not?

By Zafar Meraj In Srinagar and Ranjit Bhushan

"If I Am Prima Facie Satisfied, I Will Request The Judge To Resign"