Cheated on promises of equity for decades, Telangana’s right to statehood is validated by scholars and activists 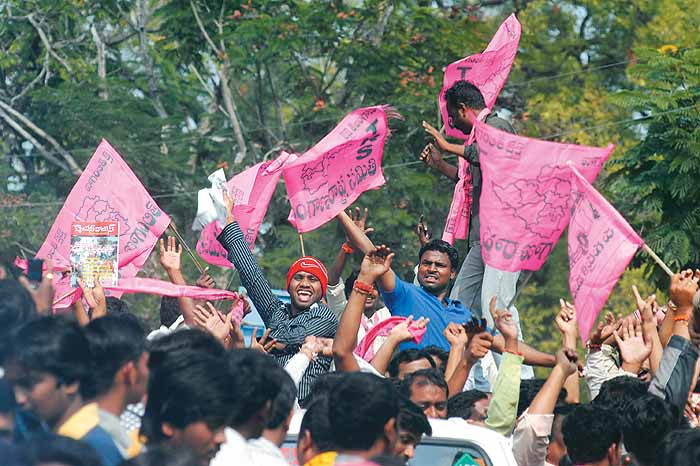 Telangana today evokes images of gun-toting khaki-clad Naxalites and students immolating themselves—both conjuring horror and violence. In contrast, the Telangana movement for a separate state is both a peaceful movement and a movement for peace, an anomaly in a region marked by continuing violent struggles. By and large, the separatists have been peaceful, resorting to fasts, dharnas and processions. Telangana, which has seen decades of violence—from the Communist-led armed struggle of the forties to Naxalite violence the seventies onwards, and the horrific police repression of both—yearns for peace. The call for a separate Telangana is also a call for development on its own terms, to enable vertical contradictions within the area to be resolved within it.

The Telangana slogan is a six-decade-old one. In 1952, the Hyderabad Legislative Assembly voted to keep the Hyderabad state intact and separate. The States Reorganisation Commission, appointed by the Nehru government, also cautioned against forced unification in 1955. The gentlemen’s agreement in 1956 (between Telangana and Andhra leaders) stated that the utilisation of Telangana’s huge surpluses should be within the area of Telangana. This was not done. Data from 1966-67 shows 88.4 per cent of government canals were in the Andhra region, and only 1.4 per cent in Telangana. Subsequent developments confirmed the fears of the people of Telangana. Telangana has failed to get an equitable share of public investments, there is discrimination against its people both in public education and employment, and a clear denial of political power to leaders of this region. Two major rivers pass through Telangana—the Krishna and the Godavari; neither irrigates the area substantially. Instead, their waters go to the coastal Andhra districts of Krishna, Guntur, East and West Godavari.

One could ask what is new about inequitable distribution—it’s seen across the country—in Vidarbha, Kutch, Banda or Azamgarh. What is new is that the Telangana leadership has come of age in all spheres—in independent political leadership (as in the TRS), in business and enterprise, in academics, in running newspapers and magazines, and especially in culture. Over the last decade, Telangana districts have been topping school-leaving exams, and have provided the largest chunk of passport-seekers. Quite naturally, the new leadership cannot afford to put up with second class status, in terms of public investments, jobs and education; it can even less tolerate the marginalisation of its culture—its dialect, songs, food and customs, and see the culture of the four coastal districts hold precedence. Telangana youth have imposed a ban on shooting of films by coastal Andhra film-makers in their areas, and are working against the release of new films under coastal Andhra banners in Telangana.

Though the separatist movement is more than half a century old, it has seen a hostile media, led by Andhra-controlled conglomerates, and mainstream literature has not even looked at it. In this context, the two books, the one by C.H. Hanumantha Rao, a respected economist from the region, and the other edited by activists, is more than welcome.

Rao’s book is a reasoned argument for the viability of smaller states, and persuasively lays out the case for them, whether it is Jharkhand, Uttarakhand and Chhattisgarh, and shows that growth in GSDP has been better there than when they were united. Working from the premise that regional disparities exist across India and poverty alleviation programmes have been unable to solve horizontal equity issues, Rao argues for smaller states for better governance. The second book lays out in detail the history of the issue and the current conflicts. Bharat Bhushan sees the gadi (the castle of the Telangana zamindar) as a metaphor for oppression and injustice and as containing the key to unravelling the systemic legitimisation of exploitation. It is an irony that the excellent overview by Duncan and Forrester is four decades old and still relevant. Both books required better editing and presentation.