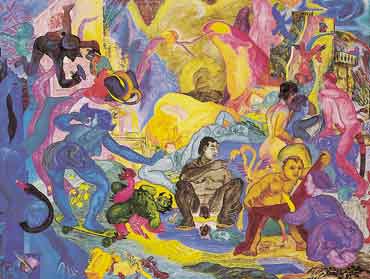 outlookindia.com
-0001-11-30T00:00:00+0553
Primly demure, she leans back on the sofa, lost in thought, while the lights in the South Delhi living room flicker—it is a bad electricity day—and the candles make her sari in various shades of white appear all the more elegant, stately. Conversation turns to what is exciting on the art scene: this is a small crowd of art aficionados, and the petite lady is an art connoisseur of no mean sensibility. Suddenly, she lurches forward, clutching the edge of the sofa, eyes aglow, and blurts out rather loudly: "When I saw Brootaji's show I was sexually aroused." Having said this, she relapses into her original pose amidst twitters and raised eyebrows. Conversation stops—until painter Rameshwar Broota, sitting at the other end of the room, says sotto voce: "She is right, it is there in my paintings, the sexual energy, it is about male sexuality."