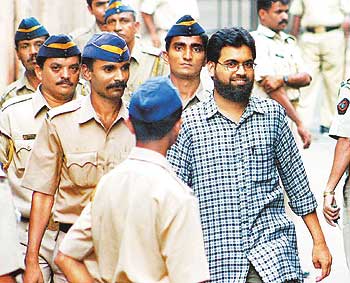 This hasn’t been a good week for the Mumbai police. Close on the heels of the special POTA court acquitting all eight accused in the December ’02 Ghatkopar blast case, the sessions court acquitted 24 men of rioting, murder and arson in the post-Babri demolition riots after December 6, ’92. The reasons were the same: lack of evidence, absence of credible witnesses. So what does the POTA court judgement mean? The Crime Branch team that probed the Ghatkopar case (and several others after that) believed that confessional statements of some of the accused, discovery of an Al-Qaeda manual and CDs, and key witness accounts would see the accused in the dock.

But it was naive to assume that key witnesses would not turn hostile—in this case, the bus conductor did, so did the three doctors from JJ Hospital who had told the police that they had seen the co-accused in prime suspect Dr Abdul Mateen’s room, the hotel cashier who earlier stated that the accused met quite often at his hotel to discuss avenging the Gujarat carnage, the cybercafe owner from where some of the accused had allegedly sent mail to Saudi Arabia and to mastermind Abu Hamza. Not only were some of the confessions retracted, others weren’t even corroborated by material evidence. Which led POTA court judge Justice A.P. Bhangale to suspect "the genuineness of the confessions" in the "weak" case. The prosecution may appeal but the import of the judgement is not lost on the accused in the other blast trials. There is nothing to suggest the police have done a more thorough investigation into similar blasts at Mumbai Central (December 6, ’02), Vile Parle (January 27, ’03), Mulund (March 13, ’03), Ghatkopar (July 28, ’03), Zaveri Bazar and Gateway of India (August 25, ’03). Three of those acquitted are also accused in these cases. Ironically, most of the cops involved in the probe are themselves in the dock for their involvement in the Telgi scam and the custodial death of Khwaja Yunus, a prime accused in the Ghatkopar blast case.

Sky Is The Limit