No visas for Pakistanis as the 'hawala kingdom' cleanses itself 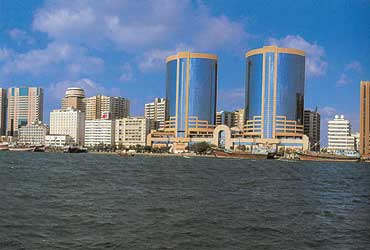 outlookindia.com
-0001-11-30T00:00:00+0553
When Atif Jawad arrived in the bustling emirate of Dubai, one of the seven sheikhdoms which constitute the United Arab Emirates (UAE), he was all set to join an elite group of Pakistani bankers, respected for their business acumen and their ability to straddle two contrary worlds—the Islamic and the western. Headhunted by the head honcho of Emirates Bank International, Dubai's leading bank, Jawad wanted to knock on other doors before taking up the new assignment.

But then September 11 happened, precisely at the time Jawad was mulling over two lucrative offers. When he applied to renew his visit visa—automatically renewed for a fee every month for a period of three months in all—Dubai's immigration authorities turned it down. No explanation was given.

Jawad is among the hundreds of Pakistanis whom the UAE stopped issuing visit visas within a fortnight of September 11. Jawad had to promptly leave Dubai; hundreds of Pakistanis couldn't even enter the UAE. Admitting the ban was in place, the powerful defence minister, Sheikh Mohammed bin Rashid al Maktoum, had said: "We're screening all applications from Pakistan for now, but it's only temporary."

But five months later, the ban on Pakistanis without valid residence visas remains, testifying to the strain in the hitherto cosy Pak-UAE relationship. Wary of Uncle Sam's eagle eye and keen to insulate the UAE from the ramifications of the war on terror, officials here have begun to diligently take to vacuum-cleaning the country, long considered to be the veritable dynamo of the infamous hawala racket.

The trigger was simple: the trail to Al Qaeda's funding led to Pakistan and the UAE. In mid-2001, an Al Qaeda operative had wired $75,000 to Mohammed Atta, considered the kingpin of those who hijacked four aeroplanes on September 11, from a little-known branch of the UAE Exchange Centre, which Indian businessman B.R. Shetty has been running for more than 20 years. (Shetty has subsequently been cleared of any involvement.) A few days before the WTC and Pentagon attacks, the Al Qaeda hijack team wired back the money they were left with to the Dubai operative. Authorities believe he flew in from Pakistan, collected the money and melted back into the bylanes of Karachi. Similarly, last year alone, authorities believe, Al Qaeda may have also received close to a million dollars through the various Islamic charities and foundations that operate out of the UAE.

Most of the UAE charities have now been persuaded to send their funds to a pool managed by the rulers of the sheikhdoms. More action followed. By mid-January, 13 accounts were frozen in various banks in the UAE, one exchange house was ordered closed and the UAE Central Bank had issued a new anti-money laundering law.

The law adheres strictly to the criteria set down by the US Financial Action Task Force (FATF). In fact, Central Bank sources admit that the US officials drafted the document which prescribes harsh punishment, including imprisonment for seven years and fines of Dhs 300,000 and over. Says UAE Central Bank governor Sultan bin Nasser Al Suwaidi: "Banks have to note the details of the transferring party and the receiving party if the amount exceeds Dhs 40,000." Besides, visitors to the UAE are now required to declare cash and travellers' cheques exceeding Dhs 40,000 on arrival. Money exchange houses have to record details of transactions over Dhs 2,000. These radical measures are expected to root out the irregularities that riddle the UAE's much-vaunted free trade and open banking systems.

There are reports that the US is probing the method of transferring money through hawala, often used by expatriates from the subcontinent to remit money home. For instance, it has been estimated that out of the $10 million remitted to Pakistan annually, only 10 per cent is routed through official channels.It's believed hawala was used to fund terrorists in Afghanistan and Pakistan. But officials admit that it's difficult to curb such transactions. Says an official: "There are too many small operators and their modus operandi is very discreet."

There's no denying, though, that under the new circumstances where the authorities are looking askance at anything remotely connected to terrorism, the UAE may no longer remain the magnet that attracts the mafiosi. That's good news for India.