US business may eye Gujarat covetously, but the stigma stays 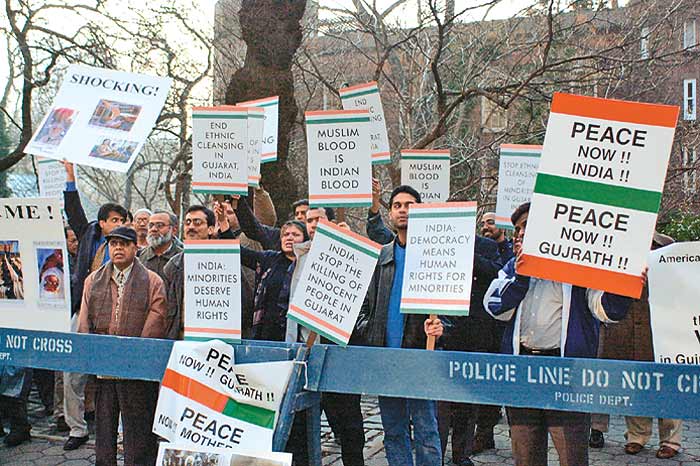 Gujarat chief minister Narendra Modi holds a dubious distinction, which is barely remembered now in the clamour around his supposed projection as a candidate for the post of prime minister in 2014. It was against Modi that the US administration, under then president George W. Bush, invoked for the first time a provision of the International Religious Freedom Act, 1998, that bars admission into the country of any person who as a foreign government official was “responsible for or directly carried out...particularly severe violations of religious freedom”. Modi was conseqently denied a visa in 2005; no other person has been felled by this provision since then.

Washington’s decision was in part precipitated by a letter in which nearly two dozen lawmakers urged then secretary of state Condoleezza Rice to deny Modi a visa, citing “numerous reports” of his involvement in “horrific human rights violations in India” to justify the demand. The lead writer of the letter was Joseph Pitts, a Republican member of the US House of Representatives, who sees no reason to reconsider his position six years later. As Pitts told Outlook, “Until something changes, I don’t think the position of our country should change.” He vividly recalls seeing the blood stains in Ehsan Jafri’s home, where the former MP was lynched, on his travel to Gujarat after the 2002 violence. Pitts says, “I’m still concerned that...Modi and his cohorts have not been held to account for their actions.”

Pitts’s view should temper the spirit of those in the BJP who have selectively quoted from the September 1 report of the Congressional Research Service (CRS) to trumpet “impressive development successes” under Modi and claim that America perceives him as a likely prime ministerial candidate in 2014. These friends of Modi, quite conveniently, gloss over that part of the CRS report which says he remains “dogged by controversy over his alleged complicity” in the riots.

That may be conveniently selective citation. But it doesn’t dissuade David Ludden, author of Making India Hindu, from perceiving a political agenda behind the report, which he believes pays disproportionate attention to Modi and Gujarat. As Ludden told Outlook, “The BJP in India and Republicans in the US have a lot in common and will strive to make Modi ‘more acceptable in the US’. The CRS report seems designed to work in that direction.” Agrees Kamala Visweswaran of the University of Texas, Austin, “The CRS report ignores the fact that there are two major ongoing riot cases which name Modi as a defendant—a civil suit filed by British NRIs in Himmatnagar in 2004, and the Ehsan Jafri criminal case.” In contrast, contends Visweswaran, the CRS overplays Modi’s economic achievements without furnishing much by way of concrete evidence.

New York University professor Arjun Appadurai feels the US business community, spurred by a deep recession at home, has been wooing Modi with an eye on lucrative business deals in Gujarat. This courtship is dangerous, declares Appadurai, adding that the stain of the 2002 riots has anyway been blurred as a consequence of “a steady double-effort by Modi’s supporters to whitewash his role in 2002 and to promote his dubious accomplishments in regard to equitable development in Gujarat”. This behaviour of the American business community is downright hypocritical, suggests Ludden. “As horrific events move into the past, their significance becomes more malleable: 9/11 is kept alive in the American memory, while the Gujarat killings are allowed to fade away. If the US can shun, arrest, and even kill murderous politicos in various parts of the world, it should certainly shun Modi,” he says.

However, Outlook’s interview (see main story) with K. Alan Kronstadt, who coordinated the controversial CRS report, testifies to his deep dismay over the manner in which the BJP has quoted from it. What the Indian media seems to have forgotten, as have BJP leaders, is that the CRS’s comments can’t be taken as the US government’s. The CRS, for one, provides only policy and legal analysis to the US Congress; it doesn’t even make recommendations to the US administration. In fact, a state department report on religious freedom released earlier this month notes the “continued concern” over the Modi government’s failure to arrest those responsible for the 2002 riots. This sentiment is echoed by Pitts, who told Outlook, “(The possibility of) having Modi on the national stage doesn’t bode well for communal harmony in India, in fact it could lead to further communal violence.”

Yet, in America, as is true of India, Modi and his politics polarise people. “The fact that he was denied a US visa infuriated many in the Indian American community,” says Walter Andersen, whose book The Brotherhood in Saffron deals with the RSS and Hindu revivalism. He adds, “Modi has aroused a kind of Gujarati nationalism.” This observation is particularly true of Gujarati Americans—many of their events have Modi participating via videoconference and a chair is often left vacant in his honour. But Visweswaran throws in a caveat, “Among secular professionals, there is no love of Modi.”

This polarising impact of Modi makes analysts wonder whether the BJP would ultimately project Modi as its candidate for the top job. “The BJP strategists are not so foolish as to be taken in by a US report,” quips Andersen. He recalls a conversation he had last year with L.K. Advani, in which the BJP stalwart pointedly left out Modi’s name from their discussion on prime ministerial candidates.

Modi’s sadbhavana fast doesn’t seem to have impressed many here. Among them is Felice Gaer, a member of the US Commission on International Religious Freedom (USCIRF), one of those groups that vociferously opposed a US visa for Modi. Gaer acknowledges that there is a “significant stigma associated with (Modi’s) actions before and during the Gujarat riots”. Can he shed this stigma? Not likely, but not impossible, says Gaer, who said she wasn’t speaking on behalf of USCIRF. “It won’t be easy, but it could, under circumstances, end up that he credibly helps set the record straight, promote truth-telling and bring perpetrators to justice and establish measures to prevent a recurrence. But these are not criteria one expects to see, based on evidence currently in the public sphere.” Indeed, it requires more than a vague three-day fast for peace and brotherhood, one that doesn’t look the most important issue in the eye, for Modi to convince people about his repentance.