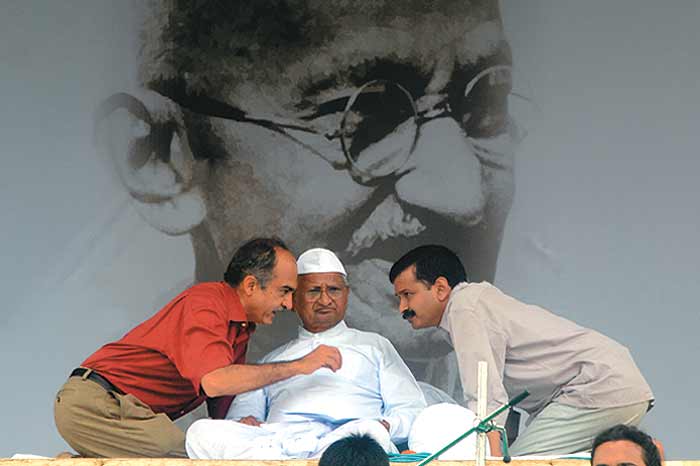 It is late Thursday afternoon, pregnant with possibilities, as I try and make sense which way the wind is blowing. Are we on the cusp of a violent storm or a cool breeze? I am neither brave nor foolish enough to make predictions.

No publication has supported or celebrated NGO power more than Outlook. Derisively, our critics call us the jholawala magazine. It is a jhola we wear proudly. Therefore, it pains me to see the divide and the acrimony in the NGO community. I am an admirer and friend of Arvind Kejriwal/Prashant Bhushan. I am also an admirer and friend of Aruna Roy/Nikhil Dey. These two groups bring great lustre and enormous respect to our civil society. Together and separately they have fought for the Lokpal bill with singular distinction. They stand on the verge of a grand victory. Victory for the people and victory against the much-hated system. To throw it away after all the hard work has been done would be a national tragedy.

Why can’t Aruna Roy and Prashant Bhushan sit across a table and hammer out a single draft of their respective bills? These versions have so much in common that a consensus could be reached in a couple of hours. I urge both sides to take the first step for arriving at a joint bill.

Is it too much to ask for an empowered Lokpal, created and mandated by our elected legislators?

Now that our political class has been shamed and shown up, they can see the writing on the wall. The time for denial is over. For all their infirmities, the eyesight of our netas when it comes to self-preservation is perfect. Besides, the Constitution and its creature, Parliament, belong as much to “them” as “us”. It is the people’s Constitution and the people’s Parliament, even though it is occasionally occupied by rogues. Passing an effective Lokpal bill does not mean undermining Parliament and its processes. Is the citizen asking for too much when he wants an empowered Lokpal, created and mandated by the country’s elected representatives? In the last few days, implicit in all the debates witnessed is a suggestion that a strong ombudsman and a strong Parliament are incompatible. That is a dangerous trap to fall into. Can’t the citizen have both, rather than only one? Why not go for the win-win solution?

Compromise is a dirty word in our lexicon currently. One could argue that the mess we find ourselves in is because, in the past, compromise has been the rule rather than the exception. Happily, what is being sought here is not the c-word. The final civil society bill will be strengthened if it passes through parliamentary scrutiny. The Anna Hazare team is, rightfully, suspicious of “procedures” as another name for delaying tactics. I see no reason why the final bill, after being debated by the standing committee and Parliament, cannot be passed in four weeks.

The last fortnight has been nerve-wracking for the country. We have come close to anarchy in our search for a “second independence”. The danger is not yet over. However, we have an opportunity to deepen and enrich our democracy through genuine people’s participation as a continuous process instead of a once-in-five-years exercise. Seize the moment.