A patchwork history of photography in India, a tribute to the image 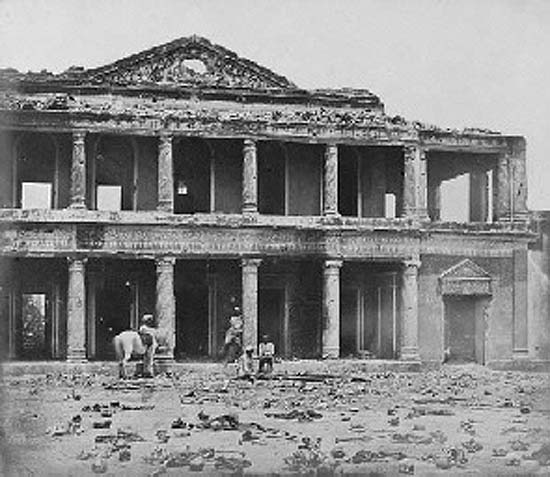 As with the telegraph, railways and electricity, photographs changed life in the nineteenth century. The invention of the Daguerreotype in 1839, followed by the Calotype (based on paper negatives) and the easily reproducible glass-plate negative made possible the transition from the visual representation of reality (as in paintings) to, as John Berger poin­ted out, the ‘quoting’ from it. Malavika Karlekar in Visual Histories focuses, through 32 short essays, on this transformation of visual culture in colonial India: “the camera, its initial locale, the studio...photographers and the growing number of clients”.

Almost from its infancy, the British embraced photography as an important tool to bring order to the overwhelming preponderance of ‘new’ knowledge that India commenced to offer. An early drive commenced when the first Viceroy, Lord Canning, ordered ‘photographic likenesses’ of the ‘remarkable tribes’ of India in 1861, ultimately resulting in the People of India series (1868-72). A vigorous cataloguing of the country’s architectural curiosities, archaeological relics and landscape accompanied this visual archive of ‘native races’. Though much of the work was done by the photography departments of the three presidencies (set up in the 1860s), Capt Linnaeus Tripe’s work in south India and the great Samuel Bourne’s exe­rtions in the Himalayas are remarkable. Another early pioneer was Rajendralal Mitra, the premier Indological authority of the day, known for his pathbreaking work on Bodh Gaya. It’s significant that such work ran parallel to the development of new areas of study such as choreography and anthropology.

Photography had its military, administrative and punitive uses too. The discovery of fingerprinting and its photography led to the classification of thousands of criminals. As William Baker and John Burke were wielding the camera in service of the Great Game, there broke the one event that drove a cleave through Bri­tish-Indian relations—1857. On hand was Felice Beato, veteran photographer of Balaclava and Sebastopol (Crimean War) and latterly of the Second Opium War, with his spine-chilling enactments of massacres, victories, sacrifices, and the noble brutality of the army of retribution. The most famous of all is the photo of Lucknow’s ruined Secunderabagh, with its grisly foreground of human remains. Staged for maximum cautionary effect on future mutineers—a warning shot of the type that remained curiously popular with colonials for decades.

A visit to the photo studio is still within living memory. The urban Indian middle class started frequenting studios from the late 1850s, and those of famous firms as Bourne & Shepherd, Johnston & Hoffman, S.C. Sen or the lavish establishm­ents of the stupendously successful Raja Deen Dayal came to be sites where a particular colonial encounter was memorialised through the prism of imitation, make-believe, elaborate preparation, theatrical props and a sharing of common space by the ‘master’ and ‘subject’ races—something denied in the real-life public sphere. The formalised set of customs in the studio and the sli­ghtly mannerist images they yiel­ded are close to Karlekar’s heart, and she subjects some of the cartes-de-visites and cabinet-size photographs to close analysis. Karlekar shows how the gradually evo­lving customs of the medium often shadowed, or ran parallel to, changing socio-political reality—urban profes­si­ons and emergence of the nuclear family (partially reflected by the growing, confident appearance of women beside the men)—and ushered in different forms of modernity. A few photographs are used to provide biographical sketc­hes—of danseuse Rukmini Devi Arundale, social reformer Sister Subbalakshmi, and educationist Sarah Massey.

The true democratisation of the photograph occurred in the 1890s and early 1900s, when film-based negatives, and later the Kodak Brownie, made it cheap and accessible. The era had its distinguished practitioners too—early women pioneers Sarojini Ghosh and Annapurna Dutta, Maharaja Birchandra of Tripura, and the artful domestic portraitist, Umrao Singh Sher-Gil. A rapidly modernising India was also well-served by the Swiss Raymond Burnier (temple architecture and sculpture) and Alain Danielou (social commentary). Karlekar closes her book with essays on the three titans who chronicled the bloody end of empire in India—Homai Vyarawalla, Sunil Janah and Margaret Bourke-White.

Karlekar often bolsters and illustrates her points by citing scholarship from around the world, and her short, lucid essays magnify the particular and take in the general view with equal ease. Though it’s not a straight narrative, a patchwork history of photography in India does emerge. Finally, this is a tribute to the image, taken by a man under a shroud, caught in the frozen instant of the blanching flare of the flash, and pored over for a lifetime by lamplight.