Seduce By High Dudgeon, As The Silent Bits Speak

Media grab by big business, past scandals, sudden layoffs, rule of the snippet stifle the industry. Gossip or journalists’ paranoia, news has been broken. 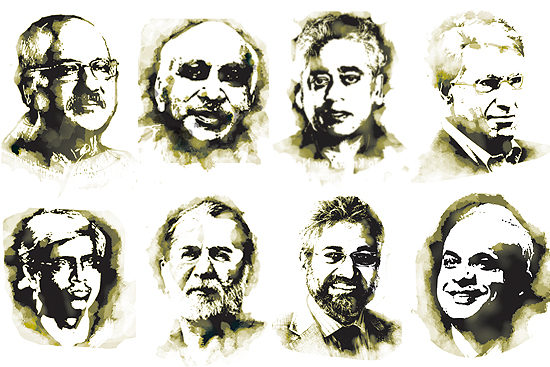 News will become more entertaining and less scathing; its aura of information could overshadow probing investigations. It may hurt people in power but not damage them for life. ‘Out-of-media settlements’ will trend on Twitter. Journalists will remain free (even as social media forgets the difference between freedom and fact) but increasingly vulnerable to subversion. We will reflexively learn to look over our shoulders, bite our lips and edit damning lines before they get us summoned to the editor’s cabin. Employment letters will become smarter contracts convincing us to loan our skills as ‘consultants’, another word for potted plants on media windowsills. Our illusion that not writing on coal will keep us out of trouble will be shattered as glycerine soaps could get included in the list of ‘let’s leave it’ stories. Consumers may need readership diets to escape the gluttony of empty-calorie ‘exclusives’ and breaking news will become another word for daybreak and nightfall.

This first draft of lament is hardly without reason. There is a growing cynicism about journalism as a watchdog, based on assumptions that most ‘med­iawallas’ are recruited by the propaganda mafia of big business. Advertisers dictate to or desert us while politicians bluster us. Former Union home minister Sushilkumar Shinde wanted to ‘crush electronic media’; aap chief Arvind Kejriwal wanted to ‘put the media in jail’, while former Union information & broadcasting minister Manish Tewari asked: “Do we have the freedom of the press or the freedom of the owner of the press?”

Then there are revelatory stories on paid news, dragging baggage from the Radia tapes or professional violations by Sudipta Sen (now in jail) of Calcutta’s Saradha ‘chit fund’ group that owned the Bengal Post. There are also the actuals. The fading away of long-form writing in most publications for ‘snippety’ tidbits; a tut-tutting tabloid interest in political scandals without persistent follow-ups to uncover hidden truths; lingering doubts that the media may have to mind its reach and tenor under the new government and an increasingly aggressive PR industry that supplies story ideas and tows us out in air-conditioned cabs for ‘interviews’ before returning us to our fates, goodie bags in hand.

The hiccups of last year’s layoffs continue. More than one hundred people were put out by the Outlook Group, which suspended editorial operations of Geo, Marie Claire and People magazines. And more than 300 were retrenched by Network 18, which included those in CNBC-TV18, the IBN channels, Forbes India magazine, the Firstpost website and other channels and outlets across television, print and the internet. In both cases, employees were shown the door without prior notice. To top all that, Messrs Ambani and Co control more than 50 news channels, besides enormous stakes from toothpaste to sunscreen lotions and fashion footwear, multigrain atta to petrol, power and hospitals, that leave us with few soft or hard issues to dig out like good watchdogs without barking at the master.

Admittedly, the above dossier of lament is yet to become a clear narrative even if the concerns are valid. The anxiety about media freedom getting compromised in the Modi era stands largely unsubstantiated so far. As a disclaimer, I write for Mint, which encourages long-style magazine writing and does so without any editorial hectoring or jabbing.

There’s growing cynicism, based on assumptions that journalists are recruited by the propaganda mafia of big business.

More than a decade back, as a junior journalist (when journalism was relatively a freer beast), a story of mine on the ‘Downfall of Doordarshan’ was spiked. And once in 2010, an article on Nita Ambani was withdrawn within a day of a magazine commissioning it. No reasons were cited. I wondered why, because writing about Ambani’s arrival on the IPL scene as a team-owner was intended to be more about her fine wardrobe and appearance, not some tedious ho hum. Barring that, the editors I have worked under, inc­luding exemplary ones like M.J. Akbar, Aroon Purie, Vinod Mehta and Shekhar Gupta, never asked me to whiten my stories even when they were about sunscreens.

At the same time, consider the panoply of shifts among journalists, some completely out of their constellations (see graphic). More than a couple of agenda-setting editors and TV anchors have changed organisations, thus rewriting loyalties and inciting curiosity about their political stance. One is accused of rape, a few have parked themselves as fierce, if unemployed opinion-makers, even as a few quit journalism to join political parties.

Expecting changes in the posturing, pinning and pin-­tucking of news is the logical postscript of these career shifts. More so if we look at the rewired matrix of editors after breaking down news into its elements—the day’s top stories, the style, agenda and voice of the paper or channel, its political convictions, commitment (to readers, not advertisers), the money spent on in-depth investigative reportage, recruiting journalists who can report assiduously and write engagingly, selection of opinion writers or studio guests for debate, the ratio between reported stories and opinion. And the ‘face’ of a news channel in the form of a ranting star anchor.

The new jobs of New Delhi editors may not influence how the Malayala Manorama group handles news in the South or how the regional press elsewhere positions its headlines, but they could drive high-octane echoes in the corridors of political power and reset the tone of metropolitan conversations. Some agree. “News was a product for Raghav Bahl (the former controlling shareholder and managing director of Network 18), but barring CNN-IBN, the channels were never agenda-setters where news was concerned. With a high-profile opinionated chief, they might rake on,” says a media analyst on condition of anonymity, adding that it is at India Today where a turnaround in selection, expression and editorial handling of news is expected.

“I think there will be some kind of shift but it is important to ask if it is just about ownership issues and the practice of journalism or recognise that the very demand for news is different today,” says Sevanti Ninan, founding editor of media website The Hoot, who writes a media column for Mint. Ninan’s sense of the changing demand for news is based on her conversations with anchors/ editors who say they do as much reporting as before but run the stories through the day rather than at night. “Advertisers think discussions sell more on prime time,” says Ninan. “People want Arnab Goswami to entertain them.”

How the changing chairs of editors, business houses own­ing media companies and a media-wary government pans out is yet to be seen. And to prevent righteous indignation from becoming a silly, self-serving tool, it may be important to ask and answer why Reliance wants to control news organisations. Till then, we could dwell on Soviet dissident Yevgeni Yevtushenko’s words aptly quoted by John Pilger in Tell Me No Lies: Investigative Journalism and its Triumphs: “When truth is replaced by silence, the silence is a lie.”

When The Drill Seeps Water