Did the anti-communal campaign, going for an overkill, push voters right into Modi's arms? 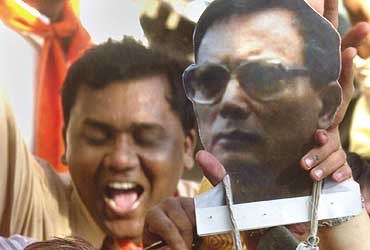 outlookindia.com
-0001-11-30T00:00:00+0553
"Everyone is blaming Gujaratis. Are we that bad? The electorate must give a befitting reply to these outsiders who are desecrating our holy land. Drive them out."
—Narendra Modi in Ahmedabad during the poll campaign

Secularism vs regional chauvinism? The Gujarat election results proved a telling example of how the anti-Narendra Modi lobby headed by an aggressive media campaign played into the BJP hands—hook, line and sinker. So, while the so-called secularists, assorted anti-communal ngos and peace activists raised the pitch, protesting rightfully against the communal carnage that followed Godhra, the Congress had to take the brunt of a two-sided campaign—caught between a perceived soft Hindutva line and the aggression of the secularists. It ultimately slumped ignominiously between these two contradictory stools.

In a BJP campaign which lasted several months—as opposed to the hurriedly patched up one of the Congress—Modi tried one trick he knew was bound to deliver bountifully, perhaps even better than Hindutva. And he was right. In one election meet after another, Modi's pet theme was Gujarat's plight at the hands of 'outsiders', a euphemism for all those opposing him. "These secularists have blamed Gujaratis for the riots not just in India but abroad. You decide whether it's correct," the Gujarat CM thundered. Says Praveen Togadia, VHP mascot and Modi's unofficial running mate: "Thanks to the secularists, the BJP won the polls. The choice was between Hindutva or Gujarat's asmita and secularism. The people decided."

The issue raises important questions. Was there a secular overkill evoking the maximum publicity, which in the end Modi—pretty much a hate figure by then—turned to his advantage? Says Ahmedabad-based activist Prakash Shah: "It was systematically propagated that though only one per cent of Gujaratis were involved in the riots, the entire community was being demonised. No one had actually demonised the Hindu community, only Modi's administration. But the people accepted the propaganda as true because there was a silent sanction from the middle class to the post-Godhra violence. Any expose of the state government's role was seen to have indicted the people indirectly. The rhetoric of Gujarat's pride being hurt translated into votes."

This proved once again that regionalism is a potent force. Witness ntr's role in Andhra Pradesh, emerging trumps after being the first CM to publicly oppose the powerful Rajiv Gandhi government on the Telugu pride issue. In Maharashtra, Bal Thackeray was the bad man. But he too won the elections after the '93 riots playing the Maratha pride card. The Congress and the secularists missed this point altogether even though—as poll results proved—the polity had been totally polarised by then. Modi, familiar with the Gujarati idiom, used it to deadly effect while the Congress was shipping in a slew of its CMs, MPs and even some Delhi corporators to drive home their larger worldview. Contrast this with Modi insisting that absolutely no one, the PM included, need campaign in the state. 'Gujaratis only' was his stand.

Says sociologist Ashis Nandy: "We're looking at a state which has had communal riots for the better part of three decades, interspersed by bouts of peace. Gujarat also has the country's largest middle class, nearly three-and-a-half crore of them, who appear quite communalised on account of these riots. The urban secularists who campaigned had no means of reaching out to people, totally unfamiliar as they were with the local language. Their campaign was seen, and certainly projected, as a ploy of the western-educated."

The efforts of the secularists to project their point of view fell well short of what was required in a blistering campaign of this nature.With a natural communicator like Modi on the other side of the ring, the bout was well lost. Analysts particularly remember a Mumbai-based anti-communal activist's speech whose accent and mannerisms only evoked sniggers from those assembled at rallies.

Explains veteran Gandhian Chunibhai Vaidya: "Modi and his minions' misleading rhetoric successfully instilled fear among the people as well as a misguided feeling of self-pride. The two combined to take them to the BJP." Questions Nandy: "Isn't it amazing that 2,000 Muslims get killed in the riots and it is the majority community that is under siege?" Prakash Shah concurs: "The Sangh parivar successfully created a fear among the people and pushed the majority towards a strange 'minority complex'."

The larger political question the results have thrown up is the future of such secularist campaigns. And do campaigns like these take into perspective the larger national political picture? Eminent thinker and Islamic Centre president Maulana Wahiduddin Khan says they do not. "The results can't be seen in isolation. They are an extension of what's happening in Kashmir, the attacks on the Raghunath and Akshardham temples. While the anti-communal campaign in Gujarat was quite prolific, there is not much concern at the daily killings in the Valley where soldiers and innocent civilians are being murdered in the thousands by Pakistan-sponsored terrorists. They are explained away as a peoples' uprising against the Indian state. This is hardening Hindu positions all over the country."

Analysts say the repeated claims of 'consolidating' the Muslim vote invariably leads to a consolidation on the Hindu side—a kind of communalism in reverse. So the Leftist claim that the minority is being victimised is countered by the Right that it's the majority that is being oppressed and minorities pampered. In Gujarat, by the time campaigning came to an end, the Muslim votes seemed with the Congress and the Hindu votes were with the BJP.

In such a climate, it was no surprise that the BJP, for the first time, got over 50 per cent of the total votes polled. They also managed to set up Muslims as potential targets. Says jnu's Imtiaz Ahmed: "The Sangh parivar has successfully penetrated the state structure in Gujarat to pursue their one-nation theory."

The BJP also successfully created the impression that the Congress was a party of Muslims. During the last 72 hours before polling began, a Muslim cleric (who had been rejected by the community itself) even issued an appeal through a newspaper ad asking the community to vote en bloc for the Congress. Modi had thousands of copies of the appeal printed and dispatched to all district centres for mass distribution. Today, the Gujarat PCC is trying desperately to find out who had inserted the ad in the first place.

Clearly, there are lessons to be learnt. The secular opinion, outraged at the post-Godhra violence as well as their open baiting by the Sangh fraternity, had pursued a commited campaign to bridge the communal divide. Just that the tactics used were flawed. Their overkill was a red rag to Modi, who just raised the pitch higher than what rivals and even his own partymen had bargained for. In a divided polity, it was the perfect icing on his cake.