Sangam-era violence was of tribal variety. Later it was between religions. Today, it’s caste riots that mostly erupt in Tamil Nadu. 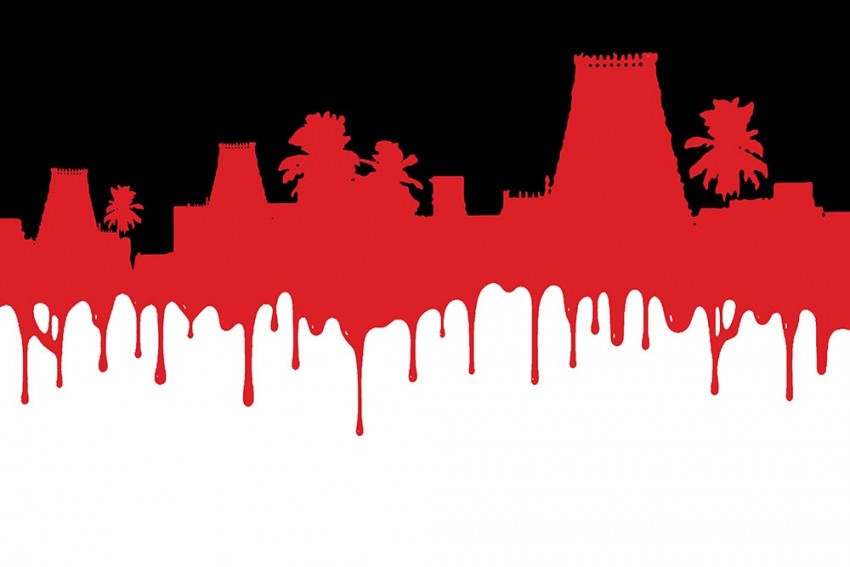 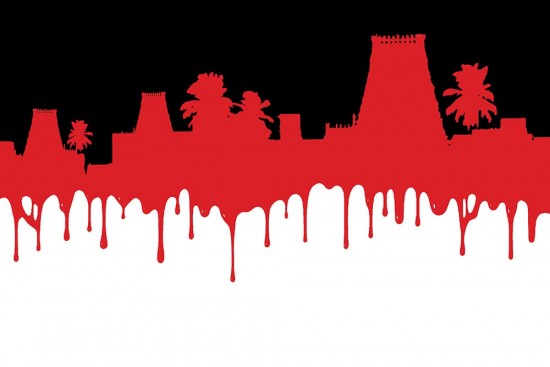 Whenever a strife takes place in Tamil Nadu—­religious or caste-­related—a cry usually rends the air: ‘What is happening to our Garden of Peace’? That the Tamil land is a garden of peace is well-engrained in the minds of most of its people who look upon the communal and caste-related violence that bedevils north India with barely concealed contempt. But every one of them, barring a hopeless minority, have in them an inalienable religious or caste identity, or both, which they will defend with a surprising vehemence. I have seen docile Iyengars going red in the face and gnashing their teeth whenever they feel that their Iyengar-hood is being insulted. Similarly, it will be impossible for anyone, when Thevars are around, to say a word against Muthuramalinga Thevar, a formidable caste icon, and get away with all limbs intact. Aggressive posturing by Hindu, Christian and Muslim ideologues on TV channels is a routine, daily occurrence. The disdain most non-Dalits have for the just struggles of the Dalits is monstrously and demonstrably callous. A keen observer visiting Tamil Nadu will discern without much difficulty that a core of sectarian fire burns inside almost every Tamil, notwithstanding his or her sanctimonious protestations and that its heat is present in even routine discussions on religion and caste.

The fire, seemingly undim­inishable and eternal, has a long history.

The Sangam poems, especially the Puram poems, resound with violence, but it is of a tribal variety rather than a rel­igious or caste one. In the years imm­e­diately following Sangam age too, religious strife appears to be absent. The lovely epic, Silappadikaram, written by a Jain monk, has many passages in praise of Vishnu and other Hindu gods. Its sister epic, Manimekalai, a Buddhist classic, depicts a world where scholars discuss weighty philosophical issues with their swords firmly in the scabbards. Later, when Pallavas ruled Tamil Nadu, the rivalries app­ear to be non-violent. The bawdy Sanskrit classic Mattavilasa Prahasanam makes ample fun of  the Kapalika and Pasupata sects of Shaivism, as also Buddhism and Jainism. The other work, Bhaga­vatajjukam, is a farce on Buddhism from the Brahma­nical point of view. Violence is absent in both of them.

While the Tamil land is littered with remnants of the Jainism of earlier years of the common era, there is no significant epigrap­hic or archaeological rec­ord of Buddhist presence during that period. The earliest Buddhist structure that has been unear­thed in Tamil Nadu is from the 4th or 5th century AD. There is currently a revisionist attempt to establish that Buddhism was a thriving religion in the Tamil country before the Bhakti movement systematically annihilated it, but it is based more on wishful thinking than on solid historical evidence. The Bhakti poems do rile against Buddhism, but their main target is undoubtedly Jainism. 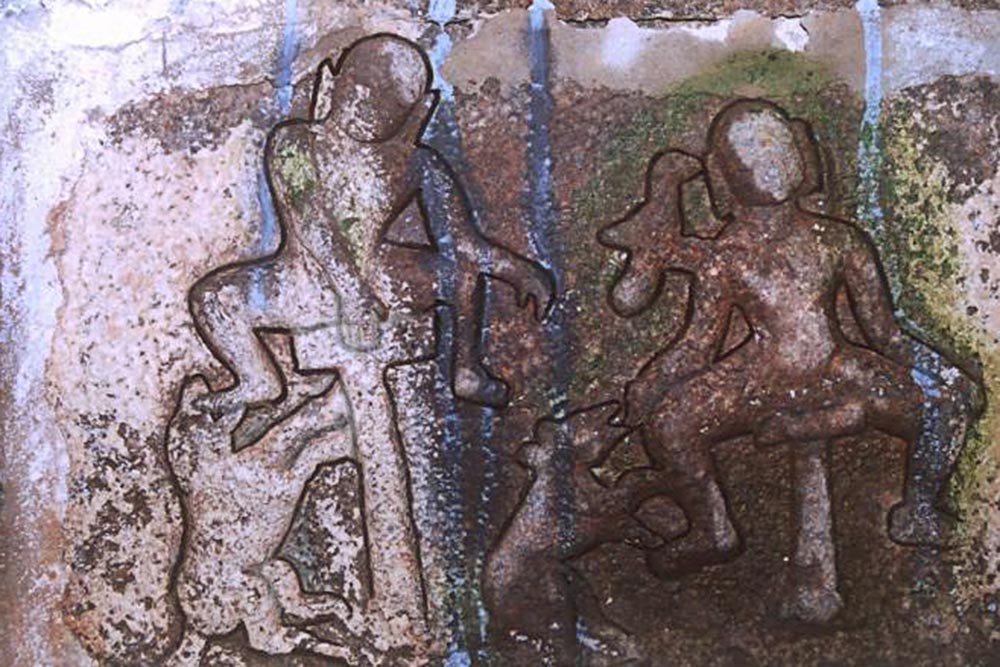 There is a panel in the Vaikuntha Perumal Temple in Kanchipuram built in the 8th century AD that depicts two persons impaled, one upside down, in the presence of the king, probably Nandivarman Pallavamalla. Though this signifies the stern rule (danda) of the king, it brings to the viewer’s mind a persistent myth about the impalement of Jain monks and in fact is being cited in some quarters as proof of the terrifying penalty that awaited the followers of heretical religions of Buddhism and Jainism. According to this myth, which originated in the 11th century, the Shaiva boy saint, Samban­dar, who prospered in the 7th Century AD, defeated 8,000 Jain monks in debate and caused them to be impaled in the city of Madurai. Most historians reject this event as ahistorical. But a few Tamils insist that the genocidal story is true. That even the Jain sources do not speak about the event or that the Jains were thriving long after the supposed mass impalements do not seem to deter them. It was quite possible that incidents of violence against the Jains did take place, but there is no credible evide­nce that there were systematic pogroms to eliminate them. Jainism disappeared from Tamil Nadu primarily because the kings and the rich mercha­nts switched over to Shaivism and Vaishnavism. The wars bet­ween the Jains and the savants of Bhakti continued mainly on the intellectual plane.

The Islamic invasions in the Tamil country took place in the first half of the 14th century. The first invasion by Malik Kafur weakened the Pandyan rule. The second one by Ulugh Khan resulted in Muslim rule in a large part of Tamil Nadu that lasted for about 50 years. There were widespread killings during this time. Even Islamic historians and travellers attest to them. Kovilozhugu, the temple chronicle of Sri Rangam in Tiruchira­ppalli, records that some 12,000 Vaishnavas were beheaded by the invaders. The later Vaishn­ava hagiographies of their acharyas also speak about the pre­vailing violence and the rem­oval of the idol of the Lord Ranganatha from the temple to safeguard it against the invaders. Though the number of 12,000 appears to be an exagge­ration, there is a distinct possibility that mass killings had taken place. 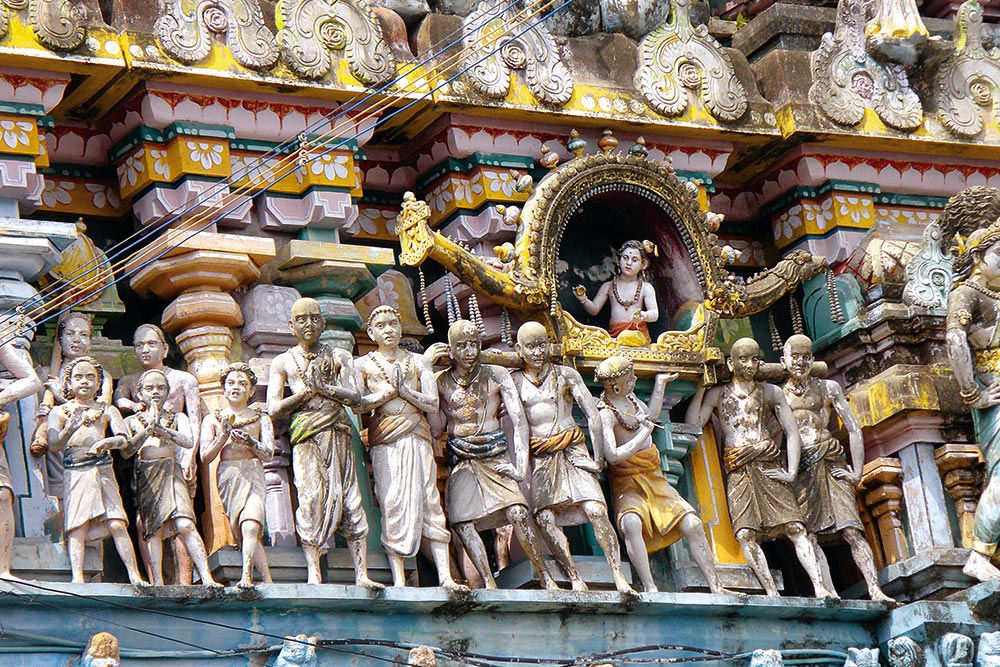 The advent of Christianity in the coastal regions of Tamil Nadu saw another bout of violence. The conversion to Catholicism in the 16th century by the Hindu (Parava) fishermen of the Tamil Nadu coast was largely due to the protection promised to them by the Portuguese from the Arab mara­uders, who incidentally were supported by the Hindu Zamorin of Calicut. They also had to contend with the local communities of Muslims, who were able to take control of the pearl fishery which reduced the Parava fishermen to labourers and even slaves. Francis Xavier records that “the Paravas were oppressed under the Moorish yoke. There were many quarrels between the Paravas and the Muslims resulting in the loss of lives on both sides”.

The caste wars coexisted with religious wars. They have a history of at least 1,000 years. A fact not widely known even to Tamils is that there was a distinct division of some castes into two groups namely, the right-hand castes and the left-hand castes. According to Arjun Appadurai, these classifications comme­nced not later than the 11th century and ceased to exist after the 19th century. Appadurai says there is no single or substantive expl­anation for the division of these castes into two groups, though others contend that the divis­ion was based on their professi­ons. Whatever the reasons for the division, these groups were in violent conflict for centuries. As Mattison Mines says, “Older Kaikoolars (a caste) in their late Seventies, living in Erode, reca­lled the divisions vividly. They relate tales of heated conflict and murder, and the quarrel between the moieties over their respective rights in festivals and the uses of temples in surrounding villages”.

The murders must have been local, but frequent, affairs. 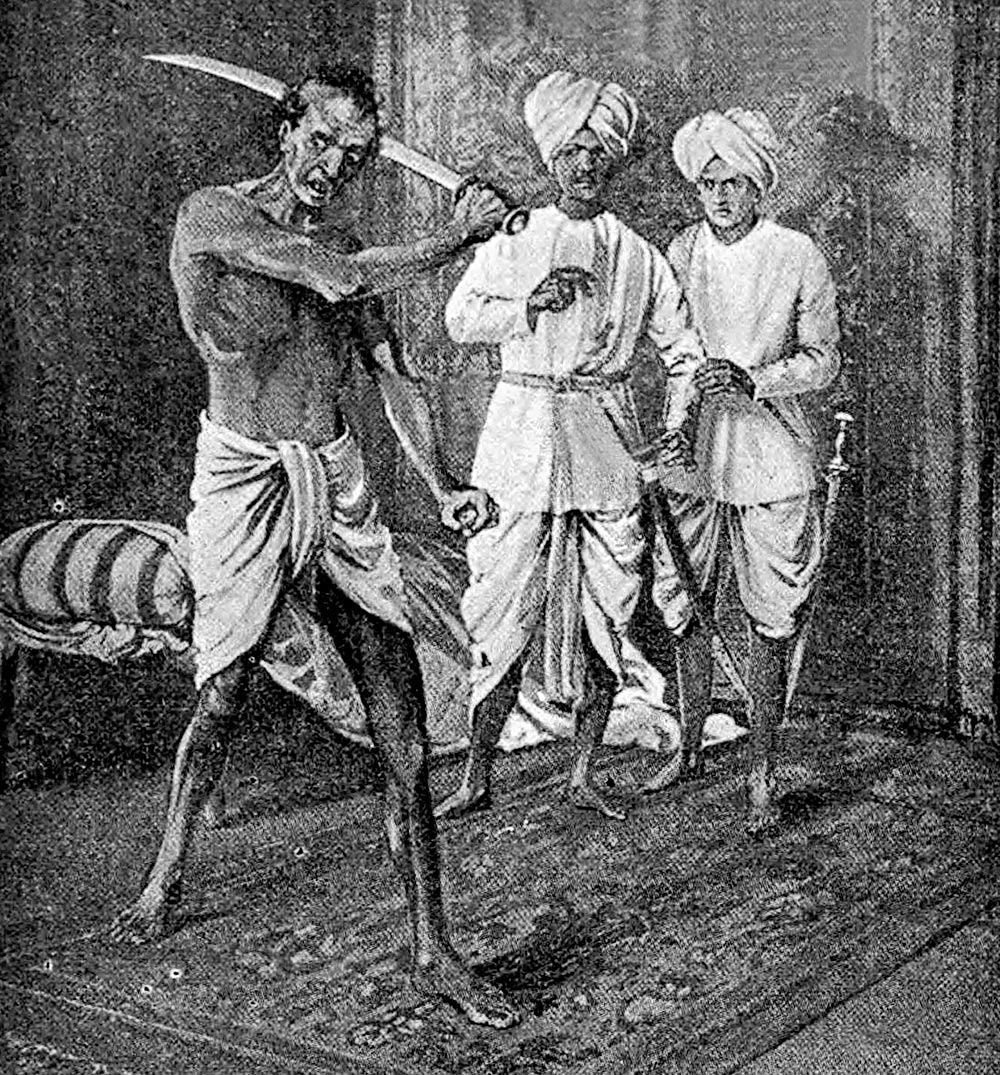 The persistent denial of social privileges to castes that were considered lower in the hierarchy had led to many conflicts and the conflict of 1895 is one of them. The Nadars of Tamil Nadu had to struggle hard to reach where they were and all their social advancements were in the teeth of opposition from jealous rival castes. They were routinely being stopped from taking out processions in public streets. When they protested, the law intervened on behalf of the oppressing castes.  Accord­ing to Pates, the zamindar of Ettayapuram (near Toothu­kudi) as the trustee of the local temple of Kazhugumalai, a small town in the far south, had obtained an injunction restra­ining the Nadars from taking out processions in main streets of the town. The Nadars could take no more. They retaliated by turning into Catholics in a body. In the ensuing dispute rel­ating to a church that came up in one of the main streets, a Brahmin manager was stabbed to death. A riot followed, killing nine more people. The town simmered for many more years before normality returned.

The caste Hindus, particularly Maravars, had for long denied the Nadars the privilege of ent­ering the Hindu temples. They preferred to keep the temples shut rather than giving ingress to Nadars, who were not prepa­red to take such insults lying down. The rivalry reached peaked when in April 1899 the Nadars of Sivakasi burned several Maravar houses. In ret­alia­tion, scores of Nadar villages were pillaged and set to fire. In June 1899, about 5,000 Maravars attacked Sivakasi and killed 16 Nadars. Several Maravars were also killed. The riots that followed quickly spread to the villages in the neighbourhood and appeared for a time uncon­trollable. It took a military force from the nearby Trichy to restore order.

The court decisions in important cases went against the Nadars and they had to wait for many more years before the injustice was rectified.

Pates bluntly summarises the situation obtaining at that time. “As a fighting race by tradition it was but natural that Maravars should take the leading part in the campaign; and perhaps to some extent, not only as sympathisers with their fellow-­casteman…but also as being nearer (though still far away) to the Shanans (Nadars) in the soc­ial scale than many other influential castes, the Maravans had special reasons for their hostility. The hostility, however, was shared by practically the whole Hindu community, the feeling of Vellalans being possibly as bitter as any.” 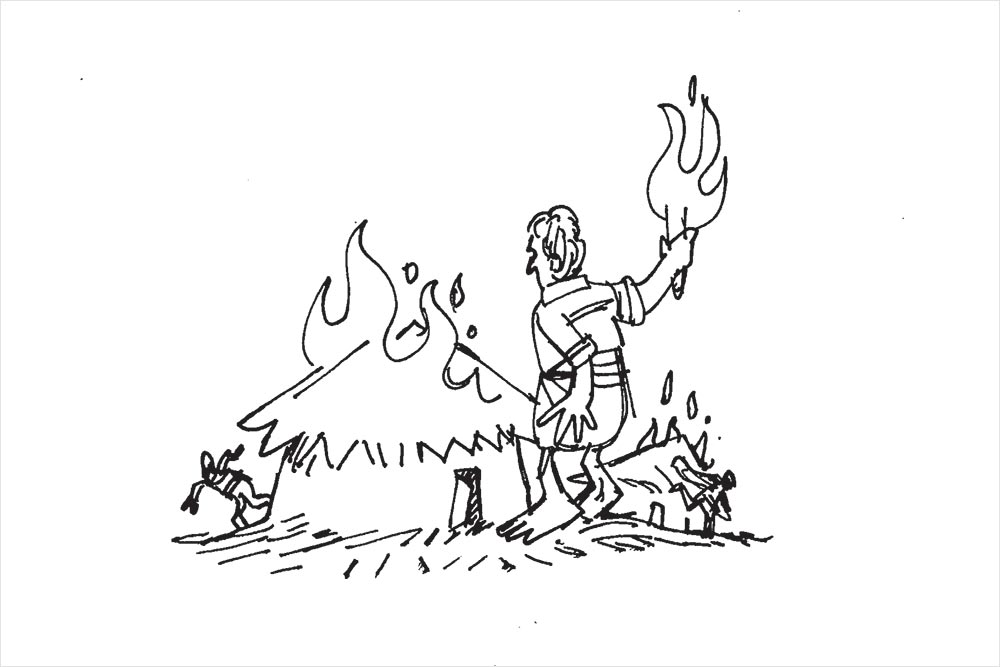 In December 2012, richer-­caste Vanniyars torched around 270 dwellings—huts, tiled-roof and small houses—of Dalits of the Adi Dravidars near Naikkankottai, Dharmapuri. The victims spoke of ‘systematic destruction’ of their livelihood resources.

There were several minor and major cases of caste and religious violence in the years following Independence, but the most brutal ones were all inv­olving the Dalits. The riots that took place in the erstwhile Ramanathapuram district in 1957 saw many Dalits hacked to death. In retaliatory killings and in police firing, a few The­vars were also killed. In 1968, a rich landlord of Tanjavur district burnt alive 44 Dalits. Among them (in Kizh­venmani) were five men, 16 women and 23 children. In 1999, in an incident involving police high-­handedness, 17 est­ate workers, all Dalits, drowned in the river Tamraparni.

A bit way back, in 1993, the RSS’s Chennai office was bombed by a group of Muslims and 11 people were killed. In 1997, a major riot took place in Coimbatore, killing 18 Muslims. The retaliation followed swiftly. A bomb blast in the very next year killed 58 persons.

The Hindu–Christian clashes too turned violent on a few occasions, but the major incident was the one that happened in down-state Kanyakumari district in 1982 involving the killing of six Christian fishermen in police firing.

The sectarian fire will eventually be doused but it will take many more years to  extinguish it completely.

P.A. Krishnan is a Delhi-based novelist who also writes in Tamil