The US has ways around every international agreement 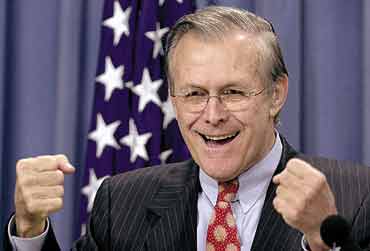 outlookindia.com
-0001-11-30T00:00:00+0553
IS it the mother of all double standards in the war against Iraq, turning the stated aim for Operation Iraqi Freedom on its head? Apart from the unrivalled arsenal of the US military in Iraq, its troops are also armed with "riot control" agents and "calmative" chemicals to deal with tough urban situations. President George Bush reportedly authorised the Pentagon to use "riot-control" agents such as tear gas and pepper spray in certain battlefield scenarios before the war started. Experts contend the order violates the Chemical Weapons Convention (CWC) which bans the use of any chemicals in warfare. But Washington claims the use of "non-lethal riot-control" gases can save lives, acting once again by its own set of rules and pitching itself in a lonely corner of world opinion.

Chemical weapons and arms control experts told Outlook that Bush gave a green signal through an "executive order" before the US attacked Iraq. One report says the toxic agents were shipped to the Gulf early March. The controversial move angered British officials, who told the Pentagon they wouldn’t allow their troops to be part of any operation involving chemical agents.

The US plans came to light when Defence secretary Donald Rumsfeld publicly lamented the "straitjacket" the CWC imposed on US forces, listing situations where "non-lethal riot-control" agents might come in handy. He was testifying on February 5 before the House Armed Services Committee, the same day Secretary of State Colin Powell tried to convince the UN Security Council of Iraqi stockpiles of chemical and biological weapons.

"It would be a disaster if the US used any chemical agents. Most countries think it would severely undermine the CWC," John Issacs, president of the Council for a Livable World, a group working against weapons of mass destruction, told Outlook. "It is another case of the world thinking one way, and the US going the other way." Commented Victoria Samson, a research associate at the Centre for Defence Information, "This administration seems more than willing to step around its international obligations."

During the CWC negotiations, the US claimed that under 1975 presidential executive order No. 11850, it was entitled to use riot-control agents under five specific circumstances, a stand all major countries opposed. The US exemptions are not recognised by other signatories.

In his February 5 testimony, Rumsfeld gave examples where riot-control agents might be desirable—situations involving "transporting dangerous people in a confined space" or where women and children are caught with enemy troops "in a cave". He further said he had devised "rules of engagement" for ground commanders to specify situations in which "non-lethal" agents might be sprayed or lobbed. George Bush Sr had barred the Pentagon from using any chemical agents in the 1991 Gulf War, according to Stephen Baker, a retired naval commander who was part of that war. "They made attempts to request but were denied. I don’t support the use of any chemicals even though weighed against the negatives of using bullets on crowds, tear gas is preferable," he told Outlook.

But experts dismiss the whole concept of "non-lethal" agents—in a confined space, things can turn lethal, as shown by the Moscow Opera House terrorist incident last November. The chemical used is believed to have been a derivative of fentanyl, varieties of which the US military has researched, according to Barbara Rosenberg, a bioweapons expert at the Federation of American Scientists. She said there was no "calmative" which is truly reversible and that "even a riot-control agent can kill in high dosage in an enclosed space."

The military brains began exploring new ideas after the 1993 Somalia debacle in which US troops were ambushed in an urban setting. The Pentagon launched the Joint Non-Lethal Weapons Directorate (JNLWD) in 1997 with a budget of $25 million to explore chemicals for crowd control but by 2001 the directorate was exploring their use in "the full spectrum of warfare". A chilling report submitted to the jnlwd in October 2000 talked about the "choice administration route, whether application to drinking water, administration to the skin, aerosol spray inhalation or a drug-filled rubber bullet, will depend on the environment". Possible situations include "hungry refugees excited over food distribution", "a prison setting" and "hostage situation".

What Are War Crimes?