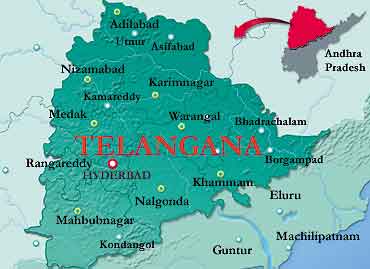 outlookindia.com
-0001-11-30T00:00:00+0553
Telangana History: Andhra Pradesh was formed in 1953. In 1956, Telangana, the Telugu-speaking part of the erstwhile Nizam’s state merged with Andhra Pradesh. There was protest at the time of merger. There was an informal agreement then on job quotas for Telangana. Beginning in the late ’60s, regional leaders accused the state government of going back on its promise. In ’98, the BJP passed a resolution for a separate Telangana. In 2000, K. Chandrashekhar Rao quit the TDP to form the Telangana Rashtriya Samiti.

Just a stone’s throw away from the BJP’s national headquarters at Delhi’s Ashoka Road is the residence of a former party member, A. Narendra. His home is now used as the Delhi office of the Telangana Rashtriya Samiti (TSR), a three-year-old political outfit that spells big trouble for the BJP and its most powerful ally, the TDP, whose 29 MPs currently give vital outside support to the NDA government at the Centre.

It’s widely believed the forthcoming assembly elections in Andhra Pradesh will be won or lost in Telangana, which accounts for 107 of the state’s 294 assembly seats. The outcome of the simultaneous Lok Sabha polls too will be decisively influenced by the Telangana region that elects 15 of the state’s 42 MPs.

The old but emotive demand for a separate state of Telangana is not rooted in linguistic or ethnic differences, but in different histories. The Telangana region was ruled by the Nizams of Hyderabad, while Rayalaseema and coastal Andhra were under direct British rule and a part of the Madras presidency. As political commentator Kancha Ilaiah says, "The cultural identities, festivals and customs are different. While the Telangana region was heavily influenced by Muslim culture, Brahminism dominated in the rest of Andhra." K. Chandrashekhar Rao, founder-leader of the TRS, puts it like this: "Except for language there’s no similarity. The food customs are entirely different. Biriyani is served even at Hindu marriages."

Still, as part of the linguistic reorganisation of states, Telangana was merged with Andhra in ’56. But over the years the region, rich in minerals and forests and irrigated by both the Godavari and Krishna rivers, has complained of being exploited by greater Andhra. Many of the promises made during the merger weren’t honoured. So, the statehood demand has cropped up with increasing frequency. 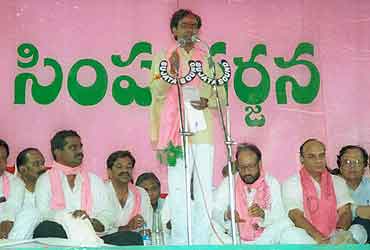 The emergence of the TRS has now reignited the old fires. And the proposed Congress-TRS tie-up has only added to Chandrababu Naidu’s worries. As it is, after eight years in power, the CM has to combat anti-incumbency. "Once the TRS and the Congress come to an understanding, no god can save Chandrababu Naidu," says Chandrashekhar Rao. In the last assembly polls, the seats in Telangana were divided almost equally between the Congress and the TDP. This time around, the TDP will certainly face heavy losses in the region and will try to compensate in greater Andhra. That’s why the party remains vehemently opposed to the idea of dividing up the state. The TDP is, in fact, hoping there will be a backlash of sorts in other parts of the state, putting the Congress in an awkward position in Rayalaseema and coastal Andhra.

The Congress, meanwhile, is hoping to have its cake and eat it too. It has demanded the setting up of a second state reorganisation commission to look into all such demands. However, the party is playing safe and is stopping short of unequivocal support for Telangana for fear of alienating supporters in other regions. This Congress reluctance may jeopardise the formation of an alliance. Chandrashekhar Rao, for instance, has demanded that the Congress take a position on Telangana in its manifesto.

The Congress, however, maintains it’s determined to see there’s no split in the anti-NDA vote. Y.S. Rajasekhara Reddy, Congress’ main contender for the CM’s post, says: "This is a do-or-die election for us. We are beginning to rise above internal party differences and those with other potential allies." Though the communist parties, which claim about 6 per cent of the vote in the state, are ideologically opposed to the idea of a separate Telangana state, they are expected to support the anti-NDA parties. Reddy remains confident that the Congress will manage to carry disparate parties like the TRS, the CPI, the CPI(M) and the Majlis to forge a strong anti BJP-TDP front.

The Telangana issue has certainly placed the BJP in a quandary. Most of the party’s support base is in Telangana and in 1998 it had passed a resolution demanding the creation of a separate state. But it placed the issue on the backburner once it joined hands with the TDP in 1999. "We’ve explained to the cadre that this is not the opportune time to raise such issues as the priority right now is to concentrate on bringing the NDA government back to power at the Centre," explains BJP state vice-president Seshagiri Rao. The upset rank and file of the state unit point out that the BJP’s voteshare has been declining ever since the party became ambiguous about Telangana.

The BJP, which currently has seven MPs from Andhra Pradesh, is today quite dependent on the TDP. But Ilaiah says, "The ground-level strength of the TDP is no longer what it used to be." The CM’s much-touted economic reforms have only benefited the middle classes, say critics. They believe the poor have only got poorer in a state where 3,000 farmers committed suicide in the past few years and where 1,400 daily wage earners died of heat stroke last summer.

The power sector reforms ushered in by the Naidu government are particularly unpopular among farmers in Telangana where most depend on pumping out groundwater from deep bore-wells to irrigate their fields. The rest of Andhra is largely irrigated by the canal system which consumes far less electricity. "Of the 19,46,000 pumpsets in the state, over 15 lakh are in Telangana alone because farmers here are being denied irrigation water the bulk of which goes to other parts of the state," says Chandrashekhar Rao. The rising costs of power and the "unfair" distribution of irrigation water are the biggest grouse for the advocates for separation.

Naidu has a larger-than-life image and a reputation of being an excellent political manager. These skills will certainly be put to a gruelling test this summer.