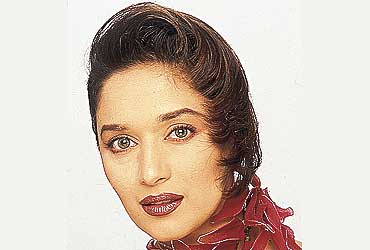 outlookindia.com
-0001-11-30T00:00:00+0553
Madhuri Dixit is doing her bump and grind routine Badi mushkil baba badi mushkil in a telly promo of Lajja, Raj Kumar Santoshi's flawed paean to woman-hood. Who cares if the film's bombed? Not Mumbai-based film trade expert Amod Mehra, who is agape with wonder watching the promo in his office. "Madhuri mein abhi bhi bahut dum hai (She still has a lot of force in her)," he sighs. Call it oomph, spice, charisma, magnetism, sensuality or plain pandering to the male gaze, it has defined Madhuri's on-screen persona. Now, these are qualities none of today's Bollywood girls can match. Look at Karriena Kapoor twirling to Maine koi jadoo nahin kiya or check out Amisha Patel crooning Kaho na pyar hai—they simply don't cast a spell on filmgoers. "Today's girls just don't have it in them. Where are the heroines anyways?" wonders Mehra.

It's a question many in Bollywood are asking these days. Has the superstar actress, somebody who could almost carry a film on her not-so-frail shoulders, withered away? Sanjay Dutt surely feels so: "Madhuri Dixit was our last female superstar," he says. He is right. In a male-dominated industry, the Queen Bee is elusive today. Every decade has thrown up a hugely successful heroine—someone who has delivered the hits, captured the audience imagination, been the distributors' favourite. And, hey, even had considerable clout in the industry. Remember Mumtaz, Hema Malini and Rekha? Then there was Sridevi, dubbed the "female Bachchan" of her times. And, of course, La Dixit, of whom it was said that Pakistan was willing to trade Kashmir for her.

But in the limiting, hierarchy-ridden industry, Madhuri, with the twin burdens of marriage and age on her shoulders, doesn't sell anymore. Juhi Chawla prefers to enjoy the pleasures of motherhood. Kajol, Karisma Kapoor and Aishwarya Rai, considered potential superstars not so long ago, are grounded with few projects after a brief blitzkrieg. They haven't managed to whip up the hysteria and heat which Madhuri did as the dhak-dhak girl or Sridevi created with Kaate nahin katte... in Mr India. Consider the newer crop of sizzlers: Sonali Bendre, Rani Mukherjee, Sushmita Sen, Raveena Tandon... None of them have actually set the cinemas and box-office afire. Karreina, Amisha and Preity Zinta, the new Spice Kids on the block, are still trying to inch their way in. "There is no No. 1 heroine today," says Taran Adarsh, editor, Trade Guide. Agrees critic Uma da Cunha: "There's a lot of uncertainty. Everybody's looking for a Queen Bee."

Why this dearth of mega-heroines? Madhuri's at her diplomatic best: "I don't know. All I know is that I've worked very hard and sincerely. I tried to do my best." Are today's girls not as fiercely competitive as they used to be? "Sure," feels Rani Mukherjee. Says she: "Today, everyone's chilled out. There's no cut-throat competition. No one person is at the top. You're successful and sought-after and that's enough." Bindaas (happy-go-lucky) is the key word. "The girls are less formal about how they are perceived, they are more casual and accessible," says actress-producer Pooja Bhatt.

Also, the marquee is getting crammed with far too many faces. "I and my peers stayed around for a long time because there weren't too many newcomers," explains former golden girl Hema Malini. "Right," says Rani, "Now there are so many talented people coming in at one go. The audience finds it difficult to decide who's what." The girls don't get to stay long enough to make a mark and by the time one of them stabilises, another one comes in and ousts her". Their fortunes change from Friday to Friday," says actress Rati Agnihotri. If the heroine delivers one flop, the producer dumps her for the next project. "The girls are playing in one-dayers. There are no Test matches anymore," says Adarsh. This, coupled with a lesser number of hits and the fast-declining attention span of the audience, has meant that before you even blink, a newcomer becomes history. "Of late, a lot of films have been flopping in a big way, so even an actress' good performance isn't highlighted," says distributor Shravan Shroff.

In fact, the girls today are far more confident, educated, self-assured and articulate than their predecessors. "They are ambitious, have their priorities right, are trained in every field and are all ready to face the camera," says Rati. Agrees Madhuri: "They have come well-groomed, know what filmmaking is all about." But others believe that the girls are not as committed and dedicated and lack seriousness and sincerity. "Anyone can be No. 2 or 3. But to be No. 1 requires a lot of pain, trouble and discipline. You can't party all night and then turn up for an early morning shoot," says Komal Nahata, editor, Film Information. "Their loyalties are with their boyfriends than the projects," quips Mehra. "Being No. 1 is all about giving yourself up totally to your profession. Today there are far too many distractions," says Juhi Chawla.

How do you define a star anyway? Satyajit Ray had once said that a star continues to look interesting even if he or she does nothing on screen. "They can set the screen on fire all by themselves," says Nahata. "There has to be the right chemistry or alchemy at the right time," says distributor Uday Kaushish. That's lacking. "There's no khaas baat in any of the heroines I watch on TV today," said veteran actor Bhagwan in a recent interview. Maybe the girls lack presence, that personal sense of style. They all look tailor-made to specification, products of a mass assembly-line manufacturing system. "They lack a strong identity and get replaced easily," says Rati. Filmmaker Tanuja Chandra blames it on the clone factor: "Most of them model themselves on a similar modern-young-chick type. They are not letting their individuality flower. They are so alike that they are inter-changeable. They need to plumb their own depths." Adds the feisty Pooja: "What we lack are women of substance." So, it's not surprising that today's Spice Kids don't have the regal beauty of Hema Malini, the sauciness of Rekha, the imperious charm of Sridevi or the mystique and nostalgia value of Madhuri.

The in-your-face sexuality and attitude of today's girls could be a turn off for a lot of Hindi film audiences who've grown up on a staple diet of 'traditionally good-looking' heroines in stereotyped gender roles. "Sushmita seems to be an outsider, her aura is completely European. Bipasha Basu looks like a product of a multi-cultural school in New York," says critic Partha Chatterjee. Also, the idea has been to cater largely to the urban, young, popcorn crowd, which doesn't translate into an all-India appeal. "They have the body but no body language to communicate with the masses," feels Mehra.

The media scrum also ensures that star actresses don't get more than the 15 minutes of fame. "The media puts the stars on a pedestal overnight and then throws them out as quickly," says Adarsh. Every new star signs dozens of films and ad campaigns. Besides, there are the customary TV appearances and inaugurations."Anyone can pay money and call the heroines to open a boutique or a shop these days," says Hema. Such over-exposure is counter-productive. "They are all over the place, all the time. They are losing their mystique and charisma," says film critic Deepa Gahlot. "As long as one's fist is closed, the world wants to know what's inside. But once it's open it loses all its worth," says Hema.

The kind of roles and scripts the girls get to play is also very important. But then, are there enough good writers and directors? No, say some. "You cannot survive in the industry when the roles you get are so trivial. Roles which give the girls a larger-than-life image are not being written," says writer-lyricist Javed Akhtar. "Ultimately, it's the market to blame, the actor is only a cog in the wheel," agrees Gahlot. "Women rarely have roles written for them. The attention has been left for the males." Opines veteran actress Waheeda Rehman: "In that sense, even our greatest of actresses haven't really ruled the industry."

The upshot is a fading star system. Gahlot says it has largely become extinct with no major star capable of delivering a good initial, leave alone a blockbuster. "Instead of one top star, we should throw up a host of them. That will lend vitality and versatility to the movies," says da Cunha. There's also a constant pressure on the stars to conform so as not to slip down the ladder. "Immensely talented people get dictated by the box office. The cash flow doesn't encourage creativity," says da Cunha.

But the demise of the Queen Bee could be a blessing in disguise for good cinema. Some potential Queen Bees seem to have dropped out of the big race to essay meaningful roles which may not kick dirt at the box office. Karisma, for instance, has moved on to Fiza and Zubeida from Hero No. 1 and Coolie No. 1. Tabu is now recognised more for Maachis, Hu Tu Tu and Chandni Bar than a Vijaypath. "Everyone has realised that just doing films for the sake of doing them does not make you higher than the others. It's your work that counts," says Rani. Maybe the demise of the Queen Bee is not such a bad thing.