Reeling under lawsuits and near bankruptcy, ISKCON goes in for a less strident image 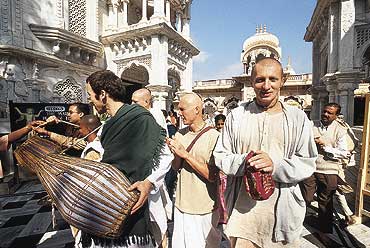 outlookindia.com
-0001-11-30T00:00:00+0553
Lord Krishna's international image is in for a serious makeover. Burdened with $400 million in claims and a consequent bankruptcy protection filing in the United States, the International Society for Krishna Consciousness (ISKCON) is seeking to radically alter its decades-old monastic tradition to that of a congregational one, in a bid to salvage declining membership and resources across the globe. "The focus is to create more good citizens and not necessarily saints living in the commune. It'll now be a blend of both the spiritual and material life," Anuttama Dasa, chief spokesperson and director of ISKCON's all-powerful Global Business Council (GBC), told Outlook.

A large segment of ISKCON's one-million-strong devotee base has increasingly turned to family life, reflecting the speedy reorganisation within the sect that runs 300 temples in 71 countries. Today, temple-based members number just a little over 10,000 and all ashram-based schools have radically altered their curriculum in an attempt to close one of the ugliest chapters in the commune's history: a spate of child abuse cases.

Says Dasa: "We're confident the new relaxed focus will help increase awareness among followers and help us forget the past. After all, innocent people shouldn't be punished for the deeds of individual deviants acting in total violation of our principles and teachings." The GBC meeting next week at ISKCON's global HQ in Mayapur, West Bengal, will discuss among other issues the group's new-found focus.

Dasa refused to admit whether the sect was headed for financial ruin because of the US bankruptcy filing, but did say there was pressure for financial reorganisation on ISKCON centres outside the US and Canada. "But we also see it as a wake-up call, and hence are encouraging our other centres to adopt measures which can guarantee the sect's smooth running in the future."

At Vrindavan, one of ISKCON's main centres, devotees agree that a change of image will help the sect get rid of its troubled past. Earlier, members were supposed to put spiritual practice over and above anything else. "As a result, marriage and family life came to symbolise what was nothing but spiritual failure. And children, a sexual product of that very failure, were unfortunate victims of this pseudo-monastic stigmatisation," says life member Neelmadhava Dasa.

Temple president Mahaman Das agrees: "We are a sect with deep roots in Hinduism. The new focus is not a complete shift but an attempt to blend religion with modernism. And it's sooner done the better. Otherwise, our past will continue to haunt us. See for yourself: we are not forcing anyone to adopt a certain procedure and are flexible. We are awakening fast to the realities of life. We realise the suit threatens to shut down an entire religion and that we need to take corrective steps."

And it has started in right earnest. At the Vrindavan Bhaktivedanta Gurukula and International School (similar ones are there in Mayapur, Mumbai, North Carolina, Alachua and Dallas), a motley crowd of 35 students study the CBSE syllabus, read Harry Potter and Heidi, play guitar, soccer, volleyball and shave heads only on certain occasions. Says burly Raghav, a student with a penchant for scoring goals from 40-yard free-kicks: "We learn everything in common with schools elsewhere. Once we finish Class VIII, we'll have to go to some outside school. So we don't follow anything that's special and cannot be practised outside." Teacher Gokultarini-Devi Dasi nods in agreement: "Students need to integrate with the changing world. They can't be kept in isolation. The purpose of the gurukul is to blend the ancient Indian system of education with the needs of the 21st century."

School director Ananda Vrindavana-Devi Dasi concurs: "We don't have a rigid approach.We now prefer students whose parents stay close and actively encourage them to go home on holidays, lead routine lives like anyone else. We don't tell them to drop Harry Potter. We might even encourage them to call him Harry Potter Dasa." Well, that's being a little more realistic.

'No Formal Alliance, But A Very Rich One'