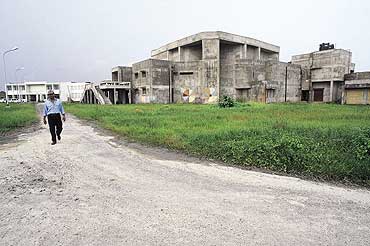 outlookindia.com
-0001-11-30T00:00:00+0553
When master filmmaker Satyajit Ray died in 1992, i&b ministry mandarins found a name for the new film institute they were planning. The Satyajit Ray Film and Television Institute (srfti) was to be the country's second such endeavour after Pune's Film and Television Institute of India (ftii), but on a much bigger scale. Five years after srfti was registered in 1995, and with only one batch of 32 students passing out so far, the sprawling training centre, on 40 acres of wetlands to Calcutta's east, is today struggling to justify its relevance.

The questions are too many, the answers too few. From the outset, srfti, which offers a three-year course in direction, cinematography, editing and sound recording, was plagued by students' unrest. No equipment, no teachers, no facilities, not even a director. Classes were boycotted for over a month and the crisis was "somewhat resolved" with the arrival of some state-of-the-art equipment and a full-time director. But, the peace was fragile, as the students intermittently boycotted classes. The second batch, which enrolled in 1997, took recourse to agitation, alleging large-scale misuse of the institute's equipment. Arun Jaitley, whose ministry rapped the srfti management for the unexplained favours to "outsiders", managed to broker a truce.

In its brief existence so far, srfti has seen the exit of founder-chairman Buddhadeb Dasgupta, the first director Debashis Majumder, dean Anup Mukherjee and ad-hoc dean Jagannath Guha. The governing council was reconstituted when the present chairman Gautam Ghosh took over. Besides, several faculty members had quit. srfti today has no dean and is run by ad-hoc director Jatin Sarkar. Already the second batch, which will pass out by March, is several months behind schedule. But as a third batch could not be enrolled in the past three years owing to the administration's apathy, nobody's sure of the institute's future.

Right from the start, the srfti always seemed a "premature baby". Says Dasgupta: "In retrospect, it seems the biggest blunder was starting the course without readying the infrastructure. We didn't even have the basic infrastructure when the first batch was admitted. We thought we could overcome the teething problems." Dasgupta resigned after two-and-a-half years. "I resigned because I was not finding time to do any creative work," he claims, though srfti circles believe he was disgusted with outside interference. Former dean Mukherjee is, however, forthright. "I was disgusted and the atmosphere was not congenial to work anymore." After Dasgupta, Ghosh took over the reins of srfti and faced the students' wrath on charges of "corruption and apathy". But students don't have a kind word for their present chairman. "Our chairman and former dean illegally hired out the institute's equipment and facilities for personal gains," says Sudip Chattopadhyay, an editing student.

In the meantime, the costs are piling up. Already, about Rs 60 crore has been spent on srfti. The institute has 75 staff members, of which only nine are teachers. There are 43 spacious apartments inside the campus for the staff. The ministry's experiment with filmmakers as part-time academics has clearly failed. Says a former srfti functionary: "It's not enough to cite sentimental reasons for squandering public money on a film institute in Ray's home city when the Pune institute can expand. We could well have enhanced the utility of ftii by contributing to its infrastructure and perhaps naming it after the master. "

A New Song of the Road