The film as a whole is nothing more than a celebration of the dumb and the moronic. 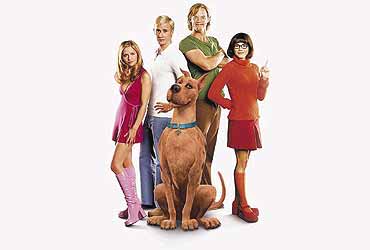 Scooby Doo can be any critic's worst nightmare. It's such a puerile piece of cinema that even as it provokes you to draw out your fangs, it also leaves you groping for just the right belligerent words to make a mince of it. Don't say we didn't warn you—Scooby Doo is the kind of film you should keep your kids miles away from. Unless it warms your heart to see them laughing at crude jokes about compelling bodily endeavours like burping, farting and pissing.

The toilet humour apart, the movie as a whole is nothing more than a celebration of the dumb and the moronic. Take the lead characters with their horrid hair-pieces. It's the worst parade of fools you'd have ever suffered: the silly damsel in distress Daphne, the insufferable good-looker Fred, the uptight smart girl Velma and, of course, the foodie friends—a perennially paranoid Scooby Doo and the irritating Shaggy. Not a single one of them is someone you can warm up to, not one of them can be held up as a role model for the kids. All right, each of them has been virtually transplanted from the Hanna Barbera cartoon series, but the problem is that despite becoming human in this live action feature film, they are not able to shed their cartoonish proportions. A film like Stuart Little works primarily because each of its animated characters has a very well-defined personality, while those in Scooby Doo are no more than cardboard cutouts. What's worse, they are played out by some of the most histrionically-challenged actors: Sarah "Daphne" Geller can't be anything but Buffy The Vampire Slayer and Freddie "Fred" Prinze doesn't seem to have the spark to carry him beyond one I Know What You Did Last Summer.

In the movie, the five members of Mystery Incorporated reunite to head for the Spooky Island, an amusement park whose owner thinks its visitors are being put under a spell. What follows are many silly encounters with some bad-breathed monsters who enter human bodies to get some spf protection from the sunlight. The villain of the piece turns out to be the puppy, rather the dog with a glandular disorder, Scrappy Doo. The adventures, if you may so call them, are so infantile, illogical and tiresome that far from taking you to the edge of the seat they nudge you to sleep. It's a lazy film that makes no effort to appeal to a kid's imagination, but prefers to feed him on instant junk. It has nothing to say or communicate. Even its look is awfully cheesy and clunky, the SFX notwithstanding. Scooby Doo makes Stuart Little seem a Citizen Kane in comparison. Thank God it doesn't stretch beyond the 80-odd minutes.