For western dips, the India ‘hardship’ posting is a Raj-era event 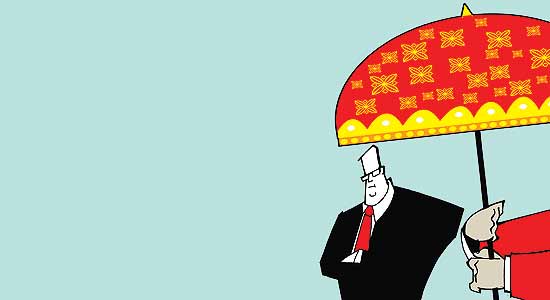 Flying one’s country flag in foreign lands is diplomatic business. And for Delhi’s vast and glaringly visible diplomatic corps, it’s one riddled with soothing inanities. The ostensibly grave and glamorous mien of Delhi’s diplomatic circuit, dominated by the Western, English-speaking bloc, is belied by the reality of its unreality.

Delhi’s diplomats, especially from the Developed World, are handicapped by the ‘hardship’ posting that’s India. Palatial air-conditioned bungalows, armies of servants and access to facilities prohibitively expensive at home, are some of the adversities diplomats assigned to India have to tackle. But so addicted do they become to these ‘hardships’ that some, especially the wives, are compelled to attend ‘detoxification’ therapy sessions on returning home, to help ease them into their austere, faceless existences.

Supermarket bargain-hunters on hardship postings to India are overnight transformed into owners of chauffeur-driven cars in addition to hosting lavish banquets organised by remote control. And for it all, many diplomats are paid ‘hardship’ allowances. Many diplomats at the social nadir in their home countries find themselves at the top of the social heap here, much sought after by Delhi’s ‘upper’ and ‘intellectual’ echelons. Droves of “good chap” locals are handed down from departing diplomat to arriving diplomat. Most of them are permanent fixtures on embassy cricket teams, polo chukkers, cross-country runs or tedious diplomatic dos. These khidmatgars form part of the essential local flavour, necessary for any diplomat to get a “handle” on any foreign country, especially one as chaotic as India.

The irony, however, is that these diplomatic clones have now acquired both the jargon and mannerisms of their mentors and, far from being representative natives, only buttress foreign—particularly developed world—prejudices about Indians. Many such loyalists utilise what passes for charm like a lead cosh to confirm their social standing in CD circles, ensuring themselves a re-invite to the next boring diplomatic soiree with bland food that, in many cases, includes cold pumpkin, or even worse colder beetroot soup.

To further fortify the CD status of diplomats are the walas: carpet-wala, ethnic bric-a-brac-wala, houseboat-wala and aira-wagera or etc wala. All self-respecting dips must have a string of walas, particularly since overall standing in the CD community is directly related to their brilliantwalas’ ability to produce something “exclusive”, the subject of envy.

These walas, too, over the years have earned a fortune selling “genuine” Mughal miniature paintings and Indian bronzes fresh off the assembly line. This is in addition to personal services like personalised tennis coaches, masseurs and masseuses and manicurists who make house calls.

But this expansiveness and social activity are spread somewhat unevenly across the diplomatic board. Britain and its erstwhile colonies—America, Canada and Australia—broadly head the social pecking order in Delhi’s CD world. These English-speaking dips are the most active and visible of their tribe.

Many, however, live cocooned existences inside their huge embassy compounds, eking out their three-year tenures with limited interaction with the country or its peoples except via the PLU (people-like-us) Indians. Many a western diplomat has remarked that many of the Indians they know were more English than the English.

Of those who live outside their embassies, embarrassingly few return with a firm handle on India. They seem to follow the dictum that life in the far outposts of empire is hard and no effort must be spared to make it similar to existences back home. Mid-week is occupied with rounds of tiresome parties, diplomatic club luncheons and, for some, sport in the evenings. For the dip wives, the day’s activities include mahjong, coffee parties and attending sales of ethnic goodies organised by the Diplomatic Services Wives Association or the Diplomatic Commonwealth Wives Association. The more trendy and ‘culturally minded’ organise Hindi tutors.

The heavy weekend frivolity, however, kicks off at noon on Friday at the privately organised Canadian “Cabana”, gravitating later to the Australian’s Thank God It’s Friday, the tgif club. Both places are havens for many diplomats to imbibe away the week’s hard work and get down to some serious enjoyment over the next two days.