The British left an India saddled with huge problems, economic and social. Many of these are still with us, so I don't need to pretend that anything Bhabha did helped to solve them... 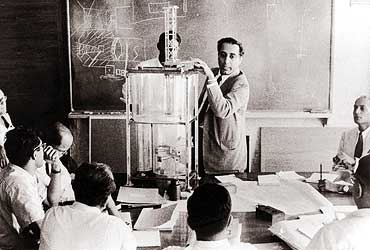 outlookindia.com
-0001-11-30T00:00:00+0553
Who was India's most influential scientist, post-Independence? My vote goes to Homi Bhabha. The British left an India saddled with huge problems, economic and social. Many of these are still with us, so I don't need to pretend that anything Bhabha did helped to solve them. I don't need to pretend, either, that his scientific research was amongst the best, since he stopped doing research in theoretical physics when he dared to organise large-scale, advanced scientific research.

It was an activity the country had never done before, a full-time job which few others dared to undertake. It could easily have ended in a total fiasco, since nuclear physics or atomic energy or nuclear energy—give it what label you like—was never even conceivable in pre-independent India. Even if it was, few would have had the gumption to undertake it. Today's Indians, who never deny they are an ancient civilisation, prefer to forget they are also rather timid. Organised activity in frontier areas meant creating scientists to compete with the best worldwide. "Globalisation" is the fashion in the commercial world, but scientific research is always global. You do it well, or you sink. The mechanisms protecting fledgling Indian enterprises were not available to Bhabha. The Department of Atomic Energy still stands, warts and all, because the guy who first saw it as a gleam in his eye had built up a team that flourished after the tragic, early death of their leader (politicians please note).

Turning to the applications of N-science, did Bhabha's efforts bear much fruit? I think not. It seems to me that the very many fine Indian efforts at nation-building have not borne fruit, mainly because we have neglected the most important component of any stable, strong and united society. Countries need armies, governments, brilliant people to act as leaders, but no nation can be adequately modern without educating the large mass of its citizens.

We failed to do that, and Bhabha is as much responsible as our other leaders for it. When he organised the Atomic Energy Commission, he snatched the best available scientific manpower—which existed in the universities. With their exit for the then more stimulating field of pioneering research, teaching at the university level sank. Needless to say, it's in dire straits today.

(The author, an eminent physicist, is ex-director, J.C. Bose Institute.)