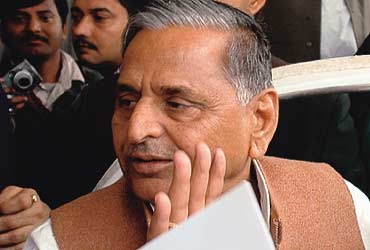 The Congress' move reinforces the growing perception about a law and order breakdown, but the numbers still favour CM Mulayam Singh Yadav. That is, unless the Supreme Court pronounces the merger of the 33 Bahujan Samaj Party rebels with the SP as illegal, before January 25-- the day the state government faces its vote of confidence. If that happens, the government will fall, and President's rule will follow in the run-up to the assembly elections due in April this year. For, without the BSP rebels, the government's strength will be reduced to 177-- eight short of the minimum of 185 it will require to stay afloat even in a House of reduced strength.

But if the court, which reserved its judgement on January 16, continues to keep the case on hold, the government, with the backing of 210 MLAs-- of which 152 are from the SP-- should sail through in a House of 403. For, the exit of the Congress and the RLD, with 15 MLAs each, has only reduced Mulayam's majority from 240 to 210; he only needs a majority of 202 to retain his government.