Pre/rave/post/beach: the evolution of the Party scene isn't so straight 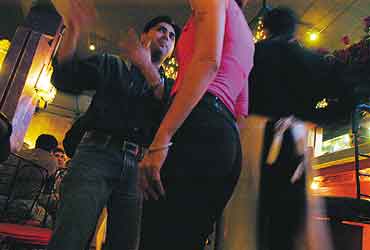 outlookindia.com
-0001-11-30T00:00:00+0553
From dancing at quaint clubs the British left behind to boogieing in those psychedelic discos, Pakistan has come a long way. It even survived Zia’s puritanical regime to now boast of a thriving gay culture. The nation took its first giant leap from the Gymkhanas and the Sind Clubs through Karachi. It was the happening city of the ’60s, hosting cabarets at the Oasis and Penthouse clubs. The likes of the Palace Hotel featured skimpily-clad foreign acts from Turkey.

The ’70s rang in the bellbottoms and redefined values. Pakistan got its first casino on Karachi’s Clifton beach. It sparked a veritable Arab invasion of the city. My dad, an airline pilot, thought Karachi was to become the next Beirut. Live bands such as Attitude played the Rolling Stones, and hipster saris revealed flat bellies. Babs Chinoy was the ‘it’ girl. Horseshoe, 2001 and the Hut were the popular disco joints. There was also the notorious Key Club where couples would leave their keys in a hat and go home with different partners. Shocking!

Then Zia-ul-Haq happened, all through the ’80s. Dupattas suddenly became the woman’s most important accessory; it was a must on every woman’s head on PTV and commercials. I was in high school then. I was allowed to host non-alcoholic parties that began at 9 pm and ended by midnight. I left the country for my university (1983-86). In the five years I stayed away, people rediscovered their footloose and fancy-free ways. Despite Zia, Juliana’s became the rocking disco and Madonna blared at the Sheraton. The "greed is good" contagion of the West entered here. The rich threw lavish parties, showed off their sparkling diamonds, sprawling homes, fancy cars—and, oh yes, their pretty wives.

Ironically, the ’80s also saw the emergence of the music and fashion industry in Pakistan. Models, stylists, photographers, rock stars and designers emerged as a force on the social scene. It was around this time that I started to model. Acceptability and respectability weren’t for us, perceived as we were just a notch above actresses or stewardesses. Conservatives were screaming for a ban on Junoon and Vital Signs concerts. We fought hard for acceptability.

The growing fashion industry brought with it the gay culture. But you couldn’t talk to gays about their preferences, nor could they go public about their inclinations. They revealed themselves only to their own. I remember one Halloween party where my gay friends thrilled me with their antics. One stylist was dressed as a nurse, another as Carmen Miranda; some came in as Benazir Bhutto. The gays of the ’80s married in their quest to merge with the straight. Most of them divorced a decade later.

For five years, I was away in Canada. And when I returned in 2000, the gays of Pakistan had come out of the closet. The first man to admit his preference was my assistant. He was heart-broken: his love had been married off under family pressure. One chaand raat I went out to the busy shopping arcade of Tariq Road and was in hysterics watching those who worked for me making passes at other men.

Today most of my buddies are gay. They are all sensitive, talented, intelligent men who, in contrast to most Pakistani men, notice the dress and perfume I wear. One of them is so gorgeous that it hurts he is not straight. Sadly, they all want kids and families. I have utmost respect for these individuals. As a Pakistani woman you know what it means to be oppressed, to have your freedom to be yourself curbed. And yet, Pakistan has become more tolerant than what it used to be in the past. It’s now cool to be bisexual, as it is to be in touch with your feminine side. Genetics or failed relationships with men has prompted even some women to find solace with members of their own sex.

The party scene too offers a variety. You can go to a boring ball at the Sind Club with your parents, hit a rave, or go to a thirtysomething party where you will hear ’80s music. The raves are held more in Karachi, and the location is not revealed till the last moment. Most rich youngsters do find themselves at pre-parties, bigger pre-parties, the rave, the post and then at the beach in the morning. The Generation Y kids are products of divorced parents and satellite culture. Struggling to find a mix of the east and the west, for them life is a non-stop party.

The author writes on fashion and society for The Friday Times, Lahore.)