Say No To Kissing

The TV ad 'scandal' has brought out old blushes. But just what is wrong with the Indian kiss? 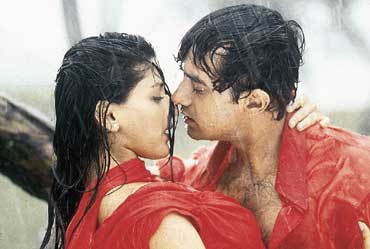 outlookindia.com
-0001-11-30T00:00:00+0553
Sushma Swaraj disapproves of kisses, up close and personal and public. In her born-again Sushma Scissorhands avatar, the honourable I&B minister has been rather busy snipping all kinds of 'impurities' from the small screen. She yelled cut after she saw John Abraham's lips meet Vidisha Pavate's in a toothpaste ad on TV. What is it about a kiss that has the moral police in India frothing at the mouth? Funnily enough, were the minister to turn her gaze to the big screen, there wouldn't be too much snipping to do by way of kisses: Bollywood is rather squeamish about kissing. Simulated sex, pelvic thrusts and graphic violence, however, are all fine—there's as much as you want.

But no kissing please, we are Indian.

It's not the director's cut: stars themselves—with a few exceptions—don't want to kiss on screen. So, Aishwarya Rai refuses to kiss in Josh—it has to be faked. The sweet little kiss between Hrithik Roshan and Preity Zinta in Mission Kashmir ends up on the editing floor: director Vidhu Vinod Chopra didn't think it in character with the rest of his film. And apparently, Shahrukh Khan does not like onscreen encounters of the mouth-to-mouth kind. Thus, the Pepsi ad shows a girl with gaudy orange lips puckering up to kiss Khan as a reward for winning a contest, but the camera suddenly moves to the tree where the kiss has just landed!

The ways of Bollywood are strange indeed. Actress Shilpa Shirodhkar who's done umpteen wet see-through clothes numbers and writhed on screen in the most provocative permutations refuses to lock lips with a male star. Why? "Chi, it's jhoota," she smirks. And she hits the nail on the head: her disgust has to do with oral hygiene as well as the concept of purity. Simply put, the exchange of saliva puts off many Indian stars. "People think kissing is jhoota," explains film director Aruna Raje, adding, "Some are conscious of their breath, they eat elaichi. Actresses are very careful, they wouldn't kiss with the heroes they don't like." And Vinod Chopra is only half-joking when he says actors "don't kiss because they have bad breath". But the real reason, according to him, is the fact that they feel 'awkward' as a kiss comes with lots of cultural baggage attached to it. "It's not like the West where people even kiss openly on streets." Intimacy between the sexes largely remains in purdah in India, and indeed in much of the East.

Kissing onscreen is obviously a worse fate than onscreen death in Hindi movies. "There's a psychological barrier against kissing scenes in the grammar of our cinema," says screenwriter and ad guru Kamlesh Pandey. In the late Basu Bhattacharya's bold film Aastha, Rekha plays a middle-class housewife who earns money on the side for the little luxuries of life by sleeping with men. In one of the 'hot' scenes she nibbles co-star Om Puri's ear and seems to be kissing his toe. But never once do their lips even touch. In Ketan Mehta's Maya Memsaab actress Deepa Sahi (the desi Madame Bovary) appears to be moving her tongue in the vicinity of one of Shahrukh's eyes—apparently something has got into it. But never do their lips meet.

To get round the kiss, Indian filmmakers have come up with the most ingenious solutions: they let songs and nature do it. Imagine the moment when a young couple suddenly discovers they are in love. In most cinemas the two pairs of lips would meet, their eyes shut—often to epiphanic music. Here, it's a cut to fountains spurting, roses opening up, birds chirping. The song replaces a kiss—the lovers either do the song-and-dance routine round the trees, or more recently through tulip fields of Holland or the silver sands of New Zealand beaches. Makes you wonder about the fate of Hindi film music had kisses been routine. Now, bump-and-grind dances which simulate the sexual act and double entendres replace the much-maligned kiss.

It's not that Indians never kissed in the movies. There was certainly a lot of it in the early films, especially in the silent era: Light of Asia, Gautam Buddha and Karma. P.C. Baruah, Himanshu Rai, Devika Rani and Salochana kissed all right. And so did later actors like Ashok Kumar and Najmal Khan. But after independence, kissing became a taboo—even in foreign films—with unintended comedy. Indian audiences had to get used to 'strange jumps'. In their seminal book on Indian cinema, Indian Film, Erik Burnouw and S. Krishnaswamy write: "A shot of lips approaching would be followed by a shot of lips withdrawing." Just as in a drinking sequence "a hand lifting a glass from a table would be abruptly followed by the hand replacing the glass on the table."

Why were the actresses of the '30s and '40s not squeamish? Pandey believes these actresses were not 'representative of the Indian woman'. "Devika Rani was educated abroad and was more like a Western woman," he explains. Salochana's real name was Ruby Meyers, she was Jewish, as were several actresses like Armaleen at that time. There were Parsi heroines like Billimoria and Nadia 'Hunterwali' Wadia wasn't an Indian. These ladies didn't mind the kissing scenes. "They were using the cinema grammar of the West, and the kissing was done mostly in costume dramas (Hatim Tai, Zubeida) and not in realistic, social dramas," adds Pandey. Even then, not all actors were willing kissers. They'd take recourse to a sort of sleight-of-mouth. Shashi Kapoor says his father Prithvi Raj told him many heroes who didn't want to kiss would cheat. "They'd hold the girl and put their thumbs between the two pairs of lips. The audience thought it was a lips-on-lips kiss, but they were actually kissing their own thumbs."

There are other reasons why Indian actors fight shy of locking lips. Many filmmakers are convinced that most Indian actors are bad kissers. Says producer-actor Romesh Sharma: "Some of the actors don't want to be shown up, they don't mind goofing off if it's a fight scene. But if a kissing scene goes off, it's embarrassing, it's an attack on their virility." No wonder most of them look terribly self-conscious while kissing. Pandey believes Shashi Kapoor is just about the only Indian actor who carries off a screen kiss because of his work in Western films. "He's the only one with some kind of know-how and onscreen experience," he says. As for the rest? A thumbs down: "Look at Aamir Khan and Karisma in Raja Hindustani—so pathetic! No emotions, no passion. They seem to be doing it at gunpoint."

Actresses have additional reasons to turn their faces at that dangerous just-before-the-hero-is-going-to-kiss-her moment. Director Aruna Raje, who's made such bold films as Rihaee, believes it's a case of 'false prudishness'. "Many play at being virgins. Perhaps, they don't want to be out of the marriage market." Raje says her actresses ask her to show them how to do a love scene because they do not know much about making love. "They can't appear to be too knowing and don't want the authorship of the act—it has to be the director's concept. This way if they do anything outrageous, they can blame the director." Actresses are also wary about kissing on screen because their parents, husband or boyfriend wouldn't take kindly to it. And the wives of actors don't like their husbands to kiss their leading ladies.

It would seem then that hardly anybody in India really wants the stars to kiss. The kiss was taboo for over two decades after independence—until the Khosla Committee Report in 1969 ruled that "kissing or nudity can't be banned unless a court of law judges it obscene." But even after they were allowed, kisses have been more the exception than the rule. Moreover, many directors cheated: placing the camera behind the actor so that only the back of his head was visible. And Pandey maintains the "first real kiss in contemporary cinema was in Satyam Shivam Sundaram".

In her book Liberty and Licence in Indian Cinema, Aruna Vasudev writes that the sentence about kissing "was singled from the entire report and led to the whole country becoming involved in India's kissing crisis...To kiss or not to kiss became the hot question." Was kissing un-Indian? Vasudev asked then. Well, going by the scissors-happy information minister it would seem so.

(Madhu Jain is with the Friday Corporation)