They bear the brunt of the murderous rage of inter-tribe strife, even as the government dithers on a solution 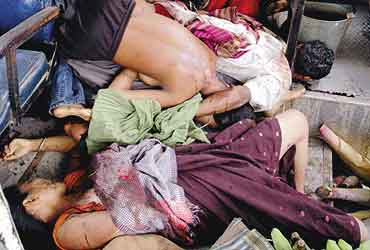 outlookindia.com
-0001-11-30T00:00:00+0553
If Marina Kropi is alive today, it's because of her split-second decision. "I am a Garo," she told the armed men in black, clutching two little girls, Hom Sira and Hunali Tisopi, close to her chest. As the militants waylaid the bus she was travelling in and dragged her fellow passengers out, Marina, 35, had already taken off her pekok, a traditional scarf worn by women of the Karbi tribe. So, she was not in the group of Karbi tribespeople lined up by their would-be killers on the road, hands tied to the back.

Soon, Marina and the two girls would witness the most barbaric scene—humans being chopped to death with machetes, one that could haunt them all their lives. In that single massacre on October 17 near Charchim village, in southern Assam's Karbi Anglong district, 22 passengers, all Karbis, were slaughtered by Dimasa rebels. They then walked away to raid Charchim, a Karbi village, burning homes and killing 15 more. Six more Karbis were found dead a day later at the nearby village of Prseck.

What looked like an isolated incident in which three Dimasa auto drivers were found dead on a roadside near the town of Manza on September 26 turned into full-scale violence between the two tribes that inhabit the district of Karbi Anglong, alongside a sprinkling of other ethnic communities like Garos, Kukis and Bodos. "If the police had acted as desired and got hold of the miscreants responsible for the killing of the three Dimasa youths, there would perhaps have been no revenge attack and things would not have degenerated to this extent," says Holiram Terang, president, Autonomous State Demand Committee (ASDC), a local political party. 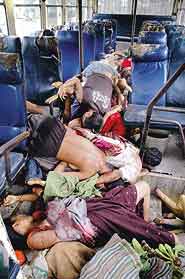 "We won't call it an ethnic battle as there has been hardly any retaliation by the Karbis," Tung-e Nongloda, publicity secretary of the United People's Democratic Solidarity (UPDS), a Karbi militant group, told Outlook over the phone. According to him, between October 4 and October 7, Dimasa villagers were evacuated from vulnerable villages after which the rebel Dima Halam Daoga (DHD) launched its "organised killings". DHD chief Dilip Nunisa, who had shared a room with Nongloda during his college days, denies the charge. "My boys were not behind the massacre of Karbis. It could be plain retaliation by Dimasa villagers or the Black Widow group trying to avenge the killing of the three Dimasa autorickshaw drivers," Nunisa told Outlook from his base in North Cachar Hills, a Dimasa-majority district that adjoins Karbi Anglong. The police have no evidence as yet of the involvement of the rag-tag Black Widow group, a breakaway DHD faction headed by one of the DHD founders, Jewel Garlossa.

Denials notwithstanding, both Assam chief minister Tarun Gogoi and governor Ajai Singh have blamed the DHD and the UPDS of having violated the ground rules of the ceasefire, thereby indicating their involvement in the violence. The UPDS, fighting for self-rule for the Karbis, had entered into a ceasefire with the government on May 23, 2002, while the DHD, promising the Dimasas a separate Dimaraji state, had signed a truce with the authorities on January 1, 2003.

Under the ceasefire rules, the 450 listed DHD cadres and 115 UPDS militants were supposed to stay put at their respective designated camps and not move outside with weapons. Governor Singh visited an UPDS designated camp at Diphu, the district headquarter, on his visit on October 19 and was told that eight of the 10 militants staying there had "gone out" despite the curfew in force. An angry governor then called for the disarming of the rebels belonging to both groups and moved New Delhi with this recommendation. 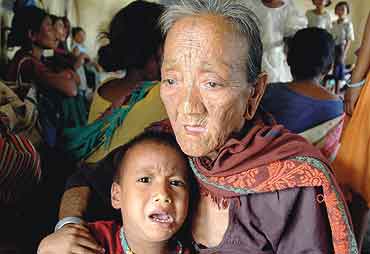 Is there something more to the current bloodshed in Karbi Anglong? Many Karbi leaders feel the DHD was engaged in what they call an "expansionist campaign". Says Terang, "The DHD is fighting for a Dimaraji state comprising all of North Cachar Hills district and parts of Karbi Anglong and Nagaon districts. It is likely that the rebel group is bent on pushing the Karbis out from the Dhunsiri and other areas in Karbi Anglong where Dimasas are a majority." In fact, various Karbi political parties and organisations have been pressing the authorities, even before the violence began, to shift a designated camp of the DHD located in the Dhunsiri area, accusing the Dimasa rebels of moving about with weapons and violating the truce guidelines. DHD chief Nunisa sought to dispel fears. "We are ourselves on the path to peace. Now, in the wake of the current violence, I am prepared to even sit with the UPDS to restore peace in the area."

It is a fact that rebels belonging to both the DHD and the UPDS are getting restive as New Delhi and the Assam government have not really pushed hard on the peace talks so as to arrive at an acceptable solution. DHD chief Nunisa and UPDS spokesman Nongloda agree that their cadres were indeed becoming restless. "It's only natural as the government is not expediting things," says Nunisa. Only three rounds of tripartite talks, involving the UPDS, the Centre and the Assam government have so far been held, the last being on June 14. Similarly, three rounds of such talks have been held with the DHD, the last on June 13.

On October 25, as Karbi and Dimasa leaders belonging to different parties and groups visited the Dhunsiri and Manza areas as part of the district-level peace mission, they were greeted with an ominous silence. "The idea is to bridge the divide between the two communities and convince the people at the relief camps to return to their villages. This is the harvesting season and they must attend to their crops," says Tripathi, the district's young deputy commissioner. But the fear of the midnight knock at their homes atop remote hilltops would keep thousands from returning to their homes, hundreds of which no longer exist as they have been burned down. Recovering in his bed at the Nagaon Civil Hospital, Dilip Ronghang, 20, the helper of the ill-fated bus, who is another lucky survivor, seemed to wonder if his house still stood where it was. It is a question on the minds of many Karbis biding time at the relief camps.

The Wagah Of Words