Unlike other takeovers, the general is trying to save democracy, not kill it 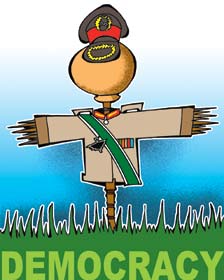 outlookindia.com
-0001-11-30T00:00:00+0553
Just about everyone in the world is shaking his head and saying, "I told you so. Another dictator has shed his sheep's clothing and emerged as the wolf he really is." This one's name is Pervez Musharraf.

Within hours of his government declaring an emergency in Pakistan, as thousands of lawyers and political activists took to the streets in protest, Britain and the United States both criticised Musharraf severely and announced that they would review their aid programmes to Pakistan. The Dutch government had already suspended its aid. Other EU do-gooders are almost certain to follow suit.

Behind these reactions lie not a love of democracy, but a mixture of wilful blindness, racial and moral condescension that may be the greatest peril that the world faces today.

It has barely taken these governments a blink of an eyelid to conclude that Musharraf has declared an emergency because his skin is in danger. They feel no need to study the choices that Musharraf faced; no need to compare the circumstances of the current declaration of emergency with past such declarations in Pakistan. It is sufficient to remember that power corrupts, and absolute power corrupts (Third World dictators in particular) absolutely.

This kneejerk hubris is the greatest obstacle to understanding what Musharraf is facing, and what he is trying to do. Every previous military takeover, with the exception of General Ayub's in 1958, had seen the military form a coalition with the mullahs to pull down the democratic parties. This tacit alliance became overt after General Zia-ul-Haq seized power and turned Pakistan into an Islamic state. So strong did it prove to be that it endured through two more successful assaults on democracy in the eighties and nineties when Benazir Bhutto and Nawaz Sharif were ousted from power in successive coups d'etat.

This 'Emergency' is as different from previous military takeovers as chalk from cheese. It has been declared not to cement the alliance with the mullahs but to enable the state to fight them. Since July 15, Pakistan has been in the grip of a civil war. It is facing an uprising of fanatical Islamist elements in the Northwest that has already taken 2,514 lives this year. Of these, 1,800 have died in just 103 days since July 15, when the Taliban formally resiled from the Miranshah agreement of September 5, 2006, and Ayman al-Zawahiri put a price on Musharraf's head. Of these, almost 600 have been soldiers and members of the Pakistan Frontier Constabulary. That is a rate of killing in a low intensity conflict that the Indian armed forces have never had to face.

But what is far worse, this civil war is spreading at disconcerting speed from Waziristan and the tribal border belt to settled areas such as Swat, Malakand, Upper Dir and parts of the North West Frontier Province. Militarised mullahs are raising their heads in more and more places, boasting private armies, swearing to wreak vengeance on Musharraf, and thumbing their noses at civilian authority. Musharraf is trying to fight this metastasis of fanaticism, but he is doing so with one hand tied behind his back.

The origins of this civil war lie in Pakistan's involvement in the US' unending, goal-less war in Afghanistan, the rising death toll among civilians and increasingly the US (and increasingly Pakistan) army's remote-control method of fighting the war—a method that does not distinguish between combatants and civilians. The anger this has been generating among young Pakistanis has turned anyone who is prepared to speak out against the killings into a hero. This is being taken advantage of by a new brand of fanatical maulvis, who make the Jamaat-e-Islami look like moderates.

Musharraf may not be doing a very good job of it, but the fight he is fighting, therefore, is not to kill democracy but to save it. For democracy can only flourish when there is a strong civil society upon which its institutions can rely on for support and replenishment. That society has been struggling to be born in Pakistan ever since independence. It has always been distrusted by the military and frequently suppressed. But today the military is on its side. For, the rise of the mullahs will snuff out civil society altogether, and wipe out the preconditions for a return to democracy.

Only a very strong state can fight such a powerful threat. It is only the Indian government which has taken the statesmanlike position of emphasising the need for stability in Pakistan. This is because it is one of the few governments in the world that understands the crisis that the Pakistani state is facing.