Saved from the beggar mafia, streetchildren get a new life in Kerala 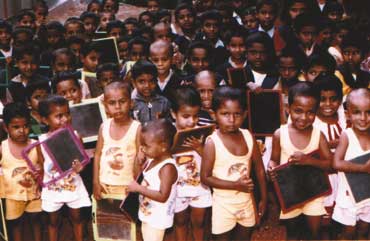 Leela Menon December 23, 2002 00:00 IST Saved from the beggar mafia, streetchildren get a new life in Kerala

outlookindia.com
-0001-11-30T00:00:00+0553
There are little children everywhere, some crawling, others playing, crying, laughing, singing. Looking at them, it’s difficult to believe they had all been abandoned—and were picked up from the streets or saved from a mentally ill mother. Some were even kidnap victims.

Like three-year-old Manjumatha, found lying on the road near Angamaly, her legs oozing pus from the acid burns inflicted by her beggar father. Some headload workers brought her to Jose Maveli’s Janaseva Sisu Bhavan off Aluva, near Kochi. Today she is a smart four-year-old smiling at you though she still hasn’t started talking, probably a hangover of her childhood trauma.

The children at Sisu Bhavan are all castaways or kidnap victims of the ‘beggar mafia’. Increasingly, all over Kerala there have been kidnaps of this sort with the victims put out to beg, sometimes even being maimed to attract sympathy, a la Manju. The children are given specific routes and target amounts, to be collected from buses, trains and pedestrians. They are also given cards to be distributed in train where they sing and collect cash—"collections" can go up to Rs 300 a day. The gangs torture the kids if they fail to bring in enough money everyday. Some of the little ones have had their nails or hair pulled out.

Jose has been rescuing such children for the past seven years. Started with just one child, Mallika—rescued from a mentally ill mother—the Sisu Bhavan today has over 200 children. Children are brought by destitute parents or mothers too poor or ill to care for them. "There was this blind man who had seven children, all surviving by begging. They left three of their children with me," Jose recalls. A number of children are from broken homes, the fathers mostly alcoholics.

The atmosphere at Sisu Bhavan resonates with the laughter of children playing chase or some coming out fresh from the bath. There are 30 "mothers" to look after them, bathe and feed them. Jose routinely picks up beggar children from the streets. "But as soon as I rescue a child someone belonging to the mafia will come masquerading as a father and claim the child. Leaving me no option but to surrender him or her," Jose regrets.

He rescued three such children from the streets—Susheela, Sujatha and Krishnan who were begging at a bus stand. When the usual request came from a man who claimed to be the father, Jose refused to give them back but they came in strength producing documents from their school and alleging that they had run away. The children were returned.

Later, after a newspaper reported the story and published their photos, they were identified at Vadakkancherry town where they were still going around begging. Jose rushed there and brought the children back, without Krishnan. The mafia repeated the tactic, forcing Jose to go court, seeking a ban on the begging of children. He has now filed a public interest litigation in the high court, demanding a ban on child labour and begging. "The number of children reaching Kerala from Tamil Nadu, Andhra Pradesh and Karnataka are on the increase. These three children are from Karnataka. The kids are made to beg when they are small, then the girls are sold into prostitution and the boys made drug pushers. Rules exist banning begging but they are not implemented," Jose points out, adding this constitutes a blatant denial of the fundamental rights of the child to education and freedom.

The Sisu Bhavan provides the children with shelter and also ensures their dietary requirements—meals include milk, ghee and pulses. The kids also have toys to play with, and the older ones are sent to kindergarten and school. Around 60 children were initiated into the world of letters last Vijayadasami Day. The Bhavan is apolitical and "secular", with children from all religions finding equal care.

The Sisu Bhavan is yet to get sponsorship for children a la sos villages, even though they are more in number here and are at a more tender age. A case in point is Miku, the son of a jawan from Mizoram who died in battle. He was brought by a friend of the soldier to Sisu Bhavan. Jose’s efforts—unlike other orphanages, the dumping yard variety aplenty in Kerala—have been to rescue children from the streets. For more details, contact Janaseva Sisu Bhavan, near U.C. College, P.B. No. 107, Aluva, Kerala. Ph: 603379, 621568. Email: janasevachildhome@rediffmail.com