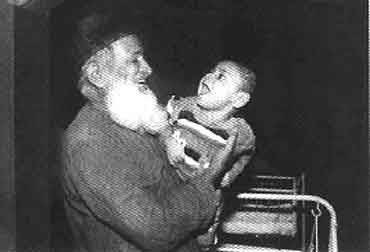 I came to Karachi on September 6, 1947, from Bantwa, Junagarh, with my family, some money and a dream. That one day I would establish a welfare state in the country I had adopted. I was 18. It was difficult to leave India, the land of opportunity, with its rich historical tapestry. Fifty years down the line, after thousands lost their lives in the struggle to get an Islamic welfare state, our achievements are abysmal. And if things continue the way they are, there is every possibility that in the next 50 years Pakistan will be eliminated from the world map. Pakistan's 'Father Teresa'? Well, some of my friends used to call me Sheikh Chilli. Now they send me donations. I have been working for the poor and destitute for as long as I can remember in Mithadar, a locality in strife-torn Karachi. Victims of ethnic warfare, abandoned children, deserted women, drug addicts, lunatics--all find a place in my homes. It was my dream to do something for the poor and needy. I initially began work as a commission agent with my father and earned a pittance, But things really changed after my mother's death. She was paralysed. We had no money, no medicines and she died almost unattended. That prompted me to start a welfare organisation and I am sure that even if the politicians fail, I will be able to convert this country into a welfare state in future. What do I feel about Pakistan? Angry, disillusioned with the state of affairs--the poverty, illiteracy the division on ethnic and sectarian lines. But at 68, I still have a hope that the poor will initiate a revolution and evolve a system based on humanitarianism alone. Fifty years ago, many great leaders, including Maulana Azad and Khan Abdul Ghaffar Khan, were opposed to Partition, the idea of Pakistan. But it happened, uprooting millions. Now half of it is already gone, and if a welfare system is not introduced, the rest will also be history very soon. It augurs well for us that Nawaz Sharif is taking measures to improve the law and order situation and make peace with India. But what we truly need is a Khomeini perhaps. Though it is also true that democracy is important for the country's survival. Alas, this is something Pakistan lacks.