The acclaimed artist on his recent exhibition, Metamorphosis at the Lalit Kala Akademi 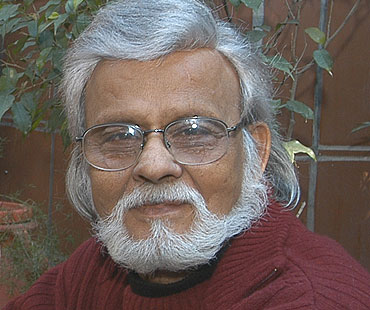 You’ve been a sculptor, architect and painter; what drives you in your art?
When you are forced to live in a silent world, as my deafness has forced me to do, there is a certain need to find proof of yourself, and my work is the ultimate proof of my existence.

You’ve taken six years for your new series, why is that?
I have never exhibited frequently. Only when I have been inspired by something, and have something original to show, do I like to have shows, so it is natural for me to take such a time.

The new work has a totally new style, why is it that you choose so many different styles?
Normally an artist has a style and that becomes his identity, but this style can only be stretched to a degree, afterwards it gives out and becomes stale. When I begin creating it is still fresh, like exhaling a breath. If you start breathing it back in, it is stale air.

Your current exhibit plays with the idea of horses and bulls, and is shown through riding gear, what is the symbolism behind this?
The animal is a symbol of energy, whereas the riding gear, the way it is let loose, is about the energy in motion, something I need since I have been trapped into stillness.

Where do you find your inspiration?
From observation. In the current series I was inspired by the twisting of leather, the pent-up power in it, how the wringing symbolised tension and energy.

After a major series like this one, do you feel contented or inspired for further work?
It’s like taking a deep breath, and then you exhale. But that doesn’t mean that you don’t need to take another breath soon.

Do you believe that modern art is well understood and accepted in India, such as MF Husain’s work?
No society, whether in India or anywhere else, has ever accepted anything that differs from their point of view. They like to see what they have always seen, and anything that challenges their known views is not accepted, while the whole point of modern art is to test those boundaries.

Do you see this testing of boundaries among the new generation of artists?
Very much so. I admire them. Never before have I seen so many original artists. Whereas previously there was very little experimentation, now it is the hallmark of the new artists, and perhaps the growth in the economy is also responsible for this new attitude.

You were born in undivided Punjab, before Partition, do you think there is a regional identity to art?
One thing that never ceases to exist is the regional root. A seed planted in different soil tastes different. Any art that denies that is rootless.

What have you carried with you from those childhood roots?
Urdu poetry matters a great deal for me, and to me it is like the music that I cannot hear. Iqbal’s verses have been a particular pleasure, and Faiz Ahmed Faiz was a personal friend whose verses I read before they were even published, and I began my autobiography with one of his verses.

Slighted edited version of this appears in print

Hope And Mourning In Merseyside