On his friend Frida Kahlo, the Mexican painter with whom he became very close in the last six months of her life, and Salma Hayek, who plays her in the Oscar-nominated film, Frida 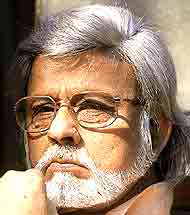 Was she really bisexual?
There were rumours of her being trans-sexual, but I have no first-hand knowledge of it.

What did you talk about with her?
In the beginning, she wanted to talk about the Hindu concept of life, its philosophy of existence.

You enjoyed such discussions with her?
I admitted my ignorance. I was a Marxist then, and had read nothing that wasn't in line with it.

What then did you talk about?
We talked about India's freedom struggle and Gandhi's influence on the Indian masses. We also talked about the maladies we both suffered from.

Did sexual politics contribute to her work?
Three things contributed to her work: sex, politics and the wasting of the human body of which she was a victim.

Did she ever want to come to India?
I never heard any such wish from Frida.

How did she look at India?
Frida wanted to be cremated, not buried. She may also have an incarnation in India.

Is there an Indian equivalent to Frida?
In terms of behaviour and temperament, Amrita Shergil may have inherited some of Frida's characteristics, especially in matters of sex.