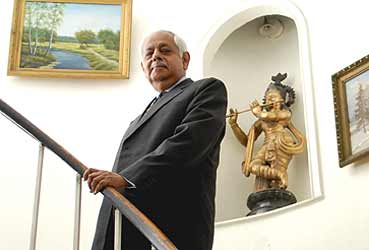 Satinder Lambah is one of the most self-effacing diplomats to walk the corridors of power, a man whose quiet skills have been valued by every government. As ambassador to Moscow, he had only three months of service left when Chokila Iyer became the country’s first woman foreign secretary. But the Vajpayee government made him special envoy to Afghanistan as soon as he retired, to lead the campaign for Indian influence in that part of the world. Before that, he chaired a committee on reorganising Indian diplomatic missions abroad, and his recommendations have been implemented.

He has served as the convenor of the National Security Advisory Board as well. Now he is special envoy in the PMO. It is, whisper sources, a front for backchannel links with Pakistan, where he was born in 1941, in Peshawar. In a marked departure from usual Pakistani practice, the day after he presented his credentials as Indian high commissioner, then PM Nawaz Sharif threw a lunch for Lambah. When he demitted office three years later, Benazir Bhutto, Sharif’s successor, also did him this rare honour—testimony to his remarkable ability to win friends in our neighbour country. One of the factors in the present stability in Indo-Pakistan ties, despite the occasional bombing, can be attributed to Lambah regularly meeting his Pakistani interlocutors to develop a mature menu for engagement.