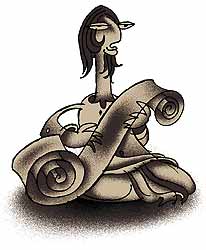 outlookindia.com
-0001-11-30T00:00:00+05:53
Am I an Indian? Being a middle-aged Parsi gay Bombay-born US-returned academic teaching English in Hyderabad? I was recently in Australia. I felt ill at ease there. No one seemed to belong to the place—imports from Italy, Syria, Greece, the UK, and of course, the US. Miles of shopping malls: So many malls, so little money! Miles of broad highways, very little traffic: The night of the living dead! The result: A second-class America, the second best country in the world.

At home in India, well, I'm at home. I haggle, I hustle and bustle. I jostle. I speak in Urdu. I write about Hyderabad. Poets and artists invite me into their homes. Students love me, send me guru-dakshinas, shower me with guru-bhakti. In Australia, my own sister would not open her Sydney home to me. She paid my hotel accommodation and gifted me $40. Well, she had done what any good Westerner would do. My Indian sensibilities were hurt—I left Australia without sightseeing in Sydney.

A Fijian academic in Canberra would call out: "Kaise ho mere dost? Mazey mein ho?" Meri dosti, mera mazaa—well, that's Indian plus the hard work put in to make a name in Australia. Sights and smells and sounds of Hyderabad beckon me home, permeate my dreams, my poems. Poetry is Indian. When a Delhi publisher returned my mss unopened, I admonished them: "This is the land of Ghalib. At least write me a rejection note." They did.

But it is Indian to work without hope of reward. I left America. There, I was a "foreign fairy". My gentle American teacher blessed me: "You are an Indian at heart, beneath your western veneer." I gave up a Parsi papa's inheritance because poetry and sacrifice go together, not poetry and riches. To this day, I refuse to worship Lakshmi. I must be the only poet in the world with "Merchant" for a last name.

At the beginning of my career, Mulk Raj Anand sagely suggested I write under my first name "Hoshang" which in the Persian epic means "son". Well, it sounds ironic to name a Parsi gay child "son". But then, we're all misnamed. Is every "Ram" a hero, every Sita a "sati"? But my mother put her foot down when father wished to send us to a convent. "My children will learn Gujarati before they learn English," mother, herself a Gujarati graduate, said. My American sister, an anthropologist, wrote about her Bombay Parsi girlhood, sitting in the Chicago snows.

In White society I passed for White but my soul was brown. "If I dream in English it is equally true that I curse in Gujarati," I've written in my autobiography. ("Kutri" being a favourite.) Sar pe lal topi Rusi phir bhi dil hai Hindustani.

I grew up on Pali Hill. Raj Kapoor shot the Anari theme-song before our 26, Pali Hill gate. Meena Kumari visited Achala Sachdev, our neighbour. When Achala moved, the '60s starlet Kalpana sub-let from her. I was a growing up gay at 16 and would imitate Kalpana's walk, voice and come-hither screen-looks to perfection before a mirror. I learnt how to glide from Meena Kumari. Sadhana would let loose her poms on me if I stared too long at her through her open gate while returning from school. Nargis could be seen shopping like any housewife at Kemp's Corner.

Even today, I'm proud to say, I sacrifice all in love like the heroines of the '50s Hindi movies. My mother wept like Meena. Of course, Meena wept, lived and died best like Meena, the masochist par excellence.

Today Hyderabad painters ask me to sit for them. Laxman Goud draws me strangely mutilated—without an eye, or an arm or a phallus, a Parsi ferishta in the Paradise of the Gandu Bagicha. Later, he drew me (goosing my kite-flying neighbour's boy) in my Hyderabadi lungi worn under an American T-shirt. Nicola Duravasala, herself a British woman married to a Telugu-speaking man, sketches me in profile holding a flower like Shah Jehan complete with greying pony-tail.

Is that Indian? Was the Great Moghul Indian? Is the Taj an Indian or a Persian building?

You bet we're all Indian. In a word, hybrid. "Naam nahin to badnaam to huey," Ghalib writes. Yes, I did not write for fame, I wrote for infamy. I'm India's first openly gay poet and I thank America for teaching me to deconstruct gender, and I thank Hyderabad University for giving me refuge in a truly Indian spirit.

Pardeh mein rahney do, purdah na uthaao? I was hurt that India's gay contribution was not acknowledged during India's 50th anniversary. I'm a midnight's child. My gift to India was my gay anthology Yaraana (Delhi: Penguin), with Indian poets in it, many of them Parsis.

What have our Parsi mothers "not" done for us? What has Mother India not done for me!

(Hoshang Merchant is a poet who teaches at the University of Hyderabad and is the editor of Yaarana: Gay Writings from India, 1999.)