Home  »  Magazine  »  National  » Cover Stories  » Cover Story »  'After He Has Gone, We Have Only Him To Talk About': Major Sandeep Unnikrishnan's Parents

'After He Has Gone, We Have Only Him To Talk About': Major Sandeep Unnikrishnan's Parents 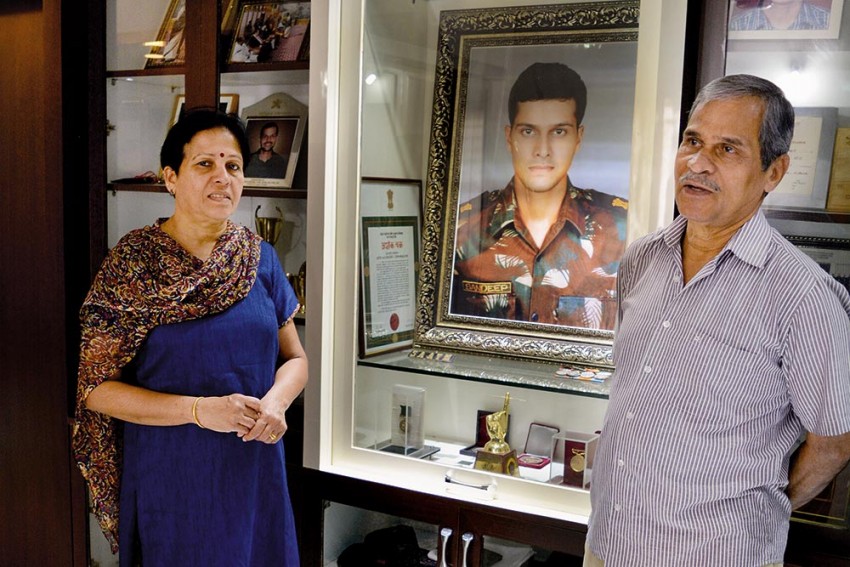 Photograph by Ajay Sukumaran
Ajay Sukumaran November 15, 2018 00:00 IST 'After He Has Gone, We Have Only Him To Talk About': Major Sandeep Unnikrishnan's Parents 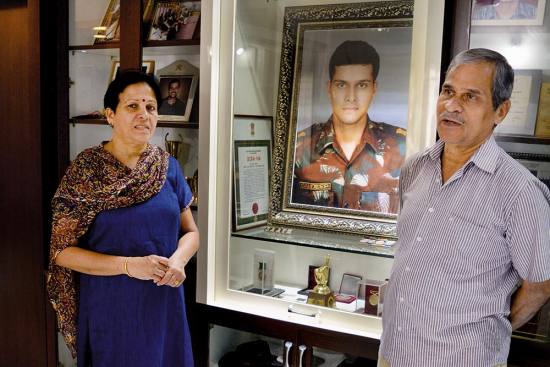 The suburban housing layout in Bangalore into which the Unnikrishnans moved in around 2006 is a quiet, vacant locality. They had built the house after K. Unnikrishnan, who worked with ISRO, retired. “We loved it here. We were happy till 2008,” says his wife C. Dhanalakshmi, 66. That’s when life took a turn. Over these 10 years, Major Sandeep Unnikrishnan’s parents have grown used to spending a large part of their time travelling to events or meeting people. A few months ago, they were in Kerala to speak at a school, despite Dhanalakshmi’s nagging backache. “I will go and speak as long as my health permits,” she says. She has so much to share with people about her son. “After he has gone, we have only him to talk about.”

Upstairs in their two-storey home is a gallery, a labour of love for their son. “He would keep his things very carefully. So we were wondering what to do with them. And that’s how we created this,” she says. There’s an astonishing collection of personal articles and memories, painstakingly put together four years ago. A harmonica, a nursery-class gift from his father which Sandeep treasured; the first cup he won in a school sports tournament and several other accolades that followed; his clothes and shoes, all neatly pressed and polished, in a glass wardrobe; the Ashok Chakra medal and citation; the bag with a change of clothes that he carried into Operation Black Tornado and his entire kit; the dirt from the spot he fell, at the Taj Mahal Palace Hotel, which the family visits every anniversary (a sofa from the room is now at the NSG’s headquarters in Manesar); the Indian flag his body was wreathed in.

On another side of the room, a glimpse of the personal side of a man dedicated to his profession—His 1999-model music system, an old point-and-shoot camera, his small collection of movies, among them Akira Kurosawa’s Seven Samurai. He had told mom to keep the CDs safe, and so she did. There are other mementos: the towel she wrapped her four-month-old baby in when the family moved to Bangalore in 1977; a T-shirt the one-year-old had worn. It is still work in progress, she says. There are so many more articles to add.

Every year on Sandeep’s birthday on March 15, his best friend from school brings a bouquet which his mother keeps alongside his photo until the next birthday. His military colleagues stay in touch and schoolmates, many abroad now, drop in with their kids. “Frankly, if you ask me, why was he so popular? I would say he deserved it,” says Unnikrishnan, who is in his mid-seventies. “Sandeep is living in many minds.” The family lives by the ideals that Sandeep set for himself. “We have learnt a lot from him,” says Unnikrishnan. “I always make sure I dress well,” his wife adds. “That’s how Sandeep liked it.”