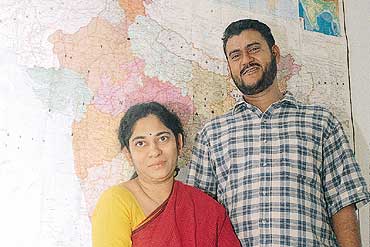 Savitri Choudhury December 24, 2001 00:00 IST Samata fights an exploitative system to give tribals what is rightfully theirs

outlookindia.com
-0001-11-30T00:00:00+0553
After Ravi Rebbapragada finished his post-graduation from the Madras Christian College in 1985, he decided to go back to Chintapalli, a tribal village in Andhra Pradesh’s East Godavari district. Childhood memories were too strong for him to stay away from a place where he grew up with his father who worked for the Indian Forest Service. But the return was not as pleasant as he had imagined. Ravi was horrified by what he found—the picturesque little village of his childhood had vanished to give way to a teeming town. What shocked him even more was the plight of the local tribals—having missed the "development" bus, they were totally marginalised, with not even one of them having found a decent job.

The 22-year-old graduate in rural management decided to temporarily call off his job search and chose to stay back in Chintapalli to help the tribals fight for a better life. He began by helping them write applications, fill up forms and basically deal with all kinds of paperwork—whether it was land transactions, a child’s school admission or assistance for admitting a relative to hospital, Ravi lent a helping hand to the tribals. His mission gradually grew from such humble beginnings, and today, 16 years later, he still hasn’t revived that aborted job hunt. Ravi met his would-be wife, K. Bhanumati, when she came to work with the tribals in the area through the Girijan Cooperative Corporation, after her graduation form the Tata Institute of Social Sciences in 1991. Says Bhanumati: "In the beginning I went there to see if I could actually live in a remote village where even the most basic amenities are a rare luxury." But she did survive the test and today the couple runs Samata, an advocacy group fighting to safeguard the rights of the tribals.

"The culture of the tribal people is such that they are normally not equipped to fight for what is rightfully theirs," says Ravi. Today, Samata boasts of having touched the lives of hundreds of tribals in about 350 villages spread across Andhra Pradesh’s East Godavari and Vishakapatnam districts—it runs regular health camps and trains local women on basic health and hygiene issues, it has started several small schools, and Samata has improved drinking water facilities in the area by laying out a network of bamboo pipes which connect all these villages to natural springs either deeper in the jungle or higher up in the mountains. It is also organising the tribals to resist exploitation and making them aware of their rights. On the economic front, Samata supports sustainable development to help the tribal and rural youth find employment within their own local environments.

Samata has also helped set up a micro-hydel project in an interior tribal area to serve as a model for alternative energy generation. The 13-kilowatt project generates enough power during the day to run a small mill, a grinder and an oil press, and in the evenings it lights up the entire village between 6 pm and 10 pm. Says Ravi: "We realised that if we wait for the government to bring power to the area, this generation will probably never have electricity."

Ravi and Bhanu have also taken on the powerful mining lobby and moved the highest court in the country to stop non-tribals from mining in tribal areas. This 1997 landmark Supreme Court ruling in their favour, now better known as the "Samata Judgement", is now being used all over the country to fight against the encroachment on tribal lands by mining companies. "We just stumbled upon this issue when we discovered that 17 mining leases had been given out to various companies in the tribal belt around the Borra Caves," says Ravi.

Understandably, Samata’s work has also earned it some powerful enemies in the region. Hounded by the People’s War Group, Ravi and Bhanu were forced to go underground for two years in 1997. The couple say the Naxalites felt threatened by their grassroots activity and feared it was diluting their own influence over the people in these backward areas.

The conflict with the pwg forced them to leave the village they had been living in and they have now relocated to Hyderabad to avoid any conflict with the armed guerrillas. However, this has not deterred the 150-odd tribal youths employed by Samata from implementing their community reach programme.

Though Ravi and Bhanu still dream of going back to start their life afresh in the villages some time soon, they are making use of their time in Hyderabad by networking with other groups across the country engaged in a similar fight for tribal rights and lands. "We try and share our knowledge and expertise with them to help them better coordinate their own campaigns," says Ravi. The couple can be contacted at: Samata, Plot No 1249/A, Road 62, Jubilee Hills, Hyderabad-500033; Tel: 040-3542975 & 6505974; e-mail: samatha@satyam.net.in

It Isn't Easy, Breaking The Diet