It was established as the Madinat al-Salam or the city of peace. Today, this lap of luxury and capital of riches lies devastated. 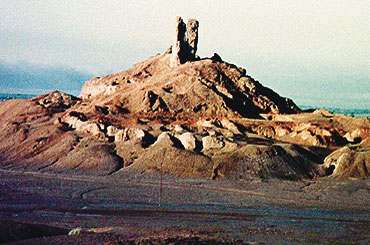 outlookindia.com
-0001-11-30T00:00:00+0553
I've never been to Baghdad, nor have most Egyptians and Arabs of my generation. And yet as we watched Baghdad turn into raging fireballs, and plumes of smoke rose to the sky in silent lament, these TV images were shards in our hearts, twisting and turning inside. Why should I hurt deeply for a city I have never visited? You can't understand, and those who bombed Baghdad won't ever either: what they ripped out were not simply bricks and mortar; they tore away at a heritage, at memories, and, more importantly, at dreams unfulfilled.

Something of Baghdad lives in every Arab.

Following the first Islamic revolution that catapulted them to power in AD 750, the Abbasids decided to move the centre of the Arab Muslim state to Iraq. Not only was it closer to their

power base in Khurasan (now in Iran), but the land between the two rivers, the Tigris and the Euphrates, was rich in agriculture and natural resources. This land was the cradle of Mesopotamian civilisation, renowned for its glorious achievements such as the Hanging Gardens of Babylon, one of the seven wonders of the world, which was built by King Nebuchadnezzar (604-562 BC) to cheer up his homesick wife. Contemporary accounts say the gardens consisted of vaulted terraces one above the other, resting upon cubed pillars. The ascent from one terrace to the next was through stairs. Special water-wheels were constructed to raise water from the Euphrates to the gardens which, if indeed true, testify to the technical advancement of Babylon. No wonder, Herodotus wrote, "Babylon surpasses in splendour any city in the known world." The Arabs incorporated much of what they inherited from Mesopotamian traditions into their administration, bureaucracy, economy, culture, art and architecture.

When the Abbasid caliph Al-Mansur established—and built—Baghdad as his capital in the eighth century, he called it Madinat al-Salam, the city of peace, an obvious reference to paradise. In its heyday, Baghdad was the biggest city in the world. Its outlook was cosmopolitan, attracting talent from around the globe.

What do we think of when we now hear the word Baghdad? Images of the bombing, of TV anchormen stranded on rooftops pointing to shooting stars of light in the sky.

And then we remember.

The city on the Tigris is almost mythical in Arab imagination. State patronage, especially under Abbasid caliphs such as Harun Al-Rashid or his son Al-Maamun, turned the city into an intellectual and cultural hub of the Arab Muslim world. This isn't surprising. For, the invention of writing, around 3300 bce (Before Common Era), was itself a Mesopotamian achievement. The Epic of Gilgamesh (2000 BC), the oldest story in the world, goes back to Sumerian times. Theology too was a Mesopotamian development. And the tradition of "Arab science" is in essence a Baghdadi project.

You say Baghdad and we remember its scientific pursuits. Scientists from around the world made Baghdad their home and, in institutions such as Dar al-Hikma, embarked on their scientific pursuits. Many of these scholars were not Arabs, a lot not even Muslim, but in Arabic and in Baghdad, they started out from the basis of all given knowledge at the time and scaled new heights. And those Arab scientists, like Hunayn Ibn Ishaq, did not simply translate the knowledge of Greeks, Indians and Persians into Arabic (from which language a lot was subsequently translated into Latin), they added to, modified and enriched this corpus of knowledge: in mathematics, medicine, astronomy, philosophy. Famously, the numerals used today in most of the world are Arabic by birth.

In Baghdad, too, a lot of the corpus of Muslim scholarship was developed. Scholars of different Muslim religious sciences such as Quranic exegesis, jurisprudence and Prophetic hadith (sayings of the Prophet Muhammad) flourished in the city's mosques and madrassas.That the main Sunni Muslim legal schools were established and flourished there is no surprise, especially given Mesopotamia's legal tradition embodied in the famous Hammurabi code of laws. Sufism also flourished in the city and many a Sufi poet lived in Baghdad.

This tradition continued into the 20th century: Baghdad University succeeded medieval madrassas such as Al-Mustansiriyya and Al-Nizamiyya as a centre of learning in the Arab world. Politics aside, it's testimony to Iraq's scientific base that it managed to build a nuclear power reactor with French help, though Israel bombed it in 1981. Long years of war and sanctions have, alas, eroded that modern scientific base.

You say Baghdad and I hear poetry. Arabic poetry is predominantly Iraqi—from Abu Nuwas (d.815) and Al-Mutannabi (d.965) to Badr Shaker Al-Sayyab (d.1964), Al-Jawahiri (d.1998) and Saadi Youssef (b.1943). Baghdad had its rebel poets too, weaving verses against authority or tradition or both. In continuation of this tradition, many of Iraq's modern poets ended up in exile. In his poem Unshudat Al-Matar (Song of the Rain), one of the greatest modern Arabic poems, Al-Sayyab cries for his homeland: "Iraq, Iraq, nothing except Iraq."

Classical Baghdad survives in modern Arab imagination as a city of luxury. Abbasid caliphs had a passion for architecture, and they built several palaces, totalling a grand 23 at the end of the eighth century. It's this idyllic image of the city that survives from stories such as those in The Thousand and One Nights: "This is the famous city of Baghdad, the home of sweetness! She lies beyond the assaults of winter, sleeping in the shade of her roses in an eternal Spring, with flowers and gardens and the murmur of many streams."

You say Baghdad and we think of palaces overlooking canals, cool shady gardens, fountains and banquets. The geographer Al-Muqadassi wrote in the 10th century: "Baghdad, in the heart of Islam, is the city of well-being; in it are the talents of which men speak, and elegance and courtesy. Its winds are balmy and its science penetrating. In it are to be found the best of everything and all that is beautiful. From it comes everything worthy of consideration, and every elegance is drawn towards it. All hearts belong to it, and all wars are against it."

You say Baghdad and we invariably remember the Mongols. It is perhaps telling that what survives most about the Mongols in the historical consciousness of modern Arabs is the fall of Baghdad to them in 1258. Even though the Mongols were not one homogeneous political entity, and even though some of their dynasties converted to Islam, and those and others had quite amicable relations with succeeding Muslim regimes, what remains of the Mongols in our memory is that they sacked Baghdad. Every Arab knows the story of how brutal the invading Mongols were: they beheaded all the males of the Abbasid family. They sacked, pillaged, burned. And then the real stab: they threw all the books into the Tigris, with their horses crossing the river on the backs and spines of these books. What an image, even though apocryphal! The sheer abundance of books speaks a lot for Baghdad, as also underlining the medieval Arab's definition of barbaric soldiers: those who didn't appreciate books.

The fall of Baghdad in 1258 is a watershed in Arab history. Though the Abbasid caliphate was revived under the Mamluk Sultans in Egypt, the Abbasid dynasty effectively ended in 1258 and with it a period of some glory in classical Islam. It is therefore telling that modern nationalist Iraqi regimes have sought to revive the Abbasid heritage and appropriate it along with its connotations of an Arab renaissance.

In the modern period, Baghdad, indeed Iraq, held out hope for Arabism in general.TV anchormen covering the war even refer to the bombed, raped, shattered city as "the throbbing heart of Arabism". Iraq is the only big Arab state, with clout and history, rich in both water and oil. That coupled with an urbanised, highly-educated population promised a lot. In the 20th century, Baghdad witnessed political movements and currents of every inclination under the sun: Baathists, Communists, Arab nationalists, all competed, violently, for power and for differing versions of an Arab renaissance. And for a moment, a fleeting moment, it seemed as if an imagined age of glory would become real. Arabs from the Gulf to the Atlantic turned to Baghdad in hope, believing it would carry the banner, lead the vanguard, usher in the Arab dream. Alas, their hopes were to be repeatedly deferred. In the end, that political energy turned corrosive and attracted destruction.

In times like these, as Arabs, indeed people worldwide, watch numbed and almost powerless at the cradle of civilisation bend on its knees with smoke blurring its skyline, poetry can be our refuge. In Unshudat Al-Matar (translated by Roger Allen), Badr Shaker Al-Sayyab thought Iraq's future was waiting to blossom:

In every raindrop/A red or yellow flower-bud/Each tear of hungry and naked people,/Each drop spilled from the blood of slaves,/Each is a smile awaiting new lips,/A teat rosy on a babe's mouth/In tomorrow's youthful world, giver of life./Rain, rain, rain,/Iraq will blossom with rain.

(Amina Elbendary is an instructor of Arabic Studies at the American University in Cairo and a staff writer at the Al-Ahram Weekly, Cairo.)