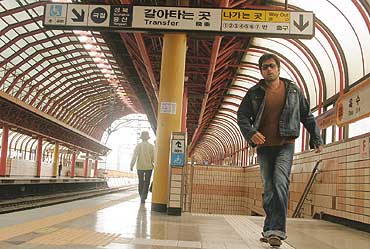 outlookindia.com
-0001-11-30T00:00:00+0553
Well-known Bollywood producer Mukesh Bhatt is on a globe-trotting mission—from Korea, Australia, Dubai to Norway and Canada—and on each of his trips, he feels no less important than a diplomat. Lest you think India is using Bollywood celebrities for back-channel diplomacy, Bhatt is just on a recce to decide the foreign locales for his forthcoming films. And not just him, others of his ilk too encounter a red carpet welcome from foreign governments and their tourism boards. For, having realised the importance of films in Indian society, governments across the world are aggressively trying to put a slice of their country's tourist destinations on the Indian silver screen. They know this will increase the inflow of Indian tourists and hence boost tourism revenues.

Producers like Bhatt are regularly invited by countries like Norway, Sweden, Austria, Malaysia and Korea on all-expenses-paid trips in a bid to convince them to shoot their films there—something akin to what the heads of Chinese provincial governments started doing to attract huge amounts of FDI. At the same time, says Manmohan Desai, chairman, Adlabs Films, "Representatives from over 50 nations come to India regularly to lure producers and directors, offering them incentives."

Jaideep Mukerjee, assistant lecturer at the University of Leicester's Centre for Mass Communication Research, notes in a paper that with over 17 million people watching Indian films every day in theatres and homes worldwide, Bollywood, with annual revenues of over $1 billion, is a force that can compete with Hollywood. He says there is an ongoing battle of undercutting between the tourist sectors in countries like Malaysia, New Zealand, South Africa and Canada to attract Indian producers by offering them tax breaks and cheap access to locations and facilities—all to position their tourist hotspots in Indian films.

The attractions for shooting overseas therefore are growing for Bollywood producers. More interestingly, the foreign tourism boards are even willing to lend money to producers who'll shoot their films in the respective countries. Tourism Malaysia, sources say, extended a $500,000 assistance to the Shahrukh Khan remake of Don, directed by Farhan Akhtar, and shot extensively in Malaysia. In the UK, Leicester MP Patricia Hewitt backed an innovative initiative to start a £37-million fund to finance Indian films featuring Indian and British Asian talent, which would likely be shot in the Leicester region, an area with the largest Indian immigrant population.

Although Indian movies have traditionally patronised locales in Switzerland and the UK for nearly four decades—both these countries have even honoured director Yash Chopra for having done yeoman service to promote tourism there through his films—it's only now that others are realising the positives of reaching out in a structured manner to the increasingly affluent Indian traveller via India's films. "Countries are realising that Indian films shot there are wonderful ad campaigns reaching out to a billion people," says Bhatt. In the same breath, he adds that they are also coming to grips with the fact that wherever Bollywood goes, the Indian and non-resident tourists follow.

Agrees Periasamy Manoharan, director, Tourism Malaysia (India), "When our country is showcased in Bollywood films, not only domestic Indians but Indians in other parts of the globe too are targets. After all, Bollywood is one of the largest and the most influential consumer industries in India," he says. Just to cite a few statistics, outbound travellers from India numbered 7.5 million in 2005, and the figure has shown a compounded annual growth rate of 12 per cent in the past five years. And the figure is only expected to go up.

Expectedly, Tourism Malaysia organises frequent familiarisation trips for Indian producers and directors. The country facilitates a single window clearance for Indian films and even helps directors identify ideal shooting locations. Places owned by the government are rented out free and in case a producer wishes to shoot inside the landmark Petronas Towers (till recently the tallest building in the world), the government coordinates with the company (Petronas) to get it done at nominal rates.

Since such initiatives are backed by the local government, hotels and airlines offer discounts of over 50 per cent to Indian film crews. "We are also looking to finance films, provided they're shot here for longer durations and the scripts depict our country in a positive light," he adds. Malaysia seems to have benefited already from the Bollywood association—tourist inflows from India increased from 1.5 lakh in 2004 to 2.25 lakh the next year. 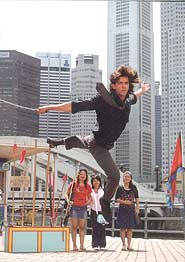 Meanwhile, Hrithik Roshan's runaway hit Kaho Na Pyaar Hai, which was shot in New Zealand, woke up Indian tourists to opportunities in the antipodes. Instantly, tourist inflow to the country grew rapidly from 1,500 a year to 20,000. "It was in 2003 that New Zealand opened its 500 sq ft tourism office in India; now the size has quadrupled," says Jeetendra Chacha, an international film location consultant based in Mumbai. He adds that Bollywood too needs to look for newer locales, as its audience tends to get fatigued with the same old Swiss Alps and the London Clock Tower.

Bhatt's latest film Gangster—shot partly in Korea, a country that's the most recent addition on the Bollywood foreign locale roster—had the support of the Korean Tourism Board (KTB). "The reaction has been tremendous. The songs shot in Korea are a hit and we have had several tourist enquiries in the last couple of months," says Rajeev Nangyal, associate director, Trac, which represents KTB in India. According to Nangyal, countries like Korea which haven't been on Bollywood's radar are also looking at financing options to lure more producers.

Even producers like Bhatt are convinced about shooting in the newer locations as he thinks shooting there is more cost-effective. His forthcoming release, Killer, was shot in Dubai at a cost of Rs 5 crore which, according to him, would have doubled to Rs 10 crore if it was done in India. He's also frustrated with the number of clearances (at least 13 in Mumbai) required to shoot outdoors in India, and the rampant corruption involved in getting them. "What am I getting in India after paying so much? Only bad locations, dirty roads and beaches, and zero government support. So, I have decided not to make films here, and my next 5-6 films will be shot entirely in foreign locations," he asserts. Very soon, Bhatt and others will be in Egypt—for yet another recce and, of course, a royal welcome from its tourism board.

Day Of The Beanstalk