Like going to a typical North Indian wedding banquet with loads on the menu—from golgappas to chowmein. But not one dish catches your fancy and you actually return home hungry. 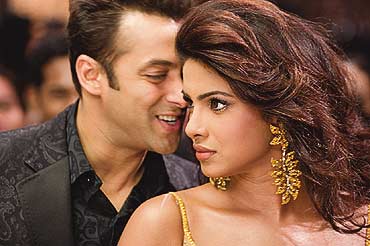 After giving a snazzy twist to the great Indian family sagas in his debut venture, Kal Ho Naa Ho, Nikhil Advani held enough promise for us to expect an entertaining flick if not uplifting cinema. In Salaam-E-Ishq that promise comes undone.

Much like KHNH, Advani decides to go berserk with the narrative here: multiple frames, split screens, quick cuts. And he does more, he chooses to make one film with six tracks, some parallel, others colliding and overlapping. In the process, SEI doesn’t quite come out so neat and clever. The story-telling is terribly self-conscious and weighs too heavy on the film, making it extremely ungainly and boring. In focusing on the style, Advani conveniently forgets...