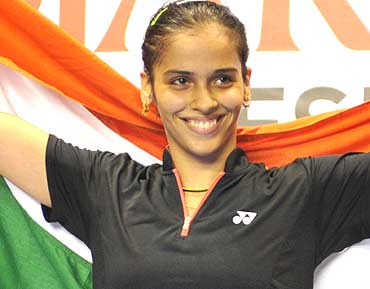 Wow! You beat the Chinese at their game.

I’m still surprised how it all happened. I had lost the first game to Li, and in the second set, we were locked at 17-17. I was nervous, but grit and determination kept me going and I won the set by 19-21. This buoyed my confidence in the third set which was vital for the win.

Was this your best game ever?

I can’t say. However, my most memorable game was in the Olympics QF where I lost.

Both your parents are badminton champions so you must have begun early.

I had been visiting badminton courts with my parents ever since I was an infant. While they were playing, I was made to sleep in the corner for hours. I learnt to handle a racquet at five and by nine I was fully into the game.

You seem to lead a very austere life unlike other teenagers.

I took up badminton like a medical student would take up his or her studies.

To go still further. I never thought I would achieve it so early. In...