Two months after its defeat, the BJP is still unable to chart its path. A brainstorming session recently held in Goa yielded little. Updates 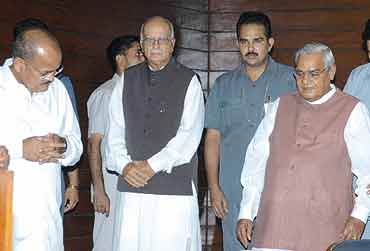 outlookindia.com
-0001-11-30T00:00:00+0553
Had it been a few months ago, BJP leaders would have more than just dipped their feet in the balmy seas of Goa. They would have been gung-ho about the future. And Murli Manohar Joshi most likely would have made no secret of his deep loathing of Venkaiah Naidu. But ever since the BJP's shock defeat, the natural order of the universe as the party knows it has been disturbed. In fact, the netas are behaving strange.

For instance, last weekend 30 leaders landed up in Goa to take part in one of those quaint Sangh parivar traditions called a chintan baithak, which can naughtily translate as "worrying session" but is usually described as introspection. For four consecutive days, so deep were they in thought that there was no time for excursions to the beach.

Fear of the media—which has been picking on the growing five-star culture in the party—was palpable. No resorts this time. Just rooms under Rs 1,000 at the modest Goa International Centre, some distance from the sea. "A short cruise had been planned but was cancelled for fear of media criticism," admits a participant. To make matters worse, there was also a security warning that kept the 'thinkers' far away from sun, sea and sand.

Last time in Goa was like this: 'have a good time folks', the party is in command. The BJP's two grand old men, Vajpayee and Advani, watched the sunset, perhaps with rss watchdog Madan Dass Devi tuned in. Goa 2004 was different. From 9 in the morning to 8 sundown, the core group remained immersed in 'chintan'. "One evening we asked Vijay Kumar Malhotra to sing us a song but he said he had lost his voice," says a participant.

The only bit of entertainment came at the end of the meet when Joshi moved a resolution praising the "dynamic and effective leadership" of Venkaiah Naidu. "Some of us almost fell off our chairs," says a general secretary.

The more politically significant statement was perhaps made by Vajpayee. He felt the BJP's thrust should be on "enlarging the NDA"—ironical, given the recent threats of diminution in the ranks. Insiders say the former PM was pointing to Mulayam's Samajwadi Party. They believe Vajpayee is still nursing the dream of either propping up an SP-led regime or bringing about a realignment of political forces at the Centre with the SP acting as a catalyst. "He's still in denial and has wild hopes of somehow coming back to power before it's too late for him," says a BJP strategist.

Most leaders came away with the feeling that both Vajpayee and Advani are interested in playing toppling games. For, if this government lasts, their moment would have passed. A senior leader says: "The tragedy is that the biggest problem—crisis of leadership and need for change—could not be discussed." Yet, the two did face criticism. The Vajpayee government was accused of abandoning ideology and being "unmindful" of the social groups that supported it. Advani was told that the feelgood slogan was all wrong and that his Bharat Uday Yatra achieved little while it prevented him from paying attention to candidate selection.

More significant was the debate on Hindutva. A decision was taken to delink Hindutva from specific issues like the Ram temple or the uniform civil code. Instead, it tended towards a general hyper-nationalism. Advani reportedly said at the meet: "The Congress will give us ample opportunity to save our constituency as it will indulge in minority appeasement." Clearly, the BJP will seize every opportunity to stir the potent mix of Muslim-terrorism-jingoism.

To a large extent, the preference for the term nationalism instead of Hindutva is in deference to the allies. The Janata Dal (U) and Telugu Desam's statements that they would be forced to part ways with the BJP if it reverted to a hard line appeared to be synchronised, coming as they did on the first day of the chintan baithak. The JD(U) in particular was categorical: "We cannot be with the BJP if it returns to the old agenda." It is another matter that Hindutva did not bother the party or its secular ideology when it tied up with the BJP to be part of the NDA government.

The allies' statements are also a reflection of the political realities in their states. In Andhra Pradesh, for instance, the TDP-BJP alliance was handed a complete rout in the recent elections. Since no party gained from the arrangement, the alliance could break if either gets a better option. The TDP, on its part, has been blaming the complete desertion of the minority vote on the BJP post-Gujarat.

In a way, it's actually the BJP that has been an all-round loser from the arrangement. In 1998, the party had got as much as 18 per cent of the vote in Andhra Pradesh, largely from the Telangana region. At that point, the party supported the demand for a separate Telangana state. What changed the gameplan was partly a tactical decision to go along with what its ally, the TDP, was comfortable with. And partly, Venkaiah's ascendancy. A Kamma from coastal Andhra, he persuaded the high command to jettison the Telangana line. Several BJP leaders from Telangana such as A. Narendra, now with the trs and an MoS at the Centre, quit the party in protest. Meanwhile, the BJP's voteshare began to slide in subsequent elections, with it eventually getting just 8 per cent in 2004. Now a senior satrap says: "There must be a complete rethink of the party's Andhra line."

The plot is a bit different in Bihar. For one, JD(U) leaders like Digvijay Singh cite the BJP's complicity in the Gujarat riots for the en masse desertion of the Muslim votes. "They also went wrong with feelgood and India Shining," says Digvijay.

Yet with the Bihar assembly elections due next February, the BJP and JD(U) have little choice but to stick together to avoid splitting the anti-Laloo vote. But a hard Hindutva line might not work well in the Bihar context where caste splinters any possible Hindu vote. Hence, the JD(U)'s sharp words of warning to the BJP. Moreover, JD(U) leader George Fernandes is the prime mover behind a broad coalition of former socialists. This strategy includes the well-nigh impossibility of Mulayam and Ram Vilas Paswan coming together. Yet Digvijay is hopeful: "We would like Paswan to come but we doubt if he would. For though he has differences with Laloo, he would want to be on what appears to be the winning side at the moment."

With the BJP weakened, even an ideologically compatible ally like the Shiv Sena has been losing no opportunity to cut it down to size. Some years ago, the party had dreamt of emerging as the senior partner in Maharashtra. But with assembly elections round the corner, it's clear that the Shiv Sena is top dog again.

More than anything else, the four days of deliberations in Goa were meant to help the BJP chart a clear course of action. But the breeze from the Arabian Sea did not really clear the cobwebs. The leaders returned with the same vague statements about Hindutva, nationalism, minority appeasement etc. It was the NDA allies' statements that added a dose of realism to the proceedings.

As for the 'worried' leaders, they might have at least been in a happier frame of mind if they'd indulged in some fun and frolic on the beaches of Goa.