Vaghela, who knows a thing or two about Hindutva, injects genuine competition into the polls 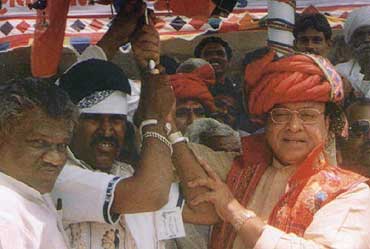 His sheer presence has converted a walkover into a war. A moribund Congress apparatus, so far numbed by a hurricane called Narendra Modi, has become a livewire network. Today, if the BJP in Gujarat has any cause for worry, it is over its own rebel son, Shankersinh Vaghela, who now warms the state Congress chief's seat. It's early days yet, but no one can dispute that he has brought a semblance of direction to a rudderless Congress dispensation. His strategy—a soft Hindutva campaign.

The tone and tenor was set the day he became state Congress president. Demoralised party workers couldn't believe their eyes as Vaghela, from the Ahmedabad railway station, took out a massive procession through Modi's Hindutva citadel, Ahmedabad city. He thundered to a huge crowd, "It is because of Modi that Gujarat's image has been tarnished. He should stop blaming others for what he did." Since then, yet another slogan veers around the Vaghela legend: "Dekho, dekho kaun aaya, Narendra Modi ka baap aaya."

Vaghela's gameplan is clear: meet the BJP head-on and ensure that nothing they do goes unchallenged. His attempt to drive a wedge between the Hindutva forces has already met with some success: several religious leaders have now veered to the opinion that the Hindu religion does not subscribe to violence. It wasn't without reason that a delegation of sadhus met Sonia Gandhi at the Ahmedabad airport during her recent visit. Widely respected Jain muni, Acharya Mahapragya, also gave her an audience at an ashram near Gandhinagar.

Similarly, a convention of sadhus recently hit out at Modi and at the VHP's claims to Hindutva, while a Shankaracharya of the Puri math, Adhoksjanand, camped at a well-known temple in Vaghela's village, has castigated the saffron brigade.

Vaghela's strength is that he knows what 'Hindutva' is all about. First he queered the...