Internal feuds and a grave presidential dilemma ahead Updates 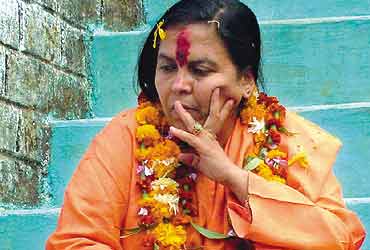 outlookindia.com
-0001-11-30T00:00:00+0553
A political party that banishes Uma Bharati into the wilderness and then contemplates elevating Venkaiah Naidu to the post of president can be accused by its critics of seeing the world upside down. The sanyasin, expelled last week from the primary membership of the BJP, is making the most of her vanvas. She is following the Hindu path of penance for a political rebirth—walking the dirt-roads of Madhya Pradesh in a long march to Ayodhya. One night she sleeps in a dharamshala, the next in a local temple or a tent in a forested area near a village. "I was chosen by the people, so I've gone back to them," she says.

Meanwhile, the 'Venkaiah Naidu for president' tale is perhaps more revealing about the state of the BJP. Venkaiah has gone on record saying it's premature to describe him as a frontrunner for the post of president. "I'm not aspiring for anything and nothing has been decided," he said. Yet Venkaiah can perhaps draw some encouragement from the fact that Pramod Mahajan, who never had much time for him when he was actually BJP president, told a TV journalist: "I have no objection to Venkaiah Naidu as president." At the time of writing, Arun Jaitley, Sushma Swaraj, Rajnath Singh and Murli Manohar Joshi had not yet offered their "thoughts" on the matter.

But the clock is ticking. The final countdown for the party's 25th anniversary celebrations in Mumbai at the end of the year has begun. It will be the last party function where outgoing president L.K. Advani will be in the chair. By then, an unwilling BJP will have to come up with a name for president. Ideally, the BJP should be ready with a new name when the national executive meets on December 26 and 27 and then get it ratified at the national council meeting between December 28 and 30. Many leaders privately disagree with the line that the function should be just a celebration. Says a BJP MP: "If we don't have a replacement for Advani, we will be a laughing stock and the whole session will be overshadowed by speculation. But if we come up with Venkaiah Naidu again, we'll also be a complete national joke." 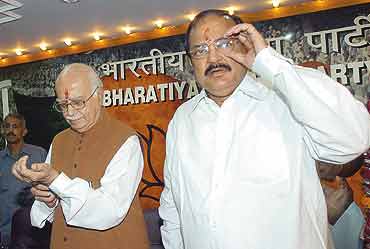 What is certain is that the delegates from across the country who will gather in Mumbai may not take kindly to being told that it's back to good old Venkaiah. Says a member of the national executive: "For those of us who come from the states, image and projection matters a lot. But in Delhi they're only worried about cutting each other to size."

Venkaiah's name is doing the rounds furiously as interim president for a year because he is the least threatening of the other members of the other second rung. The old guard (Vajpayee and Advani) are believed to have a soft corner for Jaswant Singh, but the RSS and many in the BJP believe he's not proactive enough. Meanwhile, Jaitley does not want Pramod, Pramod does not want Jaitley, neither wants Sushma Swaraj or Rajnath Singh in the hot seat, and almost everybody currently holding an organisational post is virulently opposed to M.M. Joshi who is actually the preferred candidate of RSS chief K.S. Sudershan. That is the merry-go-round on which the name of the new president is currently stuck. That's why Venkaiah Naidu has popped up again as the BJP's jack in the box.

A senior RSS functionary elaborates: "The Sangh has been telling the BJP to decide. But they're refusing to do so. That is the reason why Venkaiah's name has gained currency although the RSS is not happy about it." Venkaiah is an amiable and hospitable individual with a penchant for furious activity that often appears purposeless. But by no stretch of imagination can he be seen as the face of a future BJP. Says a national secretary: "Venkaiah cannot be a real candidate. But the irony is, he may still become president."

If the BJP-RSS settle for Venkaiah, they will be leaving the field wide open for the furtive games of one-upmanship. The battle for the "real" president will only be postponed for another year. Yet the choice is indeed a hard one to make, particularly as both Advani and Vajpayee are also in search of an individual who will continue to pander to them. Meanwhile, what the party should really worry about is that while individuals like Kalyan Singh are on the margins of the decision-making process, an Uma Bharati appears to have made it a single-point agenda to establish the difference between a real and a manufactured leader.