In UP, the BJP banks on a ‘second Modi wave’, hoping the demonetisation shake-up will break its 14-year jinx 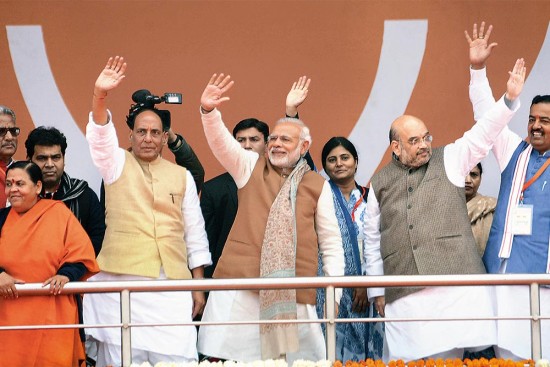 Political discourse in the run-up to Uttar Pradesh ass­embly elections is no more about ­Ayodhya and the Ram temple for the BJP. It has been subtly sidestepped, replaced by snide references to intrigues in the 17th-­century Mughal dynasty, portraying Mulayam Singh Yadav as the emperor Shah Jahan and son Akhilesh as the ambitious ­Aurangzeb.

The Yadav family feud, especially the conspicuous bitterness between father and son, has given the BJP an opportunity to take some sheen off Akhilesh’s “good boy” image by invoking the comparison with Aurangzeb, who had confined his father at Agra Fort in the battle of thrones. While political circles buzz with conspiracy theories about the cause of the rift, the BJP has pulled out all the stops in playing it to the gallery. A unified Samajwadi Party (SP), with Akhilesh firmly at the helm, would be a formidable force for the BJP to contend with. And if the much talked about SP-Congress tie-up happens, the BJP knows it will have something to worry about.