It was a state with a strong anti-north politics. But Karnataka now opens the doors to the south for the BJP—giving a fillip to its 2019 prospects. 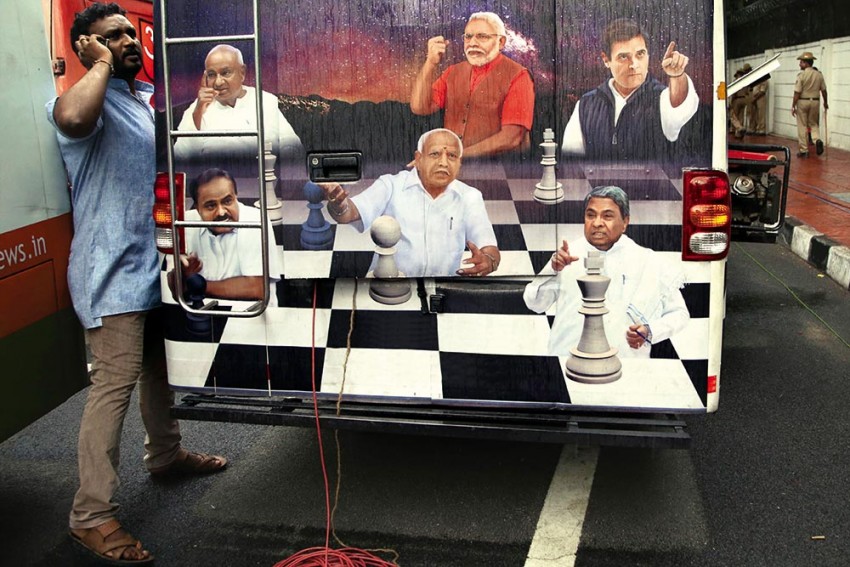 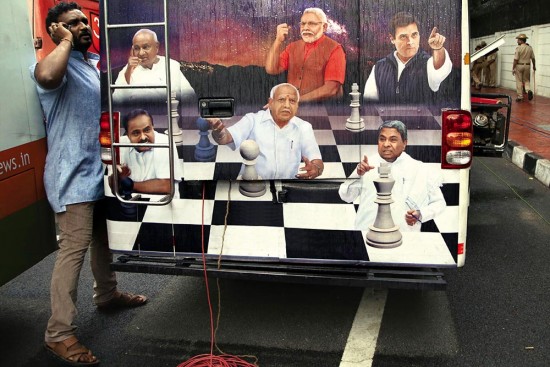 Crossing the Vindhyas. It’s an age-old metaphor, one that has defined India’s power matrix for centuries, and a vital one for the BJP to clinch. Karnataka, after all, was the last major election in the south before the curtains go up for the big one in 2019. Next summer’s general elections—if they do not get preponed—have all the signs of an epoch-making one, and Prime Minister Narendra Modi needed to show he could lead his chariot beyond ‘Arya­varta’. The BJP will need to offset potential losses in the north with a compensatory harvest in new territories—that’s the general consensus. No wonder he was exultant about the red loam soils of this Deccan state getting that glint of saffron.

The dizzying rollercoaster that began with unusually heavy footfalls at the polling booths on Saturday—and carried on well after a T20-like cliffhanger on Tuesday—seemed nowhere close to ending as we go to press. Triumphal tweets were being sent and deleted, MLAs being carted back and forth between Eagleton Golf Resort and the Governor’s bungalow, jokes proliferating on Whatsapp and Twitter, and legal briefs with arcane constitutional points being drafted on both sides.

All this breathless confusion owes to the fact, of course, that the lotus did not bloom in as much profusion as the party czars would have liked. But the precise path the tortuous script takes is immaterial in a sense. What’s key, in the run-up to a Lok Sabha election that looks more open now, is that the BJP has taken one more step to shed the image of a “north Indian party”. What’s more, it did that in a state that had taken a distinctly nativist turn of late, with anti-Hindi sentiments bleeding into its politics.

If the BJP succeeds in taking Karnataka, it will control 21 out of India’s 29 states—some of them with alliance partners. That also brings it that much closer to its ambition of a “Congress-mukt” India—an ideal it paints in emancipatory colours, but which the others read in predatory terms. Karnataka is the last big state the Congress is poised to be divested of, which would leave it with only the relatively smaller Punjab, Puducherry and Mizoram. Already cash-starved, the loss will dry up a huge source of funds for the Congress. This will also be the 15th election the BJP has won, even if not decisively, since it came to power at the Centre four years ago.

That’s why Modi emphasised the idea of India’s political map getting progressively dyed saffron. “The BJP has spread to every corner of the country and is dedicated to resolve the problems of every region,” he told party workers at the swank new BJP headquarters on Deen Dayal Upadhyay Marg in New Delhi after the Karnataka results were out. 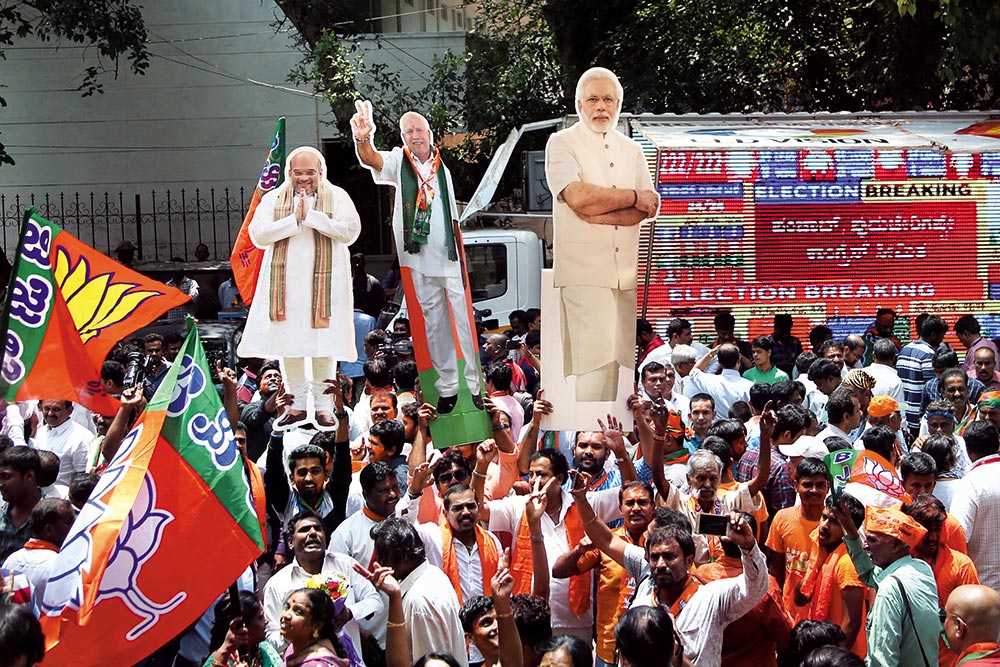 Senior BJP leaders tell Outlook it was a well-considered decision by Modi and party president Amit Shah to play up the results. “Initially, only adhyakshji (Shah) was supposed to address a press conference,” reveals a party general secretary. “However, at one time, when the trends showed a clear-cut majority for the BJP, it was decided to bring in the PM for a big celebration. It was finally Modiji’s call as he chose to stay with the plan even though the party fell short of the majority mark.”

“The optics were required,” he explains. “The number of seats may be less than our tally in 2008 (110), but given the country’s political landscape, even our emergence as the single largest party is significant, especially in the context of the 2019 general elections. A message needed to be sent to friends, foes and allies, who had begun to question the winnability of the BJP under Modi and Shah.”

If the BJP succeeds in taking Karnataka, it will control 21 out of India’s 29 states.... Karnataka is also the last big state the Congress is poised to be divested of.

Entering its last year, the Modi government has been battling a perceived anti-incumbency sentiment and a pervasive sense, especially after recent byelection losses in Uttar Pradesh and Rajasthan, that it has lost momentum. The farm crisis, rural distress and a poor record at job creation are being cited as reasons for the government losing its sheen. “Karnataka will end the speculation and reaffirm Modi’s leadership and Shah’s meticulous organisational skills,” says a party leader.

Shah himself prefers to have Brand Modi taking ownership of electoral victories, as was evident from his tweet: “Like the rest of the nation, the great land of Karnataka has shown its unwavering trust in PM Modi’s clean, transparent and pro-­development governance.” Buoyed by the results, Shah promised the ecstatic party workers gathered at the venue that the BJP’s winning streak will continue in all the remaining elections, including the 2019 Lok Sabha polls.

But some stern tests await the party. Now it has to gear up for the next round of assembly polls in Rajasthan, Madhya Pra­desh and Chhattisgarh, due later this year. If Karnataka had a strong incumbent fighting it out, these states pose a different challenge—they are all ruled by the BJP. The party has already reached its saturation point in the states in terms of Lok Sabha polls. In Rajasthan, it had won all 25 Lok Sabha seats in 2014, losing two of them in bypolls. Similarly, it had won 27 of the 29 seats in Madhya Pradesh, and 10 of the 11 in Chhattisgarh. With a sort of double anti-incumbency creeping up on it, both local and Centre-related, things are not placed ideally. 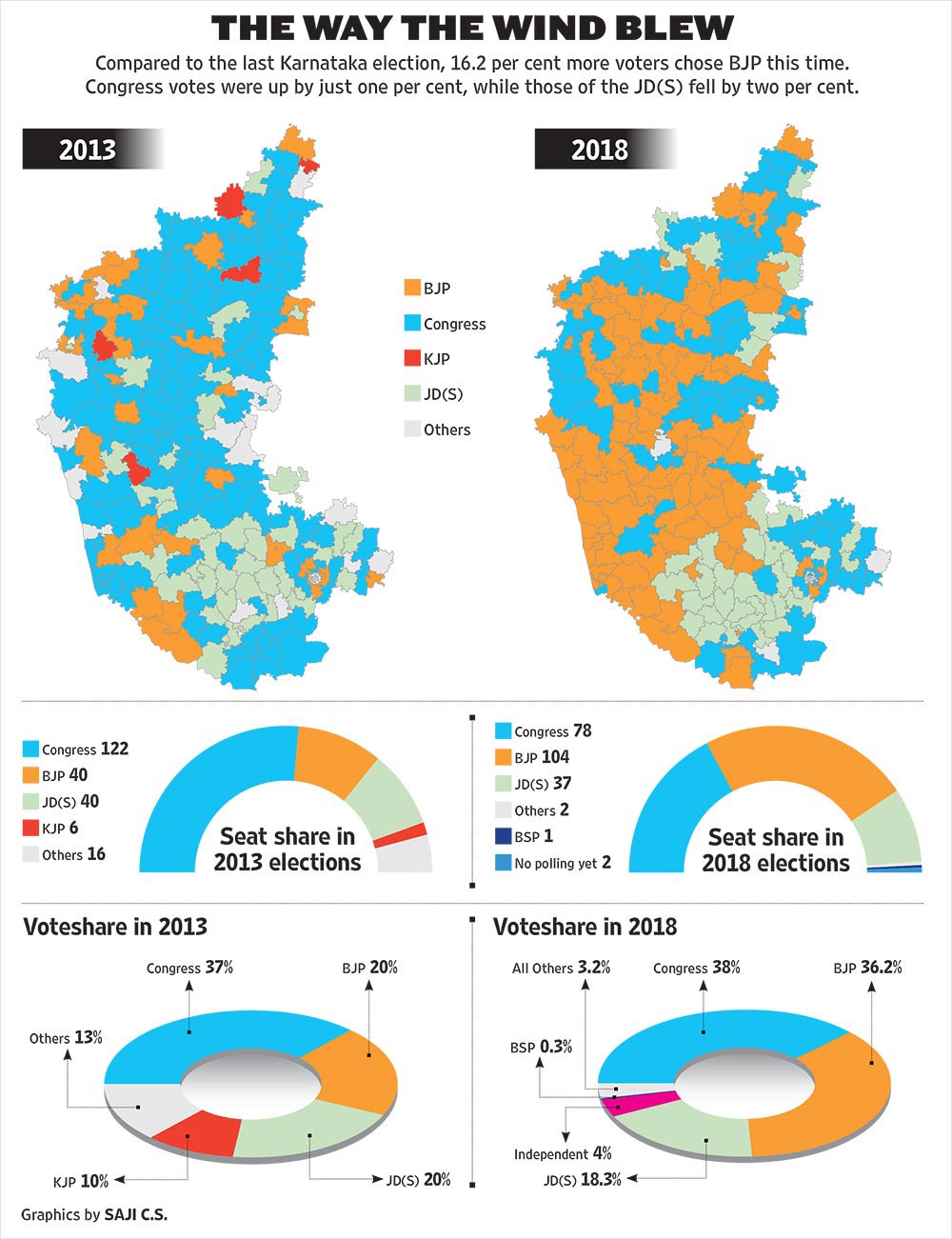 In the last assembly polls, the BJP had bagged 165 of the 230 seats in Madhya Pradesh, 163 of the 200 in Rajasthan and 49 of the 90 in Chhattisgarh. All three will witness a direct fight with the Congress. That usually goes in favour of the saffron party, says a Rajasthan state leader, but it can’t be held to be axioma­tic. If the BJP faces the grim prospect of losing a substantial number of seats in these states in the Lok Sabha election, in Rajasthan it’s on a sticky wicket in the assembly polls too.

In addition to these states, the BJP has already peaked in other big states, including UP and Gujarat, winning 73 (inc­luding two of allies) of the 80 Lok Sabha seats in UP, and all 26 in Gujarat. Its tally has gone down in UP by two after the shock loss in the Phulpur and Gorakhpur bypolls—which also gave advance notice of the kind of united opposition phalanx it may face in 2019. Astute enough to realise that a repeat triumph in the big states of the north and the west looks tough, Shah has been working on Coromandel Plan ever since he took over as party president. 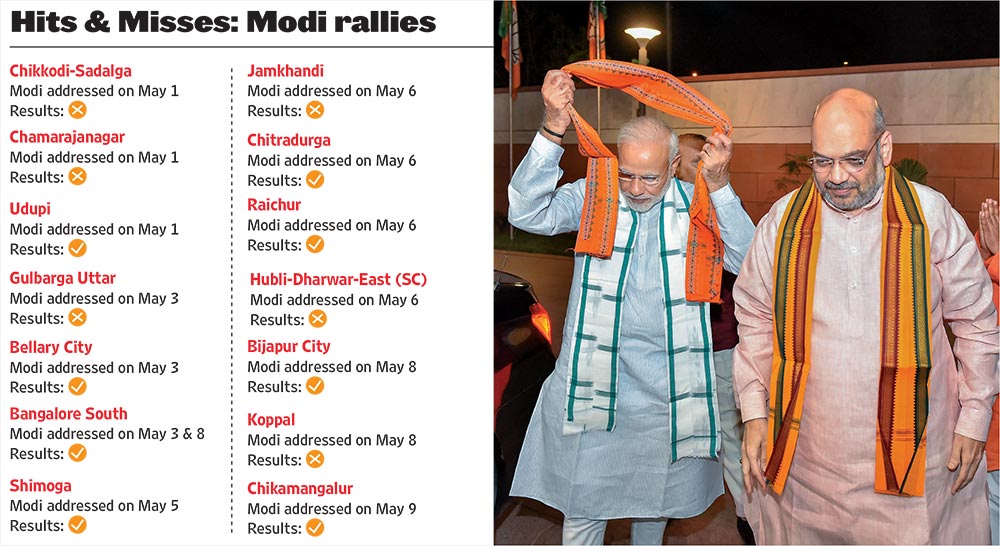 This entails boosting the party in Andhra Pradesh, Telang­ana, Tamil Nadu, Kerala and Odisha, in addition to West Bengal and the Northeast. “We’ve already made an impressive debut in the Northeast, which sends 10 MPs to the Lok Sabha,” says a BJP MP. “In Odisha too, we have become the main opp­osition, relegating Congress to the third place. Ditto in West Bengal, where our voteshare has been steadily increasing.”

But it’s the 130 Lok Sabha seats of the south that loom like those impregnable medieval fortresses of the Deccan’s ghats. Apart from Karnataka, the BJP has failed to make any inroads here. Despite the Modi wave of 2014, it won just 20 seats from the region—of which 17 were from Karna­taka, two from Andhra Pradesh and one from Tamil Nadu. Shah’s viewfinder has been fixed on these seats for a while. “He has identified some 50-60 seats in the south where the BJP stands a chance if an organised push is made,” says a senior BJP leader working in the area. “The groundwork is in progress: the cadres have been at it for three-four years. Now, the performance in Karnataka is bound to enhance its acceptability among regional parties.”

Realising that a repeat triumph in the big states of the north and the west looks tough, Amit Shah has been working on Coromandel Plan ever since he became BJP chief.

That the BJP managed to overcome a Congress campaign built on regional pride is a big step-up for it. Party MP Rajeev Chandrasekhar, who represents Karnataka in the Rajya Sabha, believes the party decisively fought off the Congress’s bid to create divides around themes like insider-outsider, north-south, Hindi-Kannada, Lingayat-non-Lingayat and Hindu-Muslim. “The Congress’s entire discourse was centred around creating fear and paranoia. They have shown they’ve nothing new to offer,” Chandrasekhar tells Outlook, mockingly adding that he finds the Congress decline “sad and tragic”, that it’s discomfiting to see the country’s oldest party “flaying around like this”. By contrast, he says Modi’s leadership qualities are acknowledged by all, “whether fan or critic”.

Chandrasekhar is bullish about the BJP’s chances in the south. Kerala and Tamil Nadu, especially, are screaming for a third alternative, he feels. “For Kerala, it has been a Hobson’s choice between the LDF and the UDF. Tamil Nadu suffers the Dravidian parties that compete over corruption. The BJP can emerge as the third pole,” he says. 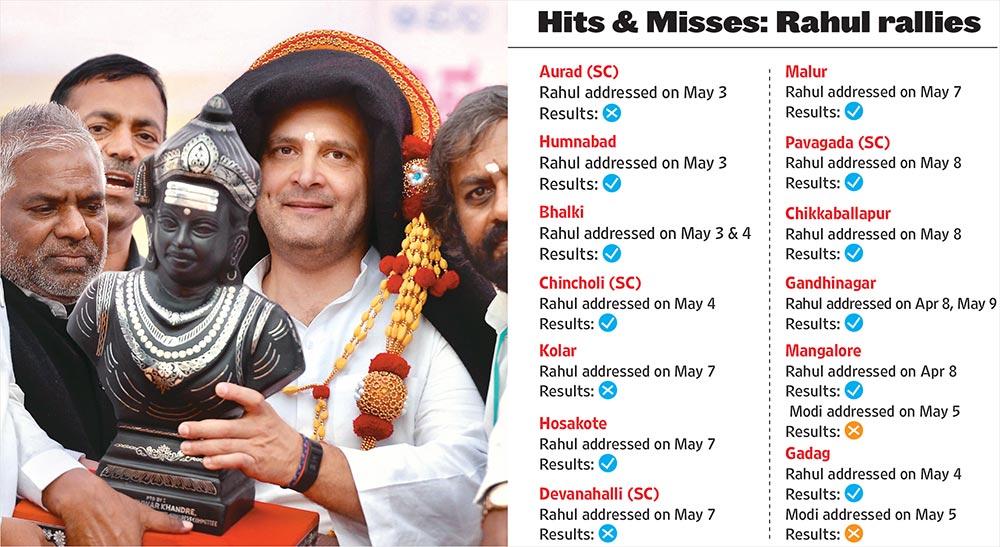 Between Andhra Pradesh and Telangana, the latter offers a more conducive situation for the BJP. “It can ally with the TRS, which may like to keep its relationship with the BJP, or come up as the alternative in case the Congress gets more weakened post Karnataka,” says a BJP office-bearer. Karnataka has burnished the BJP’s pan-India sheen, leaving it more confident vis-à-vis powerful regional satraps. Party sources say these results will also make the allies—existing, estranged and potential—do a rethink on their stance vis-à-vis the party.

BJP general secretary P. Muralidhar Rao, working in Karnataka for the past six months, says the verdict definit­ely makes the BJP more favourable to allies. “The BJP has emerged as the most important party in the south too. It now depends on the other parties if they want to join hands and share power with us,” he says.

Another senior leader offers a word of caution. “Since we did not get a majority, we should be more accommodating and flexible on the issue of allies. It will be in the fitness of things for the BJP to choose an alliance partner in Andhra, between the TDP and YSR Congress. Fighting alone may not yield the desired results. We lost an important ally in the TDP due to disagreements over issues like the imposition of Hindi and the terms of reference of the 15th Finance Commission,” he says.

Karnataka also settles the debate over Modi’s continuing popularity, says Rao, now that it’s proved his acceptance transcends the Vindhyas. It also raises questions about a missing alternative leadership within the BJP, both at the Centre and in the states. But no partyman will complain, as long as the Modi-Shah double-barrelled gun keeps firing.