Safe In These Arms

Guns are the new macho icons for city slickers. But is the rise in the gun-owning population a prelude to an increase in crime or its arrest? 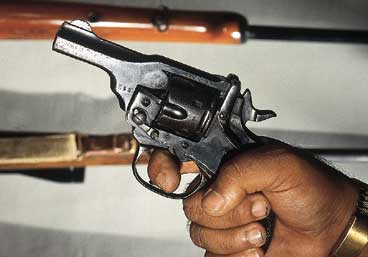 outlookindia.com
-0001-11-30T00:00:00+0553
Yuvraj Bhatia, all of six, is a pistol-toting schoolgoer whose Made-in-China plastic replica shoots tiny yellow pellets. A warning on the real-size toy warns that it is not to be aimed at humans and animals. But his doting parents don't think twice about making him display his aim and posture before guests and family friends. It is, after all, very much in the catch 'em young scheme of things. His advocate father Deep and homoeopath mother Meeta are both shooting enthusiasts. Besides, for people like Deep and Meeta, guns spell security in an increasingly lawless society. "I think allowing more and more people to use weapons will surely bring down the crime rate," says Bhatia senior, whose love for wielding fire-starters began early with an airgun, in Class 3.

To a casual visitor, the Bhatias' neighbourhood in Faridabad, a Delhi suburb, may seem like any other residential area, but as Deep points out, it is a place that makes guns absolutely necessary. "Just a few houses down from where you are sitting was the hideout of the dreaded dacoit Sunder Singh," he recalls grimly. There is not a night when Deep does not have his loaded .32 Webley Scott revolver within easy reach, in case "something happens".

Delhi businessman Amit Sareen, 29, has a Smith & Wesson revolver that gives him the confidence to drive around—late nights and alone—especially in the area where his farmhouse is located, on the Haryana-bound Mehrauli road. "Just having the weapon on me is enough," he declares. His is also a gun-loving family, owning a total of eight weapons, which he says, go a long way in making them feel safe.

Sareen and Bhatia are among a growing tribe in Indian cities who are arming themselves for a variety of reasons. Some do it to feel reassured with the cold-metal solidity of guns; others to petrify the unarmed with visions of ballistic might. Still others insist that they carry guns to counter rising crime. Being seen with a gun is even dangerously cool. The signs are everywhere: in Delhi, restaurants put up bold notices prohibiting guests carrying firearms, and sleek cars pull up at busy intersections with their passengers openly flaunting guns.

Delhi alone has over 58,000 licencees, each of whom can own up to three weapons: a rifle, a gun and, a pistol or revolver. Every year, the list of licensed gun-holders grows by anything between 1,400 and 1,600. They include traders, businessmen, lawyers and even government employees. In Orissa, the number of gun licences given out in Khurda district—which includes its sleepy capital Bhubaneshwar—was 700 last year, up from 500 in 1998. Strangely, Mumbai, infamous for its bloody gangwars, seems to be clamping down: only 51 applicants were granted licences last year.

People with licences insist they are arming themselves because they feel unsafe and the police is ineffectual anyway. Elderly Delhi resident J.S. Sharma, a former forest officer, is one among them. He sold his 'James Bond' Walther ppk pistol and bought a Smith & Wesson revolver recently. Sharma has used his gun to scare away a gang that attempted to mug him one night in Calcutta, and when some men tried to "make mischief" in his upscale Delhi neighbourhood. "The biggest use of a weapon is to be a deterrent," he says. Other times he is content with just cleaning and maintaining his ordnance rifle and glistening s&w. Faridabad-based property dealer Ramesh Chowdhary whipped out his .32 Lama revolver and shot at dacoits who carjacked his brother's Cielo two years ago."They were caught because I had a gun," says Chowdhary, with pride.

It isn't the metros alone where the gun-holding culture pervades. In lawless Patna, thirtysomething engineer-turned-businessman Satish Kumar says he rarely ventures out of his house without his two "reliable friends": his .12 bore rifles. They are as routine, he says, as putting on a shirt. "I start my day in the company of these two friends and end my day with them. Life without them is just unthinkable," he says, visibly empowered by his assault appendages. In Gurgaon, a Delhi suburb, advocate-turned-automobile service station owner Arun Bhatia, 33, needs his guns for security although "by God's grace" he has thus far not received any ransom calls or threats. But weapons still make good sense. "I am planning to train my children in shooting," he explains enthusiastically, "so that they can make a place for themselves in society."

Is it just paranoia that these ordinary People Like Us are pandering to when they buy guns? Or are they potential law-breakers? "People who have guns are most likely to use them," says Sridhar Sharma, psychiatrist and emeritus professor at the Delhi-based Institute of Human Behaviour and Allied Sciences. "One has to recover the 'cost' of the weapon. That is not achieved by keeping the gun hidden and unused."

Sharma is right. In the recent past, Delhi, for example, has gained the notoriety of being India's most trigger-happy metropolis. "I find Delhi pretty bad because people here seem to be succumbing to rage more often than not," says former Punjab dgp and president of the Institute of Conflict Management, K.P.S. Gill. Agrees Mumbai's former additional commissioner of police, A.A. Khan: "An average man who is not trained to use a gun could be a nuisance. He wouldn't know how to use it when faced with danger but will have a false sense of power just because he owns a gun."

These are concerns which are far from misplaced: licenced arms are being used indiscriminately as intimidatory devices these days. It was an armed and trigger-happy Delhi businessman who recently shot at a driver for having allegedly rammed into his Tata Indica. So furious was Tejwinder Singh that he didn't stop at beating up the Fiat Uno's driver but thought shooting him would be a lesson he wasn't likely to forget anytime soon. Thankfully for Sanjay Kumar, Tejwinder wasn't a sharp shooter. This May, Delhi exporter Kamal Kant Jain fired two rounds from his licenced revolver at a restaurant-owner. In May last year, another resident Jaswant Singh was shot dead in broad daylight following an altercation with two motorists. In Cuttack, Orissa, a two-decade-old business rivalry between two families climaxed four years ago with Kuna Mangaraj, a hotelier and liquor shop owner, being gunned down by members of the rival family at a busy city intersection.

Guns have an uncanny way of getting into the hands of people for whom the world is a shooting range. Hormone-fuelled farmhouse parties in Delhi have been known to end up in drunken brawls where guns materialise like parlour trick bunnies. Of course, ever since the Jessica Lall incident two years ago, the city police has banned entry of weapons in eateries. People like Sharma take no chances. "I always keep the first shot empty because it is possible that one may fire it in the heat of the moment," says he.

Guns are also giving their city-based owners misguided machismo, sometimes triggered by the increasingly violent politics on university campuses around the country.Phoolan's alleged assailant Sher Singh Rana is but a recent example. Dayashankar Singh, a former president of the Lucknow University Students' Union and chief of the local bjp youth wing, moves around with an armed guard and a licensed personal rifle as it adds to his "prestige both within and outside the university campus". "You have to see the way the younger students look up to us as heroes when they learn we have a personal licence," he says. And it isn't exactly firecrackers but his .12-bore rifle that Ikhlaq Chauhan, a hardware store owner in Muzaffarnagar, UP, uses during family celebrations. "Nowadays we use guns only during weddings, otherwise it's quite peaceful here."

For small-time politicians, guns of course, are a calling card. It was a speedy end to his rival that MP pcc general-secretary Inder Prajapati was aiming at when he shot at his colleague Manak Agarwal. A career farmer from Meerut and a national secretary of Sharad Pawar's Nationalist Congress Party, Zafar Akhtar's love for guns has a feudal ring to it. "The love for guns," says he, "is something we have inherited as hunting for game used to be a family passion." A life member of the prestigious National Rifles Association of India, Akhtar's passion for shooting hasn't really translated into medals or laurels. "I'm not a professional shooter. One becomes a member of such organisations because of certain privileges," he notes. In his case, the privileges have been supplies of ammunition at half the market rate.

Most gun owners claim they are careful about using—or misusing—their weapons. "Whenever I am drinking I am sure that none of my weapons are within reach," says Sareen. "I don't want another Manu Sharma (the Chandigarh-based businessman who allegedly gunned down Lall) case happening," he laughs.

But you can never be sure of how a licensed gun ends up being used. Last fortnight, Archana Jha, an 18-year-old schoolgirl, shot herself in the head, with her father's licensed revolver in Mandawali, east Delhi. Archana had been depressed after school-friends reportedly began avoiding her because of her poor results. Archana's father, S.P. Jha, a central public works department (cpwd) engineer, had bought the gun a year back.

It's not easy to revoke licenses either. According to dcp, Licensing, Delhi, Keshav Dwivedi, only a dozen-odd licences have been revoked since he took over in December 1999. But that is because to revoke a licence the owner has to be convicted, which is something that can take years.

Owning a gun also makes commercial sense to a lot of people. A ban on import of weapons since 1986 means people who can get them into the country—including nris who've stayed abroad for at least two years—don't forget to milk its business potential. "These days weapons are an investment. They can be sold after the five-year moratorium in the black market," says dcp Dwivedi. A small s&w gun, for example, costs between Rs 21,000 to Rs 32,000 in the US whereas it sells for anything between Rs 2 and 3 lakh in India. Clearly, a heady mix of vigilante defence, machismo and commerce can only lead to a further boom in licensed gun-holders in our cities. As thirtysomething Patna-based Kumar says chillingly about his two rifles: "It's not just for show, it also kills. Whoever challenges or intimidates me will be fired upon." And that, rest assured, is no idle threat.