Sacredness Is A Place

At Mother House, the devout still feel an indefinable presence 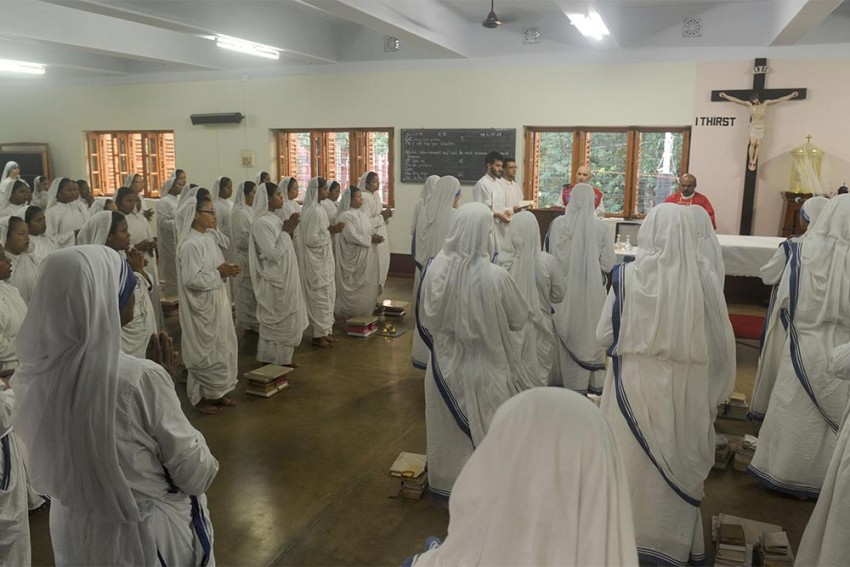 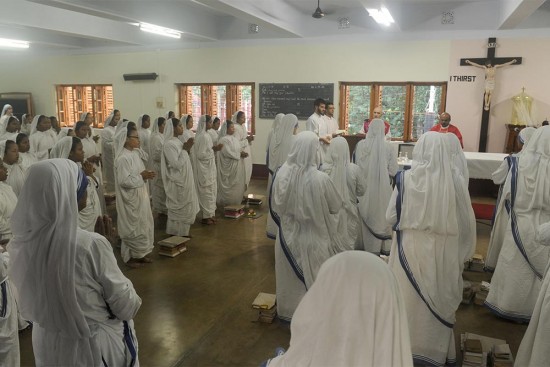 ‘Mother: In’. The words, inscribed on a thin strip of unpolished wood that hung outside a door of a dull-grey Calcutta building, always sent a rush of joy through the young mind of Rajeev Mookherjee, then a schoolboy, now a businessman in his forties. “Whenever I felt depressed, I visi­ted that house with my parents and somehow miraculously my troubles would disappear,” he recalls, almost echoing the Beatles’ lyrics, “When I find myself in times of trouble/Mother Mary comes to me/Speaking words of wisdom/Let it be.”

Only, this time it was Mother Teresa. The Albanian nun who, having dedicated her life to the cause of fighting poverty, disease and loneliness, avowedly for the love of Jesus Christ, and came to be known as Blessed Teresa of Calcutta. And visitors to her home in the city, known as Mother House, insist her service to the Lord did not restrict itself to the gutters. Mookherjee, for instance, is from a wealthy family, and he says she “transcended divisions of rich and poor and touched the lives of everyone, making the unhappy happy and the happy even happier”. And so, when Teresa was at home—and the sign read ‘Mother: In’—people poured in by the dozens, the hundreds and thousands for what they variously call “her healing touch”, “her soothing words”, “her blessings” or simply “a vision of her”.

T.T. Vergese, a former employee of the Rajasthan government, says whenever he got the opportunity he hopped onto a train to Calcutta just so that he could “be blessed by Mother Teresa and imbue myself with her divinity”. An American homemaker evokes the sense of a therapeutic encounter: “After an emotionally painful divorce, I saved up money for a trip to India, just so that I could meet Mother Teresa. I had heard that she had the power to cure even psychological diseases like depression. I don’t know about others, but I felt a deep sense of peace just being with her.” 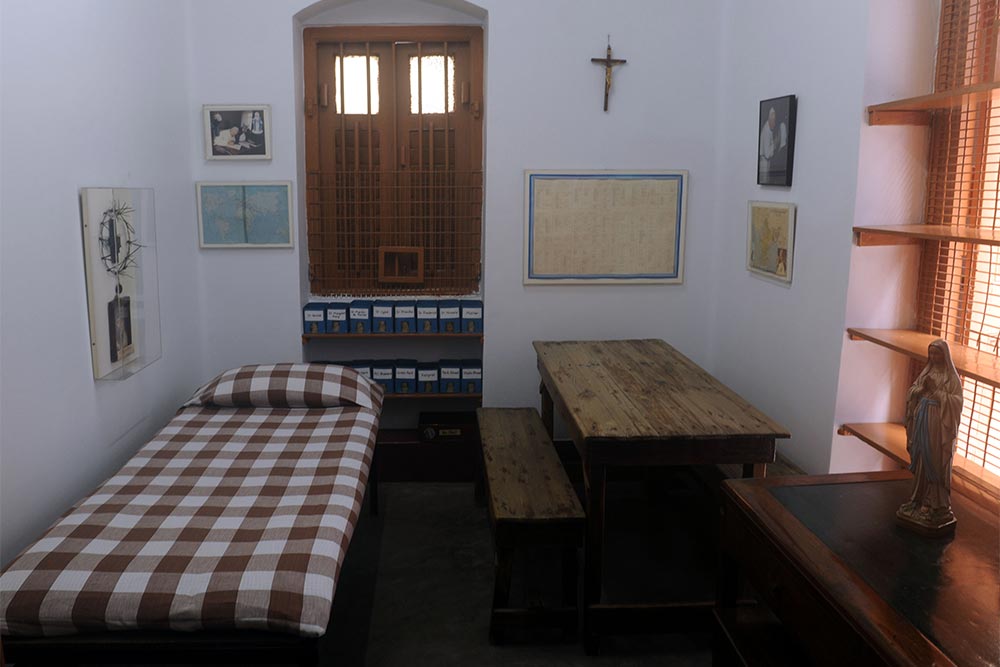 Her room, clean but unchanged

But what of now? Her living presence ceased to be on September 5, 1997. Has the magnetic pull of Mother House diminished in the 19 years since? What reason do people have to drop in anymore? Once a locus of thriving activity, full of prayer, devotional speeches and sermons, reading of scriptures and singing of hymns, not to mention a steady footfall of the world’s high and mighty, including heads of governments and royalty (Lady Di was a famous visitor), has not all the attraction abated now?

Not really, say insiders. A sister of the Missionaries of Charity explains the draw Mother House offers today. “It has become one of the most sacred spaces of pilgrimage for the Christian,” she says, pointing out that Mother’s tomb is situated inside the premises. “Devotees drop in here everyday to pray and seek Mother’s blessings.”

“From when she was living here in her physical body to now...the difference is just that.”

A section of Mother House has been turned into a museum, displaying Mother Teresa’s few earthly possessions. One of the only three saris she owned—all white with blue borders—is kept on a glass-covered shelf, neatly folded. The one sweater she wore, plain, collarless and colourless, is placed in an adjacent one. A pair of sandals, brown and fraying at the edges, is displayed nearby. A separate section showcases other memorabilia: laurels, medals, awards, other honours. After the theft in 2004 of Rabin­dranath Tagore’s Nobel medallion from the Viswa Bharati museum, Mother Teresa’s Nobel medal has been transferred to a sec­ret location for safekeeping.

The most intriguing section, where visitors spend hours, according to the sisters, is the wall displaying some of Mother’s writings—handwritten notes, letters, scribbled instructions, words of encouragement, unfailingly and liberally dosed with ‘love’, ‘blessing’ and ‘forgiveness’. “She never wasted a single scrap of paper,” explains a priest, pointing to a row of envelopes addressed to her but which she reused by opening them up and writing her replies on the blank parts (not necessarily to the same people who sent the envelopes).

Mother’s own bedroom is left unchanged. The tiny chamber is still furnished only with a small bed that just about accommodated her frail frame and a writing desk. No fan whirred overhead—she never used one. Only the sheets are always freshly-washed. “We change them daily,” says a nun. 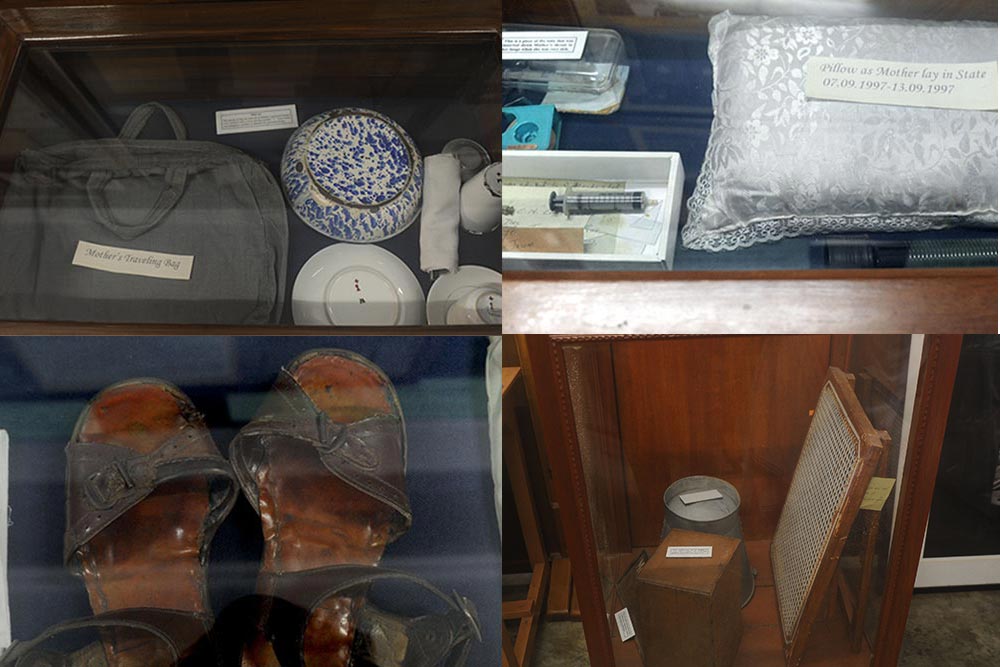 Among the bare essentials Mother used, now on display in the musuem section: some utensils, bags, pillows, sandals and a chair

“The only difference between when she was living here in her physical body and now...is just that,” observes Sunita Kumar, MoC’s official spokesperson. “There may have been a nominal drop in the number of people who do come, because some people did get drawn by her iconic stature. But ess­entially most people visit Mother House because of the work she did and these missions are still very much alive.”

The American homemaker has returned after 19 years—albeit with a “touch of sadness” because she cannot physically touch or see Mother. She now wants to volunteer for a project. Vergese, now 68 and retired, has spent these years “trying to give something back to Mother for all that she had done for me” by investing in agricultural farms, the food produced from which he supplies to Mother House.

Mookherjee now visits with his own children and wife and feels “her blessed spirit permeates the very environment of her home”. He is most intrigued by the fact that the wooden plate with the two words inscribed on it—’Mother: In’—is now a constant fixture, hanging from the door outside the dull-grey building. “In life, she was sometimes absent from Mother House, in death she is now permanently present. She is laid to rest here.”