The state's hyped employment scheme is in doldrums. But no one thinks it's time for serious revamp. 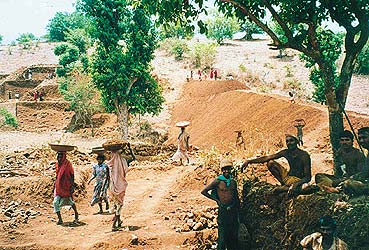 outlookindia.com
-0001-11-30T00:00:00+0553
During her first morcha early this year, Ranjana Kadu interrupted her speech every few minutes to make sure her thick rural accent could be understood by the 3,000-strong crowd. Her anger was directed against the state administration which, she alleged, had failed to provide enough work in the drought-prone Aurangabad district's Paithan taluka under its much-touted Employment Guarantee Scheme (EGS). "Eventually, after months, it sanctioned the completion of a half-built road, which had anyway been washed away during the previous monsoons," she triumphantly told Outlook.

But Kadu wasn't too happy with her success. For, the Maharashtra government has to provide work to any person applying for it within 15 days, a guarantee under EGS, started in 1973 to create durable assets and generate rural employment. But the EGS, which was dubbed a success and provided a framework for many anti-poverty schemes launched by the central government, is now in doldrums.

Recently, in reply to a pil in the Bombay High Court, the state admitted it had not been making its contribution to the EGS fund since 2000. In fact, the state cumulatively owes close to Rs 3,000 crore to the fund which, it feels, has enough money to provide adequate employment to the poor. As per the rules, taxpayers in Maharashtra pay an additional profession tax, all of which goes into the EGS fund and the government is required to put in an equivalent amount.

But therein lies the contradiction. The funds are not being used at a time when the state has been hit by several years of bad monsoons (except this year) leading to an increase in rural unemployment. "The pressure on this scheme has increased because of the droughts in the last few years," says Anurekha Chari, who is doing a research project, funded by the Sussex-based Institute of Development Studies, on the EGS scheme. With the state's sugar cooperative sector facing its worst crisis, the number of unemployed has been on the rise. Recently, Nand Kumar Jhantre, collector, Beed district, told an EGS review committee that "this year the sugarcane cutting work has reduced and, therefore, the demand for EGS has gone up in Beed."

That explains why the attendances at the EGS sites doubled over the last 4-5 years to 18 crore in 2002-2003. But if that's true, then why are the funds available under the scheme not being used? The problem stems from the various glitches at the implementation level. For instance, a legislative committee found that payments are often made to workers after months rather than at the end of a weekly cycle. It also takes months for work to be created after an application is made, although the state's deadline is 15 days.

"Often people need to put in a word with someone powerful to get the EGS work," says Neelam Gore, a member of the state assembly's upper house whose ngo reviewed the scheme in more than a dozen districts this summer. "Basically, the scheme is too centralised," observes Maitreyi Krishnaraj, who too analysed the scheme in Thane district. "Every application passes through too many hands before the work or money is sanctioned," she adds.

Researchers like her also find that the EGS worksites hardly have the facilities they were once lauded for, like creches, sheds, medicare and drinking water.What needs to be done is to drastically restructure EGS. But then, no one seems to be thinking along these lines. At the meeting of all the Congress CMs in Srinagar early this year, party president Sonia Gandhi said similar schemes should be implemented across the country. And the state that was implementing it felt it was not really that hot a programme!